The power of performance

Dance offers older people many physical and social benefits, but performing to an audience makes the greatest impact on wellbeing, believes Jemma Bicknell. 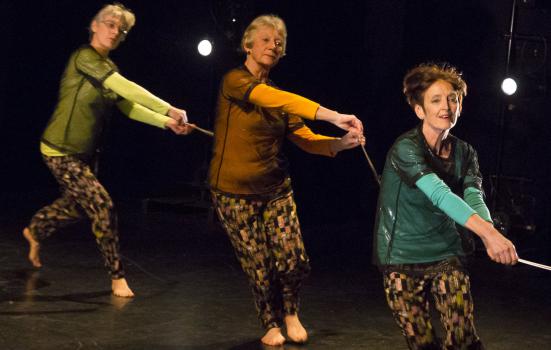 In my work as a producer and choreographer of older people’s dance, I’ve repeatedly seen how the goal of putting on a performance can draw out and enhance real benefits beyond the physical and social.

By providing a safe space in which to take risks, preparing and putting on a performance can boost people’s expectations of themselves and thus raise their self-esteem. It can facilitate new relationships based on shared endeavour and can lead to a range of emotions that come with performing, including the huge sense of accomplishment derived from being part of a group that puts on a good show.

‘Older people’s dance’ can mean many different things – dance for older, frailer people, for those with specific health conditions, such as Parkinson’s disease or dementia, but also for more mobile, ‘younger-older’ people.

Marie Kamara was a professional dancer in her youth and now in her eighties has a collection of injuries that affect her mobility and confidence. When I worked with her, being given the space, time and right support to keep dancing and performing was very important to her. It reminded her that she still possessed exceptional performance qualities and was still able to pursue her passion in a supportive environment.

Wherever a dance professional’s focus might be in their work with older people, most agree that performing for an audience can have transformative effects, not only for older dancers but also for the audience. The range of emotions that comes with taking part in a performance can make it a significant life event.

These include experiencing a healthy amount of anxiety leading up to an event, learning to overcome obstacles – both individually in memorising the choreography and collectively in navigating group dynamics – and being part of the creative process.

Danielle Teale, who has worked with older people in a range of settings, as well as with English National Ballet in its Dance for Parkinson’s programme, said: “The impact of a performance opportunity for older dancers is possibly even more of a thrill, given that it’s often suggested that movement confidence can decline in our later years with the disconnect between body and mind.

“The sense of accomplishment that comes with giving a performance can provide a surge of confidence which can boost physical health through improving self esteem – greater confidence in movement can lead to an increased range of movement potential.”

By being part of a performance, older dancers can demonstrate their present, creative contribution to society, challenging limiting stereotypes such as the perception of older people as being inactive and a drain on national health resources.

Alexandra Carter, a member of The Elderberries, DanceEast’s older performance company, recognises that her reason for participating is the joy of dancing itself. She believes the concept of wellbeing in relation to arts participation should be viewed more broadly than in terms of the social and physical benefits that are typically noted.

The positive social consequences, as well as the strong sense of accomplishment, that wrap around being part of a performing dance company, are what many of The Elderberries highlight when talking about their experiences.

Donna Brenchley said: “I know exactly why I enjoy being an Elderberry – the camaraderie and the support is just fantastic, possibly my favourite bit. To all be working towards the same goal, with such warmth, empathy and humour, and then achieving it, is lovely.”

DanceEast will be holding an event (HOST) as part of the Move, Be Moved Festival in July to debate the shifting attitudes to older people in dance and celebrate the artistry of the older dancer.

This article is based on a feature called ‘Staying healthy, being happy and pushing boundaries’ in Animated magazine produced by People Dancing, the UK development organisation and membership body for community and participatory dance.

The power of performance