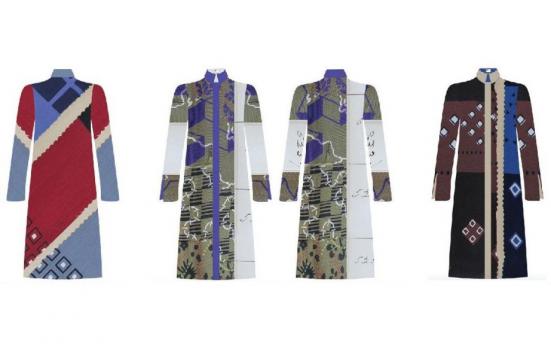 With an estimated 90% of museum and gallery collections thought to be in storage (and collections continuing to grow), the expense of managing museum collections seems unsustainable. However, museums are devising newer and more innovative models to ensure the sustainability of their collections, particularly in the regions where local government cuts have hit museums and galleries hard. Here are two case studies from the north west of England that show what can be achieved.

In 2015 the Macclesfield Silk Heritage Trust worked with media and textile artist Andrea Zapp to produce the Paradise Mill Collection of silk garments. Inspired by the pattern books, textiles and machinery, Zapp created a series of dresses, scarves and ties. The collection has been shown at London and Paris fashion weeks and Zapp has since gone on to develop a bespoke line of ‘Made in Macclesfield’ goods for the museum’s shop.

The Paradise Mill Collection is part of Macclesfield Museum’s ‘Opening up the pattern book’ project which explores both how to make the collection more accessible and how to maximise its commercial potential. Zapp’s fashion collection has helped to raise the profile of the town’s museums beyond its boarders and opened up possibilities for innovative developments. It has also become a great starting point for conversations with stakeholders interested in working with the museums.

International touring exhibitions are a common income earner for large national institutions but Bury Art Museum managed to break into the foreign market in 2012. Contemplating an era of constant cuts, the scheme was devised by its manager Tony Trehy who saw the economic prospective of touring the town’s vast art collection, including many works by Victorian masters, to international venues.

With a plan to replace conventional subsidy with earned income, the first exhibition, ‘Toward modernity: Three centuries of British art’, which included prints, paintings, drawings and watercolours, toured to six venues in China, including Beijing.

The success of the exhibition validated a model which many had considered to be too risky for a small regional museum as only large national museums had worked on such a scale before. Helping to raise the profile of the north west of England in China, at least three of the venues showed an interest in future exhibitions.

Continuing to build on the model, the museum is using its experience in international practice to lead a consortium of museums (Greater Manchester Museums Group) in generating touring exhibitions from the region’s great art collections to foreign galleries.