The chance to dance

Kelly-Anne Collins shares the story of how one dance support network diversified – creating a platform to showcase new work – and may just have triggered a revolution for dance in Northern Ireland in the process. 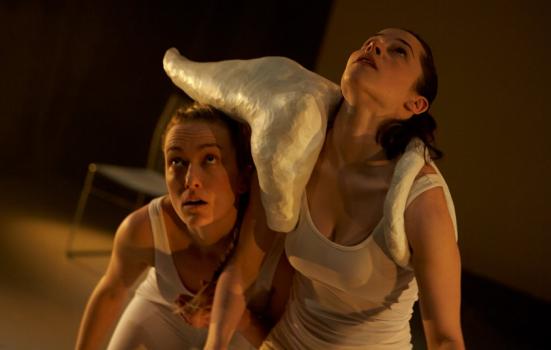 Leonie McDonagh and Stephanie Dufresne in ‘The Reason I Jump’, choreographed by Suzannah McCreight

At Dance Resource Base (DRB), delivering our first pilot dance platform EVOLVE earlier this year marked a significant moment of transition, not only for the artists involved but also for our own position and impact in the local dance sector. As a relatively young organisation, our focus had previously been to provide a range of training, advice, promotion and information support services to dance professionals. Undertaking a dance platform initiative for the first time represented a significant departure in the type of work we generally undertake and an important development for the dance scene as a whole.

Like all new initiatives, the impetus for change lay in many moments, including countless career advice sessions where independent artists articulated their frustrations at the artificial ceiling on their career progression. This frustration came from the endless training and research and development weeks (that they were able to individually access funding for) without the opportunity to actually create anything (there are no funding avenues open to individuals to do this).

As far back as 2013, we took the opportunity to discuss these issues with our primary funding body, the Arts Council of Northern Ireland (ACNI), while it was developing its new strategy. This was followed by several smaller sectoral development projects, opportunities for funders to compare the Northern Ireland dance infrastructure with those available in the rest of the UK, and direct conversations between ACNI and younger, independent artists about their frustrations. After several attempts to find funding for a new platform initiative in a restricted public funding climate, last year we finally secured support for a pilot scheme.

The idea of a platform to showcase new dance work is simple enough. With financial and moral support from ACNI, we were able to pay four choreographers, chosen by an industry panel from an open application process, to produce a short dance work in progress that would be performed in a mixed bill event in April at multi-arts venue The MAC in Belfast, our incredibly supportive main venue partner which was able to quickly grasp the potential of such an initiative.

The choreographers, Oona Doherty, Suzannah McCreight, Bridget Madden and Gary Rowntree, received a bursary and production budget for the project, a week’s creative development with professional dancers in the studio as well as a collaborator to focus on one particular element of theatre – in this case, composers creating original music and visual artists developing different elements of design. Each choreographer was mentored by a more experienced choreographer, who acted as a sounding board for their ideas and challenged them to find ways through the process. A lighting designer also mentored them to integrate a more creative visual into their work.

Undertaking any initiative for the first time is always a risk. While some of the choreographers had experience in producing dance work, others were at the very beginning of their careers. A week is a very short period of time to create a new, short work (even if the expectation was that it would be a work in progress). Add to that the fact the choreographers were showing their work in a mixed bill performance context before an audience in a key contemporary arts venue, and that they were being paid – they certainly felt pressure to make the most of this opportunity.

For us as an organisation, there were new challenges including building a platform infrastructure from scratch to serve the needs of the nearly 30 artists from across the UK and Ireland working on the project. We are confident that we delivered an artistically successful project, which many people are eager we repeat. And we are proud of the way all the artists on the project committed to the concept and supported each other throughout. There was a palpable sense of community fostered by the project, in a city where practitioners can often feel disconnected from one another.

Beyond having new material for their portfolios, the choreographers were positive about the value of working with other artists and designers to better understand how they might create work and work in a genuinely collaborative way. The experience also gave them new insight into facing fear and channelling it creatively. They valued the professional recognition of their abilities and potential that came from being chosen for the project.

For us there was an additional insight in the potential of this activity for dance audience development. Comments from attendees who had not been to contemporary dance events before noted that they felt more comfortable attending dance now. They felt they understood it better and were interested in seeing more dance as a result. Key factors behind these comments included the short duration of each piece, the diversity in the styles of the work presented and listening to the artists discuss their work at the end of the performance.

What started out as an evolution in the development of new dance artists may have set in motion a quiet revolution for dance in Northern Ireland.

The chance to dance