From Manchester to Wuhan

Debra King and Sarah Perks share their experiences of delivering a multi-artform project as part of the sister-cities celebrations between Wuhan in China and Manchester. 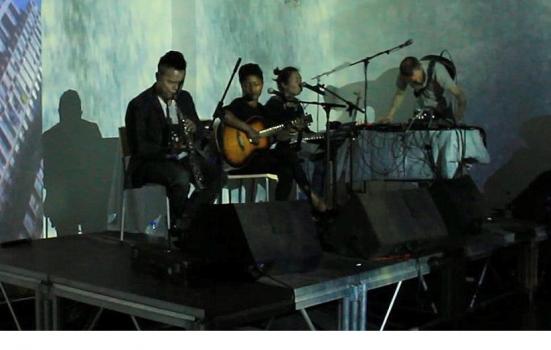 The Wuhan project started while we were talking about our respective international projects – we realised that by collaborating we could pull two locations, a group of creative people from Brighter Sound and Home and various artforms together. Around the same time we heard that Manchester City Council was looking for a creative way to support the signing of its sister cities agreement in Wuhan, and the British Council was keen to mark the opening of the British Consulate in Wuhan, China. Our partnership and ideas for a project flowed from there.

We embarked on a research trip to Wuhan and were fortunate to receive advice from the British Council, the British Consulate and the government department UK Trade and Investment about Wuhan’s key arts and cultural organisations. Through a process of meetings across the city we secured a strong partnership with K11 Art Foundation and VOX LIVEHOUSE. It was a fascinating and motivating trip. Wuhan is a major city with a population of over 10 million. Its GDP and rate of growth have increased at a remarkable rate and it was extraordinary to see how its rate of growth was impacting on the way of life.

In a world where much is often over-produced... presenting the culmination of EIGHT as a live showcase carried with it a palpable sense of risk and excellence in the same mix

We returned enthusiastic to drive the next phase of the programme forward. Various Skype meetings followed and we soon evolved the idea of EIGHT – eight artists, four from Manchester and four from Wuhan collaborating over a period of eight days to create a piece of music and film for the signing of the Manchester-Wuhan sister agreement and to mark the opening of the British Consulate.

The four organisations respectively chose two artists. We were keen to identify people who were not only excellent and innovative within their disciplines of film and music, but who were also able to suspend their ego to enable a genuine collaborative process to take place. After a period of planning, together with our production team and the artists, we set out to deliver and create EIGHT in Wuhan.

All the people we met were friendly and welcoming. It was palpable how much China is opening up to new possibilities, commercially and economically as well as across education and the arts. The concept of creativity and how to support young people and emerging companies to develop their creative thinking skills was a regular topic of conversation.

Our partners and the Wuhan artists were intrigued and excited about the collaborative process. We presented at a seminar at VOX’s rock school and during the discussion that followed there was a sense that musically this process was not embedded in their practice. In particular, it was interesting that many of the musicians were playing covers of songs and arrangements rather than original material. In addition, the concept of working across music genres was a novel idea to many of the Chinese musicians. Far more common was siloed music genre bands across punk, heavy metal, rock and pop, attracting genre-specific fans and segmented audiences. Another observation was that cross-genre (and cross-artform) work is on the whole not part of the cultural ecology. This was seen as a possible barrier for Chinese bands in Wuhan to tour in Europe – and one that many bands we spoke to were really keen to explore.

We were fortunate enough during both trips to have translators with us at every meeting. Most students spoke pretty good English but our inability to speak Chinese remained a barrier to some degree. We noticed that when Nick Whittingham from the British Consulate spoke fluent Mandarin at the press launch people were really pleased. In terms of cultural relations, any long-term collaboration with China should run alongside a course in Mandarin, mirroring the spirit of collaboration.

There are certain cultural barriers – or at least differences – that it was also important to be aware of. We learnt that a vital part of business etiquette is giving out your business card with both hands and then placing the business cards that you had received in front of you at meetings. The other clear message was to be careful not to offend people about western preconceptions of China – by mentioning its human rights record or censorship policies. As with all international work, patience and diplomacy was essential as well as being able to communicate artistically and creatively.

With only eight days to create the new piece of work, the timeframe was extremely tight. People had to think on their feet and respond to many challenges – this was exciting but also involved holding your nerve. It was inspiring to see everyone’s drive, commitment and enthusiasm to ensure the partnership succeeded.

On the eighth day, there was a great turnout for the performance and exhibition opening. With new music and live visuals, there was a real buzz and many angles to draw everyone in. People were really excited by the beauty of the performance. In a world where much is often over-produced and excellence is associated with perfection rather than the unknown, presenting the culmination of EIGHT as a live showcase carried with it a palpable sense of risk and excellence in the same mix. And that was truly exciting. The project will continue with the artists from Wuhan visiting Manchester in October.

From Manchester to Wuhan