A story of survival

When Making Music learnt that it was no longer a National Portfolio Organisation, it was forced to rethink how it operated. Barbara Eifler describes a difficult six months. 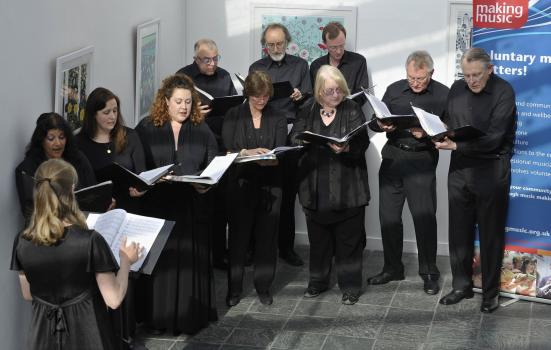 Singers at a Making Music conference in Derby
Photo:

It was the phone call I did not want: in July 2014 Arts Council England (ACE) informed me that from April 2015 Making Music would no longer be funded as a national portfolio organisation. This meant the organisation was confronted with losing nearly 25% of its annual income. It was not catastrophic, but it was very significant, especially considering that three years earlier we had already had to adjust to a 50% grant reduction. Salami-slicing would no longer do the trick – drastic action would be required.

So, what do you do? Well, you make a coffee and you call your chairman. And then you tell your staff as they knew the announcement was due. There was no mincing words with our then 16 (12 full-time equivalent) employees. They were told that the size of the cut meant that we would have to change significantly and that would very likely mean redundancies.

The board of trustees swiftly gathered to consider the way forward. The first question it debated was whether anyone would miss us it if we closed down. The answer was a resounding “yes” – just as it had been, so I subsequently discovered, when we had faced a similar crisis in the 1980s (as the National Federation of Music Societies). Next, the board considered whether we should merge with another organisation. But there was not an obvious candidate, and mergers require a longer lead-in time than the nine months before the funding cut would bite. The board concluded that the only option was to restructure the organisation and charged me with leading that restructure.

A busy few weeks lay between the original announcement, that emergency board meeting and the regular board meeting five weeks later which would agree an outline plan. They included a meeting with ACE, at which there was straightforward talking, support and encouragement to consider a Grants for the Arts application to tackle organisational development. Fellow CEOs, partners and friends got in touch and I mercilessly picked their brains (which they were very willing to have picked). At one-to-one meetings with each member of staff I found out what they could do to maximise our income and reduce costs. And I read anything I could find on change management.

There were external communications to be managed. We had to tell the members of our 3,000 plus amateur and community music groups, because they needed to be prepared for changes to come. Partners and other stakeholders had to be informed in a way that ‘accentuated the positive’ as the song goes. Naysayers had to be vigorously gainsaid, while there had to be frank acknowledgement that no longer being an NPO would have severe repercussions on our modus operandi.

The plan ultimately submitted to the board identified three phases of action: stabilisation, to ensure that our costs would be in line with our future income by the end of March 2015; organisational development to address the three most urgent issues preventing us from becoming a more effective and sustainable body; followed by a last phase of strategically examining how we can more proactively pursue our vision in future.

Oh yes, our vision. Prior to entering this crisis we had already looked long and hard at what change we would like to make to the world, and how we would do it. We had formulated a clear vision, mission and four objectives which made it so much easier to develop a plan now. We already knew our priorities – it was a question of how to focus our diminished resources to still create an impact.

The implementation of the plan was the harder task, as it unfortunately meant that we had to make some staff redundant (now down to nine full-time equivalent). It meant writing funding applications and taking a dispassionate look at our services to focus on the ones of most importance to members and most significance to the amateur music sector. As well as support from fellow CEOs, friends and mentors, I received the right level of response from the board, and particularly our chairman, who acted as a sounding board, reviewed communications, arranged additional meetings to allow me to keep up the pace of change and reduce the period of uncertainty for staff.

So where are we now as we start on life after NPO? We have Grants for the Arts funding to develop the organisation. Uncertainty and redundancies are behind us and the future looks bright. Thanks to the change in our funding status, by the end of 2015 we will be in a better position to develop our full potential as the number 1 champion and supporter of the amateur music sector than we were at the time of that fateful phone call.

Ultimately, ACE may have done us a favour. Though we will probably be applying for NPO status again in 2018, because there is so much more we could do to encourage everyone to engage with music, for their own benefit and that of their communities. After all, we truly believe, to paraphrase ACE’s own aim, that great music is for everyone.