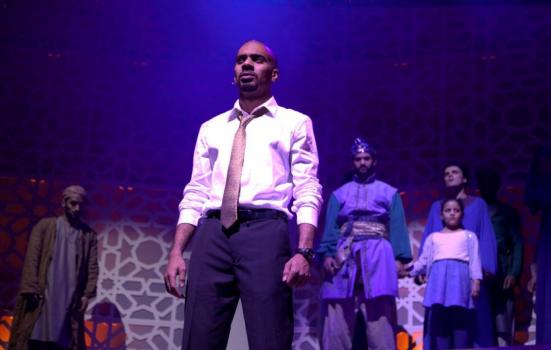 The National Youth Theatre (NYT) was established as the first youth theatre in the world in 1956. Fifty-nine years on, we are still a global pioneer in youth arts and over the past 14 years have worked with over 300 young actors and artists from the UK on foreign soil. We are not talking about glamorous international tours or middle-class gap years here. It has been hard fought and hard taught cultural exchange with local participants, with both sides learning lessons through true collaboration and friendship. Along the way we have performed in Olympic ceremonies, sold classic British cars in China and survived the odd deportation.

Last month we announced a new partnership with Live Nation in the Middle East, which will lead to us working with local young community participants to stage ambitious productions in the United Arab Emirates (UAE). Our motivation to continue this work is creative, cultural and economic. Research shows that international cultural exchange builds trust in the UK which leads to increased international trade – and that in turn boosts the UK economy. We have also found that our brand of work is greatly appreciated and more in demand abroad than it is at home. With our Arts Council England subsidy representing just 10% of our turnover in 2014/15, income from international activity has become an important part of our business model. Most importantly in the long-term though, this work is nurturing a new generation of global citizens.

I have learnt that to break new ground you have to be prepared to deal with constant change and stick your neck out, because it rarely comes without controversy or resistance

As well as being global ambassadors for British culture, many of the young people that have worked with us are now global creative professionals. Their unique experiences and practice built on working with other cultures, often in groups where there is little to no English language, makes them stand out from their peers both at home and abroad. Polly Bennett, who performed with us in China and Abu Dubai, and has worked professionally with us in Saudi Arabia, says: “Working internationally has had a huge impact on my personal practice. In rehearsal rooms on home turf I am always calling on the patience, forward-thinking and resilience I've developed from working abroad. As a practitioner, working internationally enables me to see the true value of what I do – theatrical discoveries are bigger, personal journeys are greater and the connections made are stronger.”

However, being the first to engage on the ground is never simple. Though the rewards are life-changing, the politics are never-ending. The term ‘ground-breaking’ is pretty high on my pet-hate list of lazy arts jargon, but it feels appropriate to describe a project taking young female theatrical talent to Saudi Arabia to engage young females in the art of performance for the very first time. Working around the world from China to Saudi Arabia, I have learnt that to break new ground you have to be prepared to deal with constant change and stick your neck out, because it rarely comes without controversy or resistance.

In 2008 we were the first UK theatre company to perform at the National Centre for Performing Arts in Tiananmen Square in Beijing. Many legitimately questioned whether we should be performing in China at all, given the controversy around human rights in the lead up to the Olympics and the level of artistic censorship. We were told not to mention the three Ts – Tiananmen, Taiwan and Tibet, with the last being the most sensitive. Our response was to propose a production of Shakespeare’s The Merchant of Venice performed not just by young NYT actors, but also ten young Chinese actors.

After consulting with our membership and trustees, we decided that we couldn’t deny the young people from both nations the opportunity to work together. The Chinese cultural authorities also signed off the proposal. Shakespeare survives censorship because it is deemed safe. However, our production was anything but, with a young black actor playing Shylock. The play’s themes of persecution, racism and inclusion and their relevance undoubtedly rang true to local audiences and our young international cast.

People talk about the world getting smaller through social media networks, cheap air travel and expensive aspirations. However, given the extremist events in politically and socially vulnerable parts of the world, it is fast becoming apparent that to bridge cultural differences you have to be in the room, not just online.

Working with young women in Saudi Arabia presents different, culturally specific challenges and opportunities, as testified by the talented and brave young women we have taken to work out there. They represent the best of Britain and the international friendships and understanding that they forge bodes for a better future for all.