Convinced that the current trend towards an instrumentalist approach to arts funding underestimates the true value of the arts to society, Graham Henderson urges arts organisations to seek new sources of earned income with greater confidence. 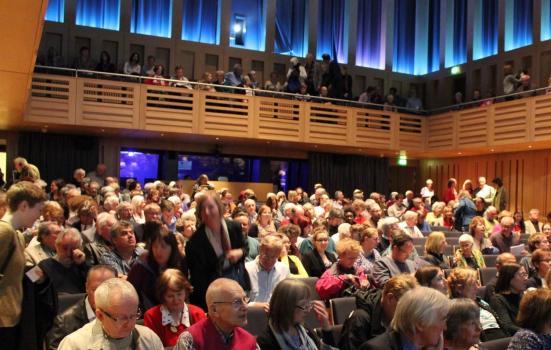 Something significant is happening in the arts. Faced with the prospect of continuing cuts to already much reduced grant funding (indeed with the prospect that government funding for the arts may disappear completely within the next few years), it has dawned on the arts sector that it is facing an existential crisis greater than at any time since 1945. As far as I am aware, no political party is campaigning in the current general election for the preservation or restoration of government funding for the arts, however much we believe they should be.

For those of us who have run national portfolio organisations (NPOs), this situation has been apparent for several years. Meetings of NPOs organised by Arts Council England (ACE) are dispiriting occasions where ACE has been clear about the desperate situation in which the arts sector finds itself. Cuts, in and of themselves, have not been surprising. What has been more surprising for me has been the unwillingness of the government to support enterprising new business models in the arts, helping innovative arts organisations to help themselves. Those who were closely involved in the Catalyst funding bids will recall that the government caused ACE to change the rules affecting such grants midway through the application process, effectively restricting the scope of this funding to private philanthropy only. Something that could have helped arts organisations develop new sources of earned income ended up being used to employ professional fundraisers. These fundraisers chased shrinking sources of grant funding among trusts and foundations, and tried to change, within a few short months, the entire culture of arts philanthropy in the UK. The results were, quite predictably, very disappointing.

The arts sector needs to look to its own future with renewed enterprise, and with a passionate belief in the importance of the arts to a thriving society

I was involved in proposing an arts investment fund, designed to support arts organisations with great ideas to develop their sources of earned income (see my article in AP in June 2012). This proposal finally bore fruit earlier this month with the launch of a £24m Arts Impact Fund, supported by ACE and the Cabinet Office and managed by Esmée Fairbairn Foundation. But instead of being a source of desperately needed micro-finance for enterprising arts organisations, it has been effectively hobbled by the insistence that all investments should achieve ‘social outcomes’. Organisations that receive investments from the fund will not only have to make a profit from their activities but also need to contribute to narrowly defined social objectives. Any prospect for small and medium-sized arts organisations to use this fund as a source of seed capital for straightforward income-generating activities has been lost, leaving enterprising arts organisations still stranded in an instrumentalist ghetto.

This makes it all the more interesting that new voices are starting to be heard. At the launch of the BBC’s Get Creative programme in February, Deborah Bull made an impassioned plea for the arts not merely as a means of achieving ‘social outcomes’ or boosting the profitability of ‘creative industries’, but as the lifeblood of a civilised society, underpinning our education, values and our entire notion of active citizenship. In other words, an instrumentalist approach greatly underestimates the true value and importance of the arts to society. The person sitting next to me commented that Deborah Bull should be made culture minister.

From the same platform the actor Timothy Spall spoke powerfully about how arts education in school had transformed his sense of what could be achieved in life, and changed him as a person. This testimony was rendered all the more powerful by the fact that the Warwick Commission report, published two days earlier, lamented “the systematic removal of the arts from the education system”, driven out by narrow results-based targets which “know the price of everything and the value of nothing”. It is clear that, far from helping the economy, such policy errors are fatally undermining the ability of the UK to produce the creative and imaginative individuals, whether for careers in the arts or in business, on whom the country’s successful future depends.

Involved in the same BBC initiative, 64 Million Artists is a consultancy championing the active participation of all citizens in the arts. This effectively turns the clock back to before 1945 when the Labour government scrapped support for participation in favour of funding ‘professional’ arts organisations through an Arts Council. It potentially augurs a dramatic shift away from such professional arts organisations towards an emphasis on the vital role the arts play as a fundamental building block of society, and as a means of developing the social capital on which our pluralistic democracy relies for its survival.

For my part, I continue to champion the potential of arts organisations to help themselves by developing new sources of earned income. Last month Poet in the City, the arts organisation for which I am now the public art consultant, signed a contract for the delivery of a major piece of public art inspired by poetry, a contract that will hopefully result in a significant surplus in unrestricted funding flowing into the charity’s accounts. This has been achieved without a penny of external support or investment. A few more jobs on this scale will allow a small arts organisation to significantly reduce its reliance on grant funding. And in my role at the Rimbaud and Verlaine Foundation, the sister organisation of Poet in the City, I am about to conduct our first crowdfunding experiment, building on what I believe to be the potential for a completely new and much more direct relationship between arts organisations and the broader communities of support which sustain them. In the absence of support from government, the arts sector needs to look to its own future with renewed enterprise, and with a passionate belief in the importance of the arts to a thriving society.

Graham Henderson is the CEO of the Rimbaud and Verlaine Foundation.
www.rimbaudverlaine.org