Panto, ballet and nativity plays are standard Christmas fare in the UK, but what are they enjoying in other European countries? Alex Bryne has been finding out. 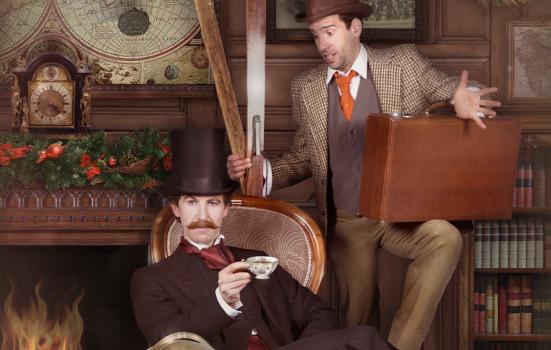 NIE’s current Christmas show ‘Around the world in 80 days’

New International Encounter (NIE) is a pan-European ensemble, so when it comes to putting on a Christmas show we have numerous backgrounds to draw upon and many different ideas about what a Christmas show could be. When you look at theatre traditions in other European countries during the festive period, a few things are clear: a number of countries have some kind of nativity, ballet seems to be universal, but pantomime is very British (and some of its features are so ingrained that we don't realise that they do not work elsewhere).

Usually someone blacks up to play Balthazar, a tradition that I don’t think would go down well here

Our last Christmas show, Hansel and Gretel, is touring Norway this year, and apart from translating it into Norwegian, we have had to adapt some elements of it, for example booing the villain and cheering the hero have had to be changed. There is not a tradition of family theatre in Norway – parents bring their children to the theatre but strangely do not expect there to be anything in the show for the children. Shows that appeal to all age groups that you find in the UK are just not widely known.

Our long-time collaborator and designer Marie Chemnitz is from Copenhagen, where many theatres produce a Christmas cabaret, often with an adult focus, and the biggest of these is held in the Tivoli Gardens called The Crazy Christmas Cabaret. It started about thirty years or so ago with a British cast, which is why there is a lot of English humour, and why they do boo and cheer. It has been directed by British actor Vivienne McKee every year, so it has its own running gags and characters.

In the Czech Republic, where our performers David and Iva come from, Christmas Eve is the most celebrated day, so many theatres are open again on 25 December. Its Christmas theatre traditions are not as big as ours, but they do have ballets such as the Nutcracker and Christmas concerts are quite popular. Puppet theatre is a big deal over there, and most towns and cities have their own puppet or children’s theatre with an ensemble and dedicated space.

Another of our performers Unai is from Spain, where they are more religious about Christmas than most of us. Its theatre traditions relate to Christ and the three kings – Unai says they would be a bit bemused by panto. They have nativity plays with music and readings from the bible called ‘Pesebres’, and the big towns have a parade on 6 January to celebrate the wise men visiting Jesus. Gaspar has brown hair and a green cloak, Melchoir has long, white hair and a gold cloak, and Balthazar has a purple cloak and black skin. Usually someone blacks up to play Balthazar, a tradition that I don’t think would go down well here. And all the kings ride on a big float shaped like a camel...

Having done this little bit of research, I now realise how strong our Christmas theatre traditions are here. Every country has its own performance traditions, but to have so many of ours rooted in theatre makes you feel quite proud.