A new touring model capitalising on word-of-mouth recommendations indicates that touring is not dead after all. Jo Towler explains. 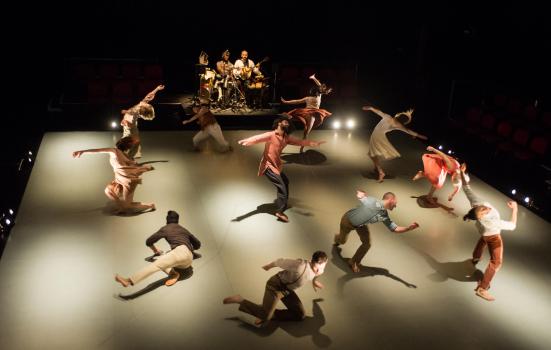 Touring and its validity were discussed at one of the seminars at the Independent Theatre Council’s conference in September. The conclusion by many of the delegates was that there are still signs of life in the touring model, but that new air needs to be pumped in for it to survive in these times of reduced public funding, increased travel costs and dwindling audiences. Like many, we at Protein had recognised that the traditional dance touring pattern of ‘one-night-stands’ in venues needed refreshing. Audience research seems to indicate that those who are new to dance or rarely watch it rely on word-of-mouth recommendations. Yet when a production is only in a venue for a night (or possibly two) the opportunity is lost to go and see it as it has already moved on elsewhere in the country. Another factor is the popularity and growth of immersive theatre.

Our response was to create Border Tales, which ran for a minimum of four shows in each venue and seated the audience on all four sides of the performing area. Not only did this give a chance for word of mouth to spread and generate a new audience, but its setting gave the audience an opportunity to get closer to the action and interact with the dancers. The subject matter was highly topical, looking at multicultural living in the UK.

Although theatrical shows often appear in a venue for many consecutive nights or weeks, this was a new departure for contemporary dance, given that it is still a relatively young artform and does not yet have the following of ballet or theatre. Thankfully there were people willing to support this venture: ICIA Bath/Bath Dance, The Place, DanceEast and DanceXchange each gave us their venues for at least four nights. The Place took the biggest risk by hosting 16 performances over three weeks. However, in terms of total number of shows, this remained similar to the first tour of our previous show LOL (lots of love), with 29 performances of Border Tales against 27 of LOL.

Sarah Trist undertook an evaluation of the Border Tales tour, working with the venues to discover whether we attracted more people via word of mouth who were new to dance. We handed out ‘landing cards’ to the audience at the start of the show, similar to those given out on a plane, which asked how they had heard about Border Tales and how often they attended dance performances. This data was also collected from audiences at other dance performances in the same or a similar venue so a comparison could be carried out.

So, did it work? To be honest, the data is not conclusive. We were only able to obtain comparison data from three of the venues, and one of those comparisons featured a dance company local to the area as opposed to one on tour. However, the headline is that 16 of the 29 performances sold out. Looking at the London shows, there was a definite trend towards more people citing word of mouth as the run continued, with an average of 21 people ticking that box on the last three nights of the show compared to just ten for the first three nights. An average of 52% of people indicated word of mouth as a way they heard about Border Tales prior to their attendance. In the first week, two shows sold out, one of which was a press night, and in the last week all six sold out in advance. There was also a statistically significant association between people who were infrequent dance attenders and the length of the run.

The Place’s box office data indicated that there were many people who went there for the first time. Not only that, but feedback on the landing cards and anecdotal conversations both online and in person suggested that many of those were also attending a dance theatre show for the first time, or for the first time for many years.

Following the success of Border Tales, we feel we can build on the marketing strategy in which word of mouth is given time to work and encouraged through social networks and ambassadors. Our new productions will be in each venue for a minimum of three nights. We will continue our aim of appealing to new audiences by creating a show in which they will be even closer to the performers. In addition, such a touring pattern presents a saving, both financial and environmental, in terms of transport and technical costs.

We recommend this model to other dance companies. It requires a buy-in from the venue so the run is properly supported and marketed. We had a joint meeting with all the marketing teams from each venue, our marketing consultant and our Artistic Director Luca Silvestrini in advance of the tour, so that they had an idea of the content of the show. Venue representatives also attended extracts and previews of the work as it was created, so they could see it develop and how best to market it to their own audiences. Importantly, we also gave workshops and other participation activities in each venue before the run so we were present in each area for longer, giving the visit more of a residency feel and almost certainly starting the word-of-mouth process.

It may not be the definitive model to enable touring to make a full recovery in the UK, and it may not be right for everyone, but it has presented a valuable insight for us into possible alternatives and blown some new air into the touring model to take it off life support. For now, at least.