On the wilder side of Europe

On an arts programme secondment with the British Council in Ukraine, Liz Pugh has been witness to the turbulent geopolitics of the past six months. 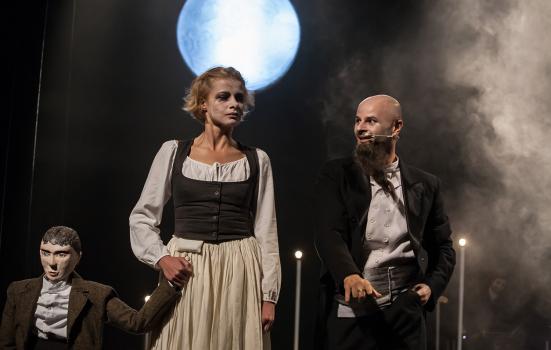 Woyzeck, directed by Dmytro Bogomazov, at the Kyiv Academic Drama and Comedy Theatre

After 20 years running Walk the Plank, my secondment in Ukraine with the British Council has taken me right outside my comfort zone: working on my own but for a global organisation, and in a country where I don’t speak the language, was always going to do that. But I had no idea that I would witness such tumult. Three weeks into my visit, Ukraine’s President announced the deal with the EU was off and protests began. By the time half a million people had taken to the streets outside my flat two weeks later, I knew I was witnessing something extraordinary in terms of the tectonic plates of democracy shifting.

My role has involved exploring opportunities for UK companies and venues and collaborators in Ukraine, and looking for partners to invest in Ukraine’s arts programme. Connecting professionals from the UK creative sector with the arts teams in different countries stimulates a mutually beneficial dialogue. I will return to the UK with insights which could only be gained beyond the EU; a sense of perspective on our arts landscape and full of gratitude for the democratic rights that we have.

I have watched a Russian director rehearse new work at the Ukrainian national theatre and Woyzeck at the Kyiv Academic Drama and Comedy Theatre (pictured above). I have sought out performance in unusual locations, such as Hamlet staged by Dakh Theatre in the Dovzhenko film studios. I have met a violinist who plays in the National Symphony Orchestra who told me how the orchestra kept rehearsing during the riots, with burning tyres and sniper fire a daily challenge. I have visited extraordinary contemporary arts spaces funded by oligarchs, many of whom have a keen interest in visual art (perhaps because you can buy and sell it). Of course, it is harder to commodify dance, theatre or literature, and there are no shiny new theatres in Ukraine.

The landscape is split, as with many post-Soviet countries, between state-funded institutions that are old-fashioned in their structure, with limited aspiration for change, and often a tired repertoire they can’t afford to renew. Then there are independent producers and artists that are trying to work differently, but with even less support.

The Opera House I visited in Donetsk in eastern Ukraine has a permanent staff of over 500 people, giving 116 performances per year. The Royal Opera House in comparison gives 428 performances with around 250 full-time staff (based on its annual report). In the same city, there is Izolyatsia, a really exciting contemporary arts platform in an abandoned factory, and home to Ukraine’s only FABlab‎.

There are already signs of change brought about by the protests and subsequent wider social transformations. The arts community unexpectedly united after the revolution to unanimously nominate Olesya Ostrovska-Luta for Minister of Culture. She eventually became the First Deputy Minister and is completely open to discussion with the sector. Crowdfunding has become a popular model for the arts, with platforms like Spilnokosht that mobilised the creative class to fund online magazine Korydor, documentary filmmakers Babylon’13 and public broadcaster HromadskeTV.

I gave a public lecture on art that builds communities as part of the Centre for Contemporary Art Foundation‘s Culture 3.0 series, aimed at arts managers and journalists. This was followed by workshops with those cultural commentators and artists, keen to hear how the UK is transforming its post-industrial landscape using arts and culture as a driver. Examples of how a creative economy works, concrete suggestions on engaging communities, and tips on stimulating entrepreneurial practice have been of particular interest. However, our experience in its western European context is often far removed from the reality of the arts scene here in ‘Wilder Europe’. It is crucial to find appropriate partners, and drawing on the expertise of colleagues in eastern Europe has often been useful.

I have been working with British Council Young Learners (14 to 16 year olds) to create conversations about what culture looks like to them and why it matters. In the UK, young people talk about culture like they are a part of making it and they own it, whereas young people in Ukraine tend to see culture mainly in terms of folkloric tradition.

Walk the Plank started with a ship – we have got mobility in our DNA. We turned up, did the show and sailed off again. That ability to do something extraordinary and then disappear is both our success and one of the biggest challenges. I feel the same about this work with the British Council – how to make it sustainable, as well as relevant and inspiring? My time in Ukraine should not just be a stone thrown into the pond. I have tried to think about how the ripples might spread outwards, productively. So, in an elaborate ‘Show and Tell’, I am organising a lantern procession with 120 young people on my final weekend to celebrate 80 years of the British Council worldwide. An artist from Walk the Plank is coming for a week and demonstrating how UK organisations might invest in making international links. National Theatre Wales and Wales Millennium Centre ‎have already responded to a call-out (there are clearly parallels in terms of a bilingual country sitting next to a much larger neighbour), and the Artists International Development Fund ‎could offer an opportunity to artists interested in working beyond the comfort of the EU’s borders.

Working with cultural leaders here at this momentous time has been a privilege, as well as an exchange. I trust that the arts in Ukraine will thrive in the post-Maidan landscape. (Maidan means both square and public space. Maidan Nezalezhnosti was the name of the square occupied by the protestors, and then Maidan became the name for the whole protest movement.)