How has Northern Ireland’s cultural sector responded to equality and community relations since the Good Friday Agreement? Nicole McNeilly finds out. 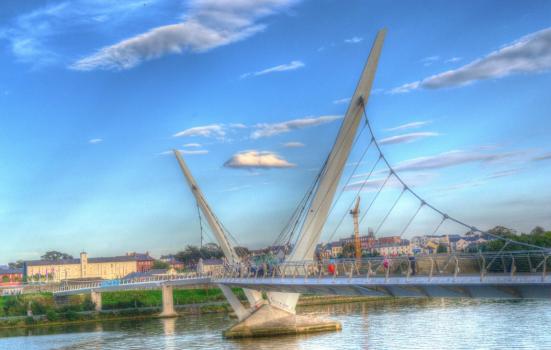 The Peace Bridge in Derry-Londonderry
Photo:

A feeling of ‘post-conflict fatigue’ has marked Northern Ireland since the Good Friday Agreement of 1998, conversely paralleled by the continued threat of paramilitary action, low public confidence in policing and marked divisions in education and social housing1. There is a lot of work yet to be done: the Arts Council of Northern Ireland’s (ACNI) statement that racism is “the new sectarianism”2 shows that a society grappling with two polarised cultural identities is now struggling to understand community interaction in a rapidly diversifying society. The direct reference to ACNI’s Intercultural Arts Strategy in the most recent good relations policy, ‘Together: Building a United Community’, published in May, is explicit recognition of the cultural sector’s legacy of engaging with the issue in the past and it has implications on the implementation of current or future cultural relations strategy. It outlines ACNI’s dual responsibilities in securing the confidence of cultural traditions and encouraging interaction within and between communities.

Since the 1998 Northern Ireland Act, Northern Ireland has had its own tailored equality policy that has attempted to ‘mainstream’ (i.e. centralise) equality concerns into everyday life. Mainstreaming requires all bodies and organisations in receipt of public funds to proactively address good relations in decision-making and policy creation, and so, as a publicly funded body, ACNI’s strategic direction is influenced by legislative trends. The NI Executive and Office of the First Minister and deputy First Minister (OFMdFM) have, since 2005, been consistently criticised for being unable to frame cultural difference and community interaction in a manner that will bring about a more stable and shared society. The Together policy is yet to be adopted by the Northern Ireland Assembly and lacks a plan for implementation, but it has not had the same level of criticism and uproar normally associated with the publication of equality policy. The policy frames community reconciliation on a macro-level, suggesting that the OFMdFM has shown progress in its avoidance of the ‘groupism’3 found too often in Northern Irish ‘politico-religious’4 society.

The implementation of the 1998 NI Act aimed to normalise5 positive duty towards equality into society as a whole, explaining the prevalence in policy of terms such as ‘embedded’, ‘neutral’ and ‘naturalise’. Yet there has been widespread disillusionment over rhetoric-heavy peace agendas and a bureaucratic policy implementation method that has introduced an admin-heavy ‘tick-box’ culture that has achieved “procedural, but little by way of substantive, improvement in equality”6. It is a contentious idea that any process of normalisation can take place when conflict dominates living memory (see Insight on Conflict’s timeline of the conflict). Yet the relationship between equality legislation and society is key to understanding how mainstreaming has impacted the cultural sector. It is widely accepted that advancement in equality policy has its roots in social action and a grassroots desire for change (consider the Arab Spring).

Yet, despite this inherent social desire for peace, the need for a top-down and enforced implementation method has been acknowledged. When interviewed, one cultural leader stated: “At the beginning it [equality legislation] sort of pushed against the norms of society and now it’s one of the norms of society.” Another supported this, suggesting that mainstreaming has been vital in bringing about a change in public opinion in that “the mind-set is now different from what it was before the legislation came out”.

At the time of the Good Friday Agreement, Ronan Bennett argued that “[the] ‘Troubles’ scarcely feature[d]: not in art, not in life”, going on to argue that on “the rare occasions the conflict penetrates the arts, its treatment tends to be apolitical, disengaged, sceptical...”7. Conversely, it is widely recognised (at least anecdotally) that the arts respond to social issues long before policymakers but there is no baseline data on the Northern Irish cultural sector’s response to the conflict before mainstreaming.

My research surveyed cultural organisations through questionnaires and interviews, to investigate to what extent mainstreaming acted as implicit cultural policy8 by impacting programming. When surveyed, 61% of respondents acknowledged that there was some link between cultural programming and equality concerns, but less than 45% agreed with the statement that equality legislation had an impact on programming. An analysis of programme design methods shows a similar story. Using Kawashima’s discussion of micro- and macro- factors, the survey results showed that, just as in the rest of the UK, the top three micro-factors on programming are financial restraints, quality and audience demand. In Northern Ireland macro-factors on programming included public good, social inclusion and current artistic trends. 70% of respondents said that they felt social responsibility influenced programming.

If we accept that issues of equality are now normalised in the social and public sphere as a result of mainstreaming, cultural organisations appear to be responding organically to equality concerns and not due to a legislative pull. It could be further argued that mainstreaming both consolidated and stimulated positive action towards equality in the cultural sector. The cultural sector is proactively creating its vision of a ‘normalised’ society, supported by ACNI but not led by them. The direct reference in the most recent published equality policy suggests that the OFMdFM has a high level of confidence in ACNI, showing a trust in the extensive past work of cultural organisations in addressing a contentious issue and future. To use Lipsky’s concept of ‘street-level bureaucracy’9, they are both implementing policy and informing its creation. Mainstreaming has imbued cultural organisations with a confidence and independence in responding to contentious issues that are too often bound by rhetoric. In supporting and stimulating interaction between all communities, including those involved in the centuries old conflict, the Intercultural Arts Strategy moves beyond the limitations of multiculturalism and ‘living together but apart’ towards an inclusive understanding of a normalised diverse society.

Nicole McNeilly currently works as Grants Coordinator at PRS for Music Foundation and contributed to the industry programme at Belfast Music Week. She is also a musician and improviser.

This article is my response to the Arts Council of Northern Ireland’s (ACNI) article on its Intercultural Arts Strategy which appeared in ArtsProfessional this summer. It is adapted from my dissertation for an MA in Cultural Policy (City of London University) focussing on devolved cultural policy trends in Northern Ireland.