Walk the Plank seeks to bring out the best in both people and places, as demonstrated by its recent show in Derry-Londonderry. Liz Pugh explains how. 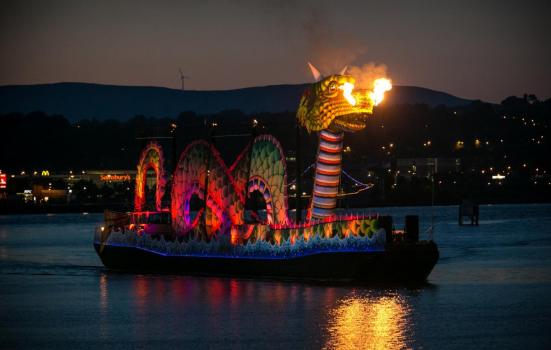 Over twenty years ago at the height of the recession cracks had swollen between communities, and people on the edges were missing out. As theatre makers, we wanted to find new audiences in new places, and if they could not come to us, we would simply go to them. The UK’s first ever touring theatre ship set sail and Walk the Plank was born.

Key to how we work is a desire not to simply parachute into a community. We have always sought to bring out the best in both people and places and that can only be achieved by work that is informed by and owned by the local population. But why bother to engage at a participatory level? In a country where governing parties hold price in high regard – over that of  value – why should engaging communities be part of our work? After all, we know that large-scale events can generate investment…

Earlier this year we collaborated with Frank Cottrell Boyce to create a landmark event for the first ever UK City of Culture in Derry-Londonderry. ‘The Return of Colmcille' featured over 1,000 local participants in the most ambitious outdoor arts event that Northern Ireland has ever seen. When asked why participation on this level was key, Frank quoted GK Chesterton: “People did not love Rome because she was great, Rome was great because people loved her.” He hit the nail on the head.

What makes The Return of Colmcille so extraordinary is the power it holds in terms of making people not only proud of themselves but proud of their cities and towns. If the people of a city cannot see its potential, then its most important advocates remain unheard. To achieve pride of place you require pride in people.

Fundamentally, art unlocks your imagination – it actively encourages you to explore what is not already there. By engaging people in our work at a grassroots level, we open them up to all kinds of possibilities. They see both themselves and the places in which they live in a whole new light − once reluctant participants transform into willing advocates. But how do you go about engaging people on a grand scale especially in a city like Derry-Londonderry with a traditionally divided community? The answer is to make people understand their similarities, rather than their differences. We refocused the city’s lens on shared tales of the city often left unheard, and in doing so, brought people together from all walks of life.

We collaborated with community gateways such as North West Regional College, the Verbal Arts Centre and the Nerve Centre. We introduced ourselves to community figures within the city, galvanising interest through word of mouth. We enlisted seamstresses, dancers, actors, makers, doers and thinkers − a long line of amazing people with a wealth of creative talent. We held no preconceptions – you mattered as much to the project if you were part of a dance troop or had never set foot on a dance floor in your life. We built a team of local experts to ensure that the project had roots in the city and its surrounding areas, using this as an opportunity to build the capacity of Northern Ireland’s creative workforce. Local story-catchers dug deep, quarrying tales from all corners of Derry-Londonderry. This was a project rooted in community, with stories from its heart, told by its people. Cynicism held in some quarters slowly bubbled into a curious enthusiasm.

As the crowd stood as one on the banks of the Foyle while our fire-breathing, 18-metre high monster confronted the city’s beloved Saint, the real value of community engagement on this level became clear. On our way back to the airport, our taxi driver confessed that it was not the best thing he had ever seen in the city – it was the best thing he had ever seen in his life. (He probably said it to countless others too – an advocate if there ever was one.)

Liz Pugh is Co-founder and Producer of Walk the Plank.
www.walktheplank.co.uk