Stepping out of the silos

New approaches are refreshing our ideas about what constitutes art and science, and new technologies are enabling the blurred boundaries between the two to be broken down, according to Dick Penny and Verity McIntosh. 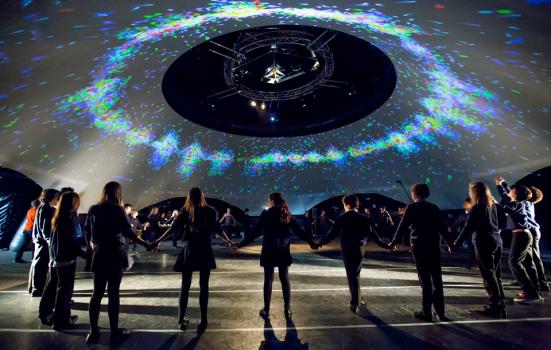 The experience of walking into the 21m, 360o dome installed in Brunel’s Passenger Shed in Bristol is something akin to walking into the eye of a giant, whose iris is made up of a million swirling and glowing fireflies. As you venture in, a neon figure emerges on the wall of the dome, displacing and collecting these sprites as it moves. You extend your arm and the glowing figure does the same, flinging out energetic particles from your fingertips as though firing them from a gun. Before you know it you are moving your own body in a way that would have embarrassed you only moments ago, eager to trap those two nitrogen molecules in your arms and hear the sounds they make as they collide with one another in your captive embrace.

“You’ve all seen atoms in text books looking like balls and sticks but this doesn’t do them justice. Molecules are dynamic and constantly in motion,” explains danceroom Spectroscopy (dS) lead creator Dr David Glowacki as he is surrounded by enraptured Year 9 pupils from Bristol’s Fairfield High School, here to experience this remarkable, immersive simulation of the invisible air all around us. He finishes the two hour experience with a compelling description of why the ‘dance’ of CO2 makes it such a ‘good’ greenhouse gas.

A high-performance computer is running algorithms, visualising the usually invisible world of atoms and molecules in real time as per the latest research in nanoscale activity. Xbox Kinect cameras place the participants in the midst of this atomic soup. “Turn up the temperature, please” Glowacki calls to the control desk, and as the energy of the particles increases, they whizz around the dome, some locking together in loops as their attractive properties bind them in dynamic tension. Co-creator Laura Kriefman from Guerilla Dance Project then brings together a large group of 14 year olds to hold hands and spin around in increasingly giddy circles as they see the energy fields that they are collectively generating and the impact that they have on the now visible and tangible molecular realm.

The real benefit of projects like danceroom Spectroscopy is the opportunity they give us to refresh our ideas about what constitutes art and science, allowing us to explore how art, science and technology can be woven together to transcend traditional and binary categories. dS manages to be at once a science visualisation, video game, social experiment, digital art and dancefloor – a real eye-opener for those of us used to putting on arts events, and one that has worked so well, we are now working with the Royal Society of Chemistry to create teaching material that will translate the experience to classrooms across the UK.

Within Watershed’s Pervasive Media Studio community this potential to cross over from art to science and back is what really excites us. Our collaborators come from professional backgrounds as diverse as quantum chemistry, dance, music, computer science and visual art, able to feed off one another’s questions and ideas. For us, some of the most interesting work emerging today is found on the blurred edges between art and science, with new technology as an enabler.

We are seeing a growing range of intriguing approaches towards future possibilities. There is Pocket Spacecraft, a crowd-sourced citizen science project that will allow thousands of ordinary people to send their own thin-film spacecraft with printed electronics, artwork and basic sensing capacity to the moon; and designer Helen White’s lyrical translation of real-time solar wind data into magnetically generated resonant sound in her work ‘Solar-wind chime’. Helen’s beautifully crafted aluminium chimes hum and sing in response to the same forces that trigger auroras at the Earth’s poles.

Science, art and technology are potent motivators of social and cultural change.

Elsewhere, we are seeing games design offering new avenues for scientific enquiry, with the Wellcome Trust’s Gamify Your PhD connecting indie games studios to biomedical researchers to challenge the conventions of science communication. At this year’s Gamescom in Cologne, the UK Game of the Show was awarded to Cascade, co-designed by games company Fayju and Dr Jody Mason, a leading biochemist. Cascade is a game set in a brain under the siege of Alzheimer’s disease. Moving between brain cells you have the power to stabilise them against this onslaught. The environment and gameplay are based on compelling research to suggest that certain therapeutic interventions at a biomolecular level can have a powerful effect against the disease.

Another fascinating trend is the DIY Bio movement, taking its cues directly from the tech-driven hackspace and maker communities, and applying open source, rapid prototyping, participatory approaches to synthetic biology and bioelectronics. In places like GenSpace in New York, Madlab in Manchester and community labs around the world, innovators with arts rather than science backgrounds are performing feats such as isolating, sequencing and cultivating their own DNA, and supplanting bioluminescence naturally occurring in jellyfish into other organic structures using genetic building blocks freely available online. Findings are voraciously shared online without undue reverence for academic publishing models.

Science, art and technology are potent motivators of social and cultural change. Our experience suggests that when we stop placing these disciplines into silos, choosing instead to value the expertise inherent to each and encouraging the edges to blur, we start to see work that sizzles with ideas and innovation creating new cultural engagements and experiences.

Dick Penny is Director of Bristol’s Watershed and Verity McIntosh is Producer at the Pervasive Media Studio.
www.watershed.co.uk
danceroom-spec.com

Stepping out of the silos