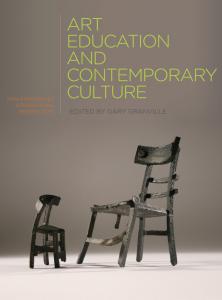 This book provides a fascinating selection of thought-provoking nuggets on formal and informal pedagogy in the arts and cultural sectors. As a socially engaged artist based in England, I found the essays on formal education in Ireland interesting, if a little dense in prose style at times. The second half of the book – which focuses on practice across informal settings and the tensions inherent in working as an artist, commissioner or curator in health, social and community fields – spoke about practical, theoretical and ethical issues that have been shadowing me for years.

Ailbhe Murphy’s rigorous look at the social, moral and aesthetic modes which create a landscape for collaborative practice is a compelling essay. It captures the difficulties for artists working collaboratively when their work clashes or just fails to find currency with the ideal of the autonomous artist – an ideal which dominates the reputational economy of the art world. Her discussion of the micropolitics involved in inter-agency and inter-institutional working is welcome, given the silent treatment which this subject usually receives in evaluative reports, which often focus on the change a project has effected in participants, but rarely in institutions.

John Mulloy’s exploration of art, community and the state highlights the tendency in much collaborative practice to emphasise distinctiveness in a participant group’s experience as opposed to the similarities with a target audience. More striking still is the timely discussion of the nature of state subsidy and contracting, which can render otherwise autonomous voluntary sector organisations dependent, disempowered and ultimately silent on the issues that they were created to shout about. It’s a matter which the emerging ‘payment by result’ methods of state funding are likely to exacerbate in an already heavily ideological funding framework.

Helen O’Donoghue’s look at the museum context for participatory and collaborative arts and curatorial practices is particularly apt when Arts Council England has just taken on responsibility for museums and libraries. O’Donoghue speaks compellingly about the locus of meaning and where that resides, with all its implications for museums’ pedagogy and interpretation practice.

Heavily rooted in the academic, but with plenty of practical examples, this is a compelling compendium of insights into contemporary arts education practice which – whilst written from an Irish perspective – has lots to offer to everyone working in the sector no matter where they’re based.
http://eff.org.uk

Eloise Malone is Director of Effervescent.