Andrew McIntyre outlines a new approach to exploring cultural engagement which provides an insight into people’s behaviour – and how to change it. 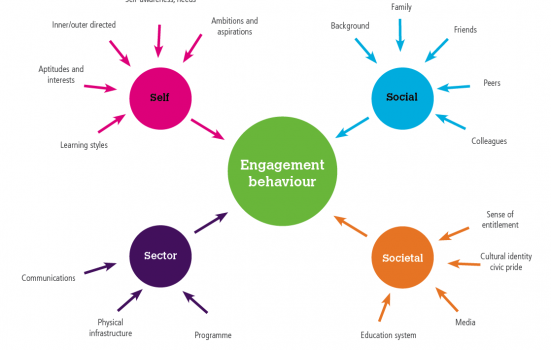 Audience development needs more than one dimension. Far too often we concentrate on breadth – just getting more people to attend – rather than depth – actually deepening people’s meaningful engagement with us and our art. Breadth counts heads. Depth cares what is going on inside those heads.

Focusing only on breadth is institutionalised. The government’s ‘Taking Part’ study effectively sets the measurement of breadth as a national lowest common denominator. Initiatives like Arts Council of England’s (ACE) ‘New Audiences’, the most expensive of its kind anywhere in the world, counted every single person who attended but did not require anyone to measure whether any of these people ever came back. ACE’s more recent and much criticised ‘A Night Less Ordinary’ campaign did not learn the lesson and was still too much audience and not enough development.

The measurement of depth has been left to individual arts organisations to have a go at on their own. In the performing arts, each venue and organisation might devise its own box office reports to track repeat attendance and some might even look at crossover between artforms and genres. In the visual arts, the measurement of depth is far more sophisticated with many museums and galleries now routinely tracking engagement with exhibits and visit outcomes.

If you are to build a relationship with each audience member, then understanding how you fit into her or his wider cultural life is a no-brainer

But all these intrepid arts organisations are hampered because they can only see what each audience member is doing in their own venue or with their own organisation. Their one-off visitor may actually be a cultural omnivore with a voracious appetite everywhere else while their repeat attender may never have been anywhere else.

Why does this matter? Well, for the individual arts organisation, the name of the game is now relationship management. If you are to build a relationship with each audience member, then understanding how you fit into her or his wider cultural life is a no-brainer. For the arts councils, the audience development agencies, the industry bodies and the local and national government policy-makers, having a standard, reliable and universal measure of the population’s depth of engagement with arts and culture is both a vital piece of intelligence and one of the few ways they could actually measure success. The lack of such a measure is one of the reasons they are all finding it hard to justify what they do and what they spend.

The Newcastle Gateshead Cultural Venues consortium (NGCV) challenged Morris Hargreaves McIntyre to explore, define and measure cultural engagement across the city. The obvious approach would have been behavioural – just measure crossover between venues and artforms. But this would have merely described what happens, not why it happens or how to change it. We wanted not only to define the levels of engagement but, crucially, the thresholds between them and to discover how to help audiences to cross these thresholds.

So we took a deeply psychographic approach. Intense, two-hour depth interviews explored people’s relationship with culture from their childhood and schooldays to their peer groups and parenthood. In all we probed 17 factors that shape engagement behaviour. We then sent participants off on attempts to cross thresholds and asked them to report back on their experiences. What emerged was a clear picture of six distinct levels of engagement and real insight into crossing the thresholds between them.

Mapped out side by side, levels of engagement represent a journey from ‘unengaged but interested’ potential attenders to those who are so familiar with the benefits of culture that they freely give their time and money to the arts.

Knowing what needs are being met, their attitudes to risk, their style of interaction and their relationship to culture, we can develop strategies to help audiences to cross the thresholds between the levels. By encouraging people along the ‘engagement journey’ we can grow audiences, increase visitor numbers and sales, and ultimately help to grow the supporter base of volunteers and donors.

New Zealand is the first country to officially adopt our levels of engagement as a national measure of success for audience development. It is particularly appropriate as the country enjoys an unprecedented 95 per cent breadth of engagement with culture (the UK is 85 per cent) but lacks depth of engagement. We are currently rolling out this international benchmark in the UK, Australia, New York, Brazil, Germany, Turkey and Israel.