Theresa Bergne considers the implications of national policy for public art at a local level, and describes the impact being felt in Bristol 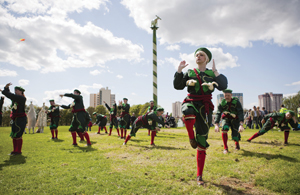 These are uncertain times for public arts funding via planning departments, thanks to recent changes by the Government. The National Planning Policy Framework (NPPF), published in March 2012, aims to make the planning system simpler and more accessible, but it’s hard to predict how it will affect the relationship between public art and the planning system. The new planning document states that the social role of the planning system should create “…a high quality built environment with accessible local services that reflect the community’s needs and support its health, social and cultural well-being”. These aims will be addressed by a new Community Infrastructure Levy that appears to be an additional means of leveraging financial support for strategic projects within a local authority, but this is unlikely to benefit public art in the same way as the two current funding routes of planning conditions and Section 106 agreements.

Nevertheless, with the Government’s localism agenda in mind, it’s interesting to note a new trend in decision-making on how public art money is devolved to local communities. In Bristol, it is the Neighbourhood Partnerships, set up by Bristol City Council in 2008, which are increasingly taking responsibility for this. Neighbourhood Partnerships bring together local councillors, community groups and residents to shape local services and schemes. The aim is to “bring public sector decision making to a local level where residents can influence how they would like to see their neighbourhood improve”. Decisions on when and where to spend council money are made by councillors but informed by residents.

Neighbourhood Partnership decision-making is highly dependent on the level of engagement in that particular community. In Hengrove, a small handful of committed residents attend all the Neighbourhood Partnership meetings but it’s not possible to judge how representative of their community they are. As the first programme of its kind where the funding is directly controlled by the local community, an evaluation is also being undertaken to track its processes and outcomes.

Another recent commission by Field Art Projects is ‘The Work as Movement Archive’, in Barton Hill, Bristol. Artist Serena Korda worked with Ashley, Easton & Lawrence Hill Neighbourhood Partnership to canvas local support and participation. £50m has been invested in the area in the past ten years, with a considerable amount of community consultation throughout this process. As a consequence, local residents are extremely engaged in their Neighbourhood Partnership and a broad cross-section of the community is represented at meetings.

Bristol has built up a series of exceptional public art projects over the past ten years, thanks to an active public art department within Bristol City Council and a rich infrastructure of curators and commissioning agencies. Local housing associations have supported a number of interesting commissions, including Hew Locke’s ‘Ruined’ (produced by Situations and supported by Knightstone Housing), Jeanne van Heeswijk’s engagement programme (EMP Projects, supported by West Street Developments) and Serena Korda’s ‘The Work as Movement Archive’ (commissioned by Sovereign).

Sovereign, one of the 20 largest social housing landlords in the UK, embarked on commissioning an artist in answer to a planning condition, but remarkably didn’t insist on the commission being a permanent piece of public art. Instead they took the refreshing step of working with Serena over 18 months to create a multi-disciplinary artwork that reflects Barton Hill’s industrial heritage and includes a film archive of people’s movements at work. This culminated in a procession, folk dance and choral performance in May. Serena will also produce a publication so that the performance can be recreated in the future.

Sovereign felt that it was important not to be restricted by a permanent public artwork. Lisa Denison, Sovereign’s Community Investment Director, explains: “We’re not just about bricks and mortar. When we build our housing, it’s also about the people who live in that community – we’re building new homes and shaping their lives.” They recognised the value of an artwork that, despite having no physical outcome, achieves a legacy for the area in the longer term through the connections it has made. Almost 200 people were directly involved in the development of the project, along with three local primary schools, and links have been forged between local organisations and the city’s cultural organisations.

The NPPF’s focus on “reflecting the community’s needs and cultural well-being” could signal a shift towards greater emphasis on local community involvement in delivering public art programmes in the future. But if experiences in Bristol are anything to go by, we need to be realistic about what community involvement can achieve, take the longer-term view when delivering projects, and continue to recognise the value of professional expertise.