£3m to engage older people in the arts

16 cultural organisations have been awarded funding by Arts Council England to create work for and with people over 75 years old. 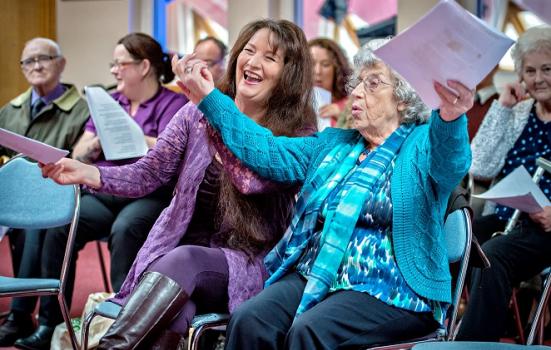 A new £3m fund that aims to increase older people’s engagement in the arts has been launched by Arts Council England (ACE) and the Baring Foundation.

16 projects with a cross-generational focus have been granted awards of up to £100k to champion social inclusion over the next three years.

“Being involved in arts and culture can play a big role in overcoming social isolation as well as increasing wellbeing for older people,” said Mags Patten, Executive Director of Communication and Public Policy at ACE.

“The projects funded through Celebrating Age place older people at the heart of the activity.”

The Celebrating Age fund is a direct response to the DCMS’s Taking Part survey, which found participation in arts and culture falls “dramatically” over the age of 75, and the fact over two million people in the age category live alone.

A Festival of Theatre and Dementia

One grant recipient, West Yorkshire Playhouse, has been awarded £99,950 to develop its dementia-friendly agenda with a Festival of Theatre and Dementia. People living with the condition will play “integral roles” in organising activities, including writing plays that will be performed at the venue and then toured to care homes.

“Through our ongoing creative programme with people living with dementia I have repeatedly been struck by the depth of their contributions which consistently influence and enrich the Playhouse’s creative programme,” said Nicky Taylor, Community Development Manager at West Yorkshire Playhouse.

“We anticipate that the Festival will bring opportunities for discussion and debate about dementia, to challenge stereotypes, and to provide a creative and fun opportunity for people with dementia to explore making and enjoying theatre.”

Another funding recipient, Rural Arts, will use its funding to develop a model of delivering arts and culture that could be embedded in clinical healthcare plans.

Wolverhampton Art Gallery will use its investment for a two-year programme with a local housing association, healthcare organisation and a local authority arts service.

Speaking about the new fund, Director at The Baring Foundation David Cutler said: “These new grants demonstrate the enormous appetite of arts organisations to work with older people’s organisations in new and exciting alliances.”

Celebrating Age will be open for a second round of applications later in 2017.

Correction 03/03/2017: The spelling of Mags Patten's name has been corrected.