Plea to save NI arts from urgent 'threats to very existence'

An anticipated £13m in Executive support may not be enough, as more than half the sector's jobs remain at risk. 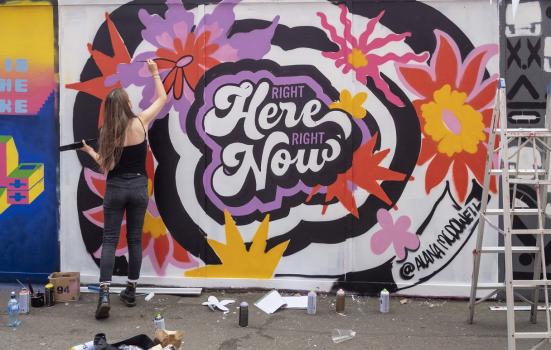 Northern Ireland's arts organisations need money now or the country "won't have a sector to return to".

Any further delays in delivering emergency funding will force mass redundancies, and up to 16,000 jobs - more than half the sector's workforce - remain at significant risk despite Covid-19 restrictions lessening.

Minister for Communities Deirdre Hargey has responded to the warnings from a recent taskforce with a pledge to take action.

A £5m programme for individual artists will offer grants of up to £2,000 before Christmas and the Executive has earmarked £13m to support the arts and cultural sector through 2021/22.

"Looking to the future, despite all of the formidable challenges presented by the pandemic, the Department [for Communities] is in no doubt that the resilience, creativity and vibrancy of the culture, arts and heritage sectors will prevail," Hargey said.

But the Culture, Arts and Heritage Recovery Taskforce forecast a darker future if at least £14m in emergency funding and other support isn't received soon.

Aid for Northern Ireland's arts has lagged behind that of the other UK nations. When it did arrive, it was too late and not fit for purpose, the taskforce noted.

"If there is a delay in disseminating [further] support many will be forced to lay off their staff and many revenue-dependent spaces like theatres will be in real peril of closing completely.

Recent reporting by ACNI found the country's arts workforce shrunk by a quarter amid collapsing income and ticket sales.

“Indeed, a diminished workforce was an issue of concern to the arts council pre-Covid, but has now become an area of strategic importance," McDonough said.

Attracting and retaining creative talent is of "critical significance" to the sector's survival, she added.

In March, 46% of arts workers remained on furlough - the highest of all sectors in Northern Ireland - and the taskforce feared organisations won't have the income to bring them back.

The Department for Communities (DfC) has begun exploring a tailored development programme for the sector, which it says could be introduced before April.

But Hargey was lukewarm on recommendations for a £2m commissioning fund, saying she accepted the idea "in principle" but wanted further detail on how it would work.

A £1m "welcome back" voucher scheme could help re-engage audiences who lost confidence in attending events.

A £145m 'Spend Local' scheme set up by the Executive has given people £100 to spend at establishments on their local high streets, including arts venues.

However, the deadline to use the pre-paid cards is December 14, meaning it provides little assurance to the sector in the long term.

The taskforce also recommended seizing on informal collaborations with councils' cultural officers during lockdown to establish a network of placemaking partnerships.

Armagh City, Banbridge and Craigavon's inclusion on the longlist for UK City of Culture 2025 is "the perfect example of how local government can indeed benefit from the strength of a rich arts and cultural offering," she added.