Free admission at DCMS-funded museums and galleries has helped boost visits by foreign tourists by almost 40% since 2008/9, while visits from within the UK have increased by just 3% during this same period. 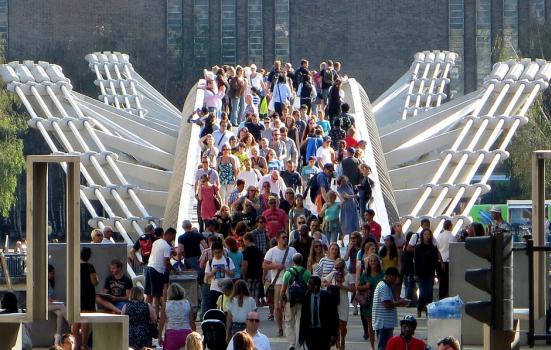 Tate has seen a decline in UK visitors while international visitor numbers have grown
Photo:

New figures published this week reveal that almost half the benefit of subsidised free admission to England’s DCMS direct-funded museums and galleries1 is now being enjoyed by visitors from abroad, who last year accounted for 43% of the 47 million visits to these institutions. With subsidy per visit currently averaging around £6.50, inbound tourism – especially to London – is now receiving a notional £130m-a-year boost from the culture budget. Half of all visitors to the Tate Gallery Group came from overseas, and the National Gallery (61%), the Royal Armouries (68%) and the British Museum (58%) attracted a higher proportion still. By contrast, those without a base in central London have served primarily UK visitors, with fewer than one in six visits to National Museums Liverpool (16%), the Geffrye Museum (14%) and the Horniman Museum (4%) being by overseas visitors.

In total, 2013/14 saw an all-time record number of visits to these museums and galleries, something Culture Secretary Sajid Javid has attributed in part to “the impact of the Government’s investment to guarantee free admission for the national collections”. He said: “These new figures highlight once again the public’s appetite for UK’s incredible culture and heritage, and the continuing appeal of our world-class museums and galleries.” But analysis shows that this investment is now being much more successful at attracting visits by foreign tourists than increasing the number of UK visitors. International visitor numbers have grown by almost 40%2 since 2008/9 when comparable records began, but visitor numbers from within the UK have increased by just 3% during this same period, while population growth has been over 4%.

Underlying this trend is significant variation between these museums and galleries. Tate, which comprises two London-based galleries plus regional galleries in Liverpool and St Ives, is the most visited of the 15, having attracted 7 million visitors in 2013/14. Overseas visitor numbers there fell by 135,000 last year, but UK visits fell by almost four times that number (576,000). At the National Gallery, total visitor traffic increased by over half a million (524,000) last year, but UK visits only accounted for 149,000 of these. Between them, Tate and the National Gallery now attract around 1.5 million fewer UK visitors than they did in 2008/9, while their combined overseas tourist numbers have grown by more than 2.5 million. National Museums Liverpool and Sir John Soane’s Museum also lost UK visitors during a period when their overseas visitor numbers have grown. By contrast, the Natural History Museum, the Geffrye Museum, the Horniman Museum, the Royal Museums Greenwich and the Wallace Collection have all seen more growth in UK visits than visits from foreign tourists.

Entrance fees to the permanent collections at England’s DCMS-funded museums and galleries were scrapped on 1 December 2001 as part of a government plan to widen access to the nation’s culture and heritage, though many still charge for special exhibitions. England’s museums and galleries are out of step with comparable institutions in other countries, where they succeed in attracting international visitors despite their entrance fees. The Louvre in Paris, which last month was named the world’s most popular museum and gallery for the second year running, welcomed 9.3 million visitors, an estimated 70% of whom were foreign visitors. This was despite an admission fee of €13.60: free access to all is only offered on the first Sunday of each month from October to March. At The Metropolitan Museum of Art in New York, adult admission is a recommended $25, which includes entry to its permanent collection and all special exhibitions. It has just fought off a legal challenge for its alleged attempts to make the fee appear mandatory. The 6.2 million visits to The Met in 2014 generated $38m in admission fees, while Tate’s 7 million visits generated just £6.9m admission fees and the National Gallery’s 5.9 million visits brought in £1.4m. In London itself, Westminster Abbey and St Pauls Cathedral each attracted more than 2 million visitors last year – 14% and 19% growth on the previous year respectively – despite adult entry fees of £20.

The financial justification for subsidising free admission is the value of the international tourism it generates. Last week Deidre Wells, Chief Executive of UKinbound, the trade association representing the interests of the UK's inbound tourism sector, told an oral evidence session at the ongoing Culture, Media and Sport Committee inquiry into Tourism: “Our free museums do huge amounts to mitigate this perception of [London] being an expensive destination.” But at the same session, London’s Deputy Mayor for Education and Culture, Munira Mirza, cast doubt over whether free admission really does encourage potential visitors to choose London over other destinations. She said that “many visitors are surprised” to find that entrance to the national museums and galleries is free, and continued: “Our research suggests that visitors are not as price-sensitive in that sense.” But she pointed out that the same may not be said of domestic visitors: “There is a question about general access for domestic visitors and whether they can afford to come to London, which is a valid point.”

Subsidised admission to DCMS-sponsored museums and galleries is a politically sensitive issue, not least at a time when public services are under threat from budget cuts. Subsidising free entry to stimulate mainly London-based international tourism is a policy which appears to be at odds with Tourism Minister Helen Grant’s stated long-term economic plan to use tourism to drive growth outside London – a plan which has led VisitBritain, the government-funded national tourism agency, to announce its intention to “focus on the rebalancing of this growing industry in 2015 to benefit the whole country”. At local government level, the UK’s largest cities are calling for a fairer share of government arts funding and devolution of cultural budgets to regional cultural capitals, warning that council funding cuts will force them to concentrate their own resources on statutory services.

Free entry at DCMS-funded institutions is thought to have a spill-over impact on other cultural organisations. In 2011, Labour MP Tristram Hunt raised concerns that regional museums were being unfairly treated compared with London at a time when “eye-watering cuts to local authority budgets mean that councils are either closing museums or ratcheting up charges”. British Destinations, the trade association representing the interests of England’s major tourism destinations, is now calling for something to be done to “address London’s free national museums competitive advantage (preferably widening it to other public and private attractions outside London, rather than removing it in London)”. Shortly after the introduction of free admission, a 2002/3 Select Committee inquiry into admission at the national museums and galleries reported: “While it is too soon to draw any firm conclusions, there is evidence to suggest that visitor numbers at some charging museums may have been adversely affected by the introduction of free entry at nearby national museums.” Eureka! The Museum for Children in Halifax in West Yorkshire, which shares a catchment area with the National Coal Mining Museum for England in Wakefield and the National Railway Museum in York, reported “a marked decline in visitor figures in 2001–02, with reduced numbers across all elements of their audience, including group bookings” when both its rivals dropped admission charges in December 2001.

1 Figures for Tyne & Wear Museums have been excluded as responsibility for their funding is being transferred to Arts Council England.
2 Trend analysis excludes the Imperial War Museum and the Royal Armouries due to inconsistencies in the raw data.