The Van Gogh Museum and Mauritshuis have said the decision to break with Shell was mutual, and sponsorship agreements that expired this summer would not be renewed. 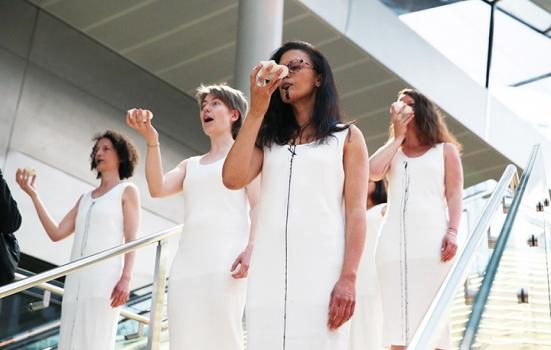 A Fossil Free Culture NL protest at the Van Gogh Museum in 2017
Photo:

News that three major museums in the Netherlands have severed their financial ties with oil giant Shell has been met with jubilation by anti-oil campaigners in the country.

Neither the Van Gogh museum nor Mauritshuis have renewed their ‘Partners in Science’ contracts with Shell, which had been in place for 18 years and six years respectively.

The news was welcomed by campaigners domestically and internationally, with UK-based art collective Art Not Oil telling AP: “As the movement calling for an end to oil sponsorship has grown, so has the list of cultural institutions refusing to legitimise the fossil fuel industry.”

The Van Gogh museum no longer lists Shell as one of its partners and has removed references to Shell and all articles about sponsorship from 2015.

The museum had worked with Shell since 2000 on a research project called ‘Partners in Science’, which provided both equipment and technical expertise to support accurate analyses of the composition of paints and primer.

Dismissing a suggestion the decision was made in response to a recent “art storm” of protests at the gallery, organised by campaign group Fossil Free Culture NL, a spokesperson told AP: “The partnership in science between Shell Technological Centre Amsterdam and the Van Gogh Museum, which started in 2000, came to a natural ending because the research around all paintings within the collection was finished”.

Mauritshuis, the museum that displays Vermeer’s Girl with a Pearl Earring, has also not renewed its ‘Partner in Science’ contract with Shell, which began in 2012. This is despite comments in its annual report last year that Shell was one of three companies that is “crucial for the long-term future of the museum”.

Explaining the decision, a spokesperson said the oil company had been crucial in that it had provided €3m for the renovation and restoration of a new exhibition wing, ‘The Royal Dutch Shell Wing’, which was completed in 2014 and remains an essential part of the museum’s offer. They confirmed that the gallery’s name would change after 2020 but stressed this was merely a reflection of the terms of the contract, rather than a response to anti-oil campaigns.

In addition, the Hague city council recently agreed to withdraw support for Shell’s ‘Generation Discover’ festival. It had provided the oil company with a €100k subsidy for the festival in 2016.

Politician Saskia Bruines explained the decision: “Coalition parties have recently agreed not to actively support the festival. The Board has therefore decided not to make a direct or indirect contribution to the Generation Discover Festival”.

The festival had also been supported by science and culture museum Museon, which no longer appears to be continuing the partnership. Museon did not respond to requests for comment.

Although all the cultural institutions stress the decisions about involvement with Shell are mutual, the announcements follow sustained protest by activists, in large part co-ordinated by Fossil Free Culture NL. The campaign group’s protests include placing dirty hands on the glass wall of the institution to “remind them that oil money stains our culture”, launching a manifesto and unveiling a 12-metre banner demanding to “End the fossil fuel age now”.

Responding to the news on Facebook, the group said it was “thrilled” to hear the institution had “chosen to distance themselves from the toxic influence of the fossil fuel industry”.

“This bold and historic move by the museum follows a series of protest actions by artists and activists aimed at eroding the fossil fuel industry’s image and license to operate.”

A spokesperson told AP that its work “is not yet done” but would not confirm whether  the group would be turning its attention to other Dutch cultural institutions connected to Shell, which include NEMO.

The developments follow repeated protest from climate scientists and campaigners about links between cultural institutions and oil companies in the UK. While Tate recently ended its 26-year relationship with BP, and Edinburgh International Festival did the same with its 34-year partnership, the oil giant has maintained high profile relationships with the British Museum, the National Portrait Gallery, the Royal Shakespeare Company and the Royal Opera House.

Commenting on the developments in the Netherlands, Jess Worth, Co-director of Culture Unstained, a member of the Art Not Oil coalition, told AP the Van Gogh Museum’s decision to drop Shell “is seismic.”

“But while many are closing their doors to Shell, the Museum of Science and Industry in Manchester has just welcomed the oil giant with open arms.”

She continued: “It’s astounding that a museum of science is so willing to help Shell look respectable.”