Letter: Brexit and me

Having to apply for a separate visa for each and every EU country would put paid to many international careers, including his, writes Paul Bogen.

Regarding your news item Time to prepare for “catastrophic” no-deal Brexit, warns CIF, you may be interested to hear how Brexit is affecting my situation and the company of which I am co-director and owner.

Due to Brexit I decided to leave the UK last year. As 95% of our work is for and with EU clients and projects, my co-director and I decided to establish our company Olivearte Limited in Ireland. This was partly because the other co-directors are Irish and Swedish. After also researching the options of Sweden and Malta, where I currently live on the island of Gozo, Ireland was the most practical and easiest location. Another reason for setting up the Irish company sooner rather than later was to remain eligible to apply for or be a partner in EU programmes. For most of these you have to have been established as a legal entity for at least two years.

Our UK limited company, established in 2008, is now only being used for one EU Creative Europe project of which we are partners. This ends in May next year. When all the reporting is completed we will be shutting the UK company down. As we are a for-profit company, we have been paying UK corporation tax, Employers’ National Insurance for staff, VAT and income tax on our directors’ fees and dividends for the past ten years. This will all now be going to Ireland. Although not a fortune, if many other companies are doing the same as us I wonder how much tax revenue will be lost to the treasury due to Brexit.

I still work for NIE Theatre in Cambridge, currently the lead partner of a three-year, Creative Europe project. This will end in 2020. If there is a no-deal Brexit, they have been informed they will probably not be able to continue as the lead partner for their project as of April of next year. And due to Brexit, many European organisations are now not asking or wanting to have UK partners in EU-funded projects they are planning or applying for. Why have the hassle and risk – and I don’t blame them.

All of my European friends and colleagues are dumbstruck at Brexit and keep on asking me why. Some keep on telling me it will not happen because nobody would be that stupid and self-destructive. But I then try to explain the island mentality of many ‘little’ Brits and the importance to them of Agincourt, the Spanish Armada, Trafalgar, Waterloo, Scott of the Antarctic, the charge of the Light Brigade and the Dunkirk spirit. 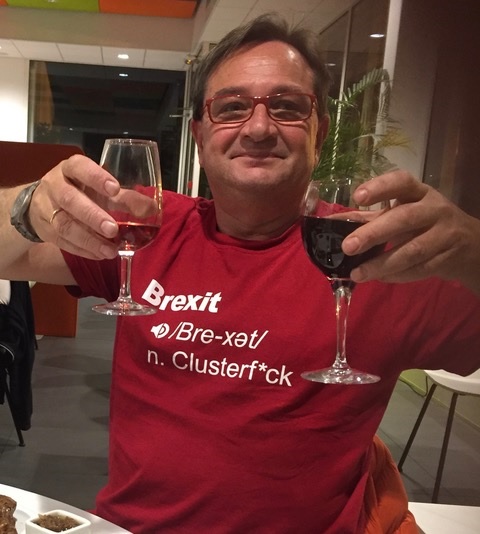 From a personal point of view, there are many Brits like me who work in or across the EU and whose careers are now at risk. Even under the Brexit withdrawal agreement (that has not as yet been agreed), although a Brit who is legally resident in an EU country as of 31 December 2020 will have the full rights to live and work there from 2021, they will not have the automatic right to live or work in any other EU country, as is currently the case.

If you take me as an example, I work in 10 to 15 EU countries each year for around 150 to 200 days. This work includes consultancy, training, project management, speaking at conferences and seminars, mentoring, research and fundraising. What is not known at present under a deal (or no deal) is whether I would still be able to do this without needing a work visa for each and every country. If yes (which I think would definitely be the case with a no deal and probably even with a deal), it would most likely be so complicated and costly that I would decide to stop doing this type of work altogether.

As I will be 60 in a few years’ time this is not such a disaster for me, but if I was in my thirties or forties it certainly would be. And there are many Brits in this situation whose careers are at risk in many different sectors. As my wife Mila is still a Polish citizen I am in the lucky position of having the option to apply for Polish citizenship if I wish to, and even if I do not, as her spouse I have the right to move to any other EU country (as long as I do not divorce her of course!) Our two daughters (27 and 25) are now obtaining Polish citizenship and are currently living and working in France and Portugal. Like many of their friends, who have also left the UK due to Brexit, they do not wish to return.

Actually, because of all of the above we are now considering moving to Portugal and will be going there for all of December for a research trip. This is because, if post-Brexit I cannot easily work across Europe as I do now, then we are thinking of setting up a new business project where people would come to us rather than me going to them. And it will be much easier, cheaper and more practical to do this in Portugal than in Gozo, where the corruption, prices, attitude and small size of the place has put us off even trying to do anything in this little EU tax haven. (You may have read that the prominent billionaire Brexit supporter, Christopher Chandler, purchased a Maltese passport this year, openly available here for €1m.)

Or I might just decide to semi-retire, do some voluntary work supporting young artists and organisations, buy a boat and pretend to be writing the proverbial book.