Theatre’s power lies in its people

For Liam Ford Evans, a career in theatre has highlighted what matters most: energy, experience and everyone else. 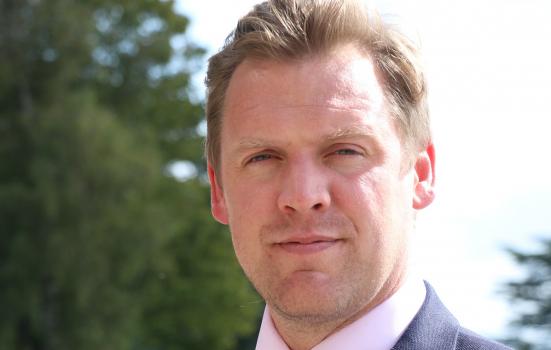 In 2016 I received a call – would I be interested in the newly created Executive Director position at Theatr Clwyd?

Yes. In the previous three years I had come to the realisation that I wanted to run a theatre building.

Although no… perhaps it was a little early in my career?

Tamara, the Artistic Director, was someone I’d previously worked with, liked, and respected. She had convinced the Board to create a co-CEO position to help shape a vital future for the venue and company, which was formed in the 70’s. As an exec, it is interesting to learn where your time is needed and best spent. I get to do – and worry about – a little bit of everything, from local and national politics, through to finances, company welfare, marketing, and, of course, toilets.

We’re making some bold new work, balancing populism with breadth of appeal. We’re re-modelling our governance, riding the tsunami of a pandemic, placing our community’s health and wellbeing at the centre of our work, and delivering a £40m capital project. We had even increased our annual turnover by £2m pre-pandemic, but the main thing is that we look out for each other, laugh, and enjoy what we do as a team.

I am directly involved in and responsible for shaping the future of a major arts organisation – is it what I thought it would be? I’m not sure. It is, however, a privilege.

This is my journey to get here.

On the ground (and in the meeting room)

I came from York Theatre Royal, where had I worked as Associate Producer for a year. Prior to that, I was the theatre’s Capital Development Associate. We had an ambitious plan to deliver ‘business continuity’ during a period of major capital redevelopment. The Chief Executive and Artistic Director were either overseeing the development or the productions, so I was left to lead a 1000 seat temporary traverse theatre at the National Railway Museum (It had a railway track running down the middle!). The partnership with the Science Museum Group run venue was complicated – major partnership work always is – but we worked together on several major productions, one of which was filmed for cinema release.

It was a huge undertaking, and everyone was stretched way beyond their limits, but I have extraordinary memories of it. It was the last role I had where I needed to be ‘on the ground’ as well as in the meeting room. I miss the energy of such a position.

Sheffield Theatres needed someone to deliver organisational change, oversee all their produced work, and take on the line management of their production teams in 2014. While I had been involved in manging large-scale productions, this was my first experience of senior level line management within a major producing theatre. For the first time I was working with major commercial producers, and on large scale musicals. It really did offer me the experience I needed for the current role at Theatr Clwyd.

This was the role when I started to understand what kind of leader I wanted to be, and how to deal with the difficult things you inevitably encounter as a senior manager.

When Alan Lane of Slung Low approached me in 2014 about acting in his new adaptation of Moby Dick, I had not been on stage for five years. It involved floating stages, whale hunting, sinking oil rigs (all of which were brilliantly realised). As a freelancer with no major producing commitments in the pipeline, how could I say no? I then got offered a job at the Stephen Joseph Theatre in a comedy thriller. It meant there was a perfect gap for me to act in the tenth anniversary production for Sprite Productions.

This little sabbatical was a joy – but I do remember realising how self-aware acting can make you. How do I feel today? How do I look? How is my voice? I missed looking after everyone else rather than just myself.

By this time, I had developed a specific and uncommon set of skills. Pilot Theatre agreed to work with Slung Low to produce a new piece focusing on the York chocolate industry that progressed work I’d done previously with the community.

The end product was, quite honestly, beyond our resources, but it was incredible. A company of over 300, a mile-and-a-half stage through the streets of York, major projection mapping on buildings, zeppelins leading the audience routes, traffic management and road closures, articulated lorries that exploded, and an audience of over 300 for every performance. I have never been so exhausted – Alan Lane started buying us military grade caffeine supplements!

The York Mystery Plays might be the defining moment of my career. I was tasked with delivering the community involvement in the first restaging of the York Mystery Cycle in a millennium.

My growth came from understanding community involvement with professional theatre. We had 1700 volunteers, two casts of more than 300, and a choir of over 200. But beyond the numbers it was the people, with all their specific needs, that changed my perspective on what theatre can and should do for communities. We had 90-year-olds working alongside 6-year-olds, chief executives working alongside the unemployed. We supported people with disabilities and drug and alcohol addictions to be involved. For the first time I realised that while I love making theatre, what I really believed in was the power of theatre to bring people together, make a difference to their lives, and help them in ways no other art form can. I will never experience anything quite like this project – it harnessed the best in people as they came together to achieve something extraordinary.

I was the first producer for The Factory Theatre in London, not long after being part of the original acting company. Our first production was Hamlet. The audience decided which actor played which character via rock paper scissors. It might sound horrific to some, but I have never seen live theatrical storytelling so electric as during this process.

We opened to 30 family and friends at the old Southwark Playhouse; a year later we sold out a midnight matinee at The Globe. We played music festivals and underground tunnels. We travelled across the UK and Europe (we nearly got to Broadway but the 2008 economic crash blew our investment). It was an absolute whirlwind – the closest I’ll ever come to feeling like a rock star. It was the early days of social media and we had bigger followings than the RSC or Royal Court. It was then I realised that leadership and friendship were not always as compatible as I had once thought.

Hester, my then-girlfriend and now wife, and I started our own production company doing summer seasons in and around the grounds of north Yorkshire’s Ripley Castle in 2004. We had the most glorious time with Sprite Productions, making beautiful theatre, hosting visiting productions, and employing talented theatre makers. This is where I learnt the producing ropes as well as how to run a business.

Actor (and loads of other stuff)

Which takes me all the way back to my graduate days! After leaving Bristol Old Vic with a full bursary from my local council (the last year they were available), I enjoyed a good run as an actor, alongside plenty of bar work during the early years.

I was fortunate enough to play a lead at the RSC and in the West End, I toured the UK, travelled the world, learned filming techniques on adverts and then some great (and not so great) TV shows and films. It was joyous – or at least it was when I was working.

Even at drama school I had started producing. While working as a professional I soon realised that most actors get told if they have an agent, told if they have an audition, and told if they’ve got the job. When you get the job, you are then told what to say, how to say it, what the costume is, what set you are playing on. This isn’t always the case. I wanted more of a say – hence everything that came after.

Liam Evans Ford is the Executive Director of Theatr Clwyd