Eleanor Lang tells us about the twists and turns that have led her to become the new Executive Director of Cheek by Jowl. 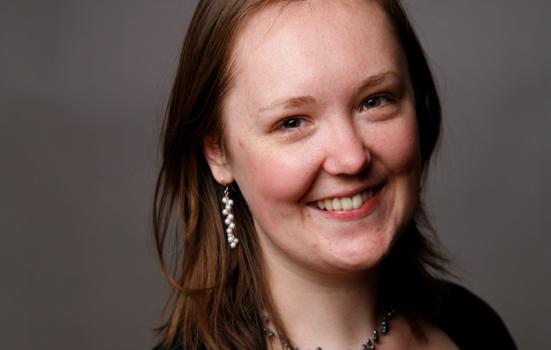 I’m six weeks into my job at Cheek by Jowl, and adapting back to work with touring productions. Conversations have changed from being about the building plumbing to being about freight timings.

I’ve loved Cheek by Jowl’s work for a long time, so it’s felt like a real privilege to join the company. After my time at Free Word, I was also keen to remain working with an international focus.

I’ve been getting to know our two current productions and their companies – The Winter’s Tale in English and Measure for Measure in Russian – so I’ve spent quite a lot of time visiting the company on tour. I’m adapting to working on my laptop wherever I am – at the back of the theatre, on a train or in an airport lounge.

It’s lovely to be working with a small team again, it feels like we can accomplish lots of things, but remain flexible and light on our feet.

I’m a board member of Tonic Theatre, which works towards gender equality in the arts. Although at times it feels like there is a good gender mix in the arts – the balance in different roles is really different, with far more men in senior positions, and far more main parts for male actors. There is also a lack of parts for girls in school plays, which is why last year we published three new plays for schools, with more and better female parts in them.

Being a board member is really important for me. It gives me new perspectives on things and gives me a wider focus in my work. It’s also interesting to have a role where I’m not involved in the detail – it’s all about the long term and the strategy.

My role at Free Word was a really big change and challenge for me. Not only was it my first Executive Director role, but it was a whole new sector of the industry. I remember in my first two weeks trying to get my head around all the new acronyms.

Free Word is an international centre for literature, literacy and free expression, based in central London. It runs a programme of events, and houses another six organisations all working in the same area. All our artistic work was based on collaboration – working locally, nationally and internationally.

It was a huge learning curve. Within six months of starting, I had taken on a capital project and over the four years I was there, the organisation grew and developed substantially. Alongside that, I undertook my first EU-funded project, working internationally with four other partners. I was very lucky to work with Rose Fenton, the Director, who taught me huge amounts about working collaboratively and internationally (which is standing me in good stead now).

It was a really mixed job, which I loved. My job was essentially to make sure all the nuts and bolts were in place, but because it was a relatively small team I worked on some of the artistic programmes as well. My tasks ranged from looking at what we could do with the building and the challenges that come with running a public space, to working with the local Islington Word Festival and producing an annual gathering for 250 translators to talk about the technicalities of translating foreign fiction.

I joined the Bush as their General Manager for a year. It was a new role, created as they up-scaled from being a small theatre above a pub, to their new premise in the old library in Shepherd’s Bush.

It was a busy time, not least because the opening show was ‘Sixty-Six Books’, which involved sixty-six writers writing sixty-six plays with over 100 actors taking part over three weeks, including two 24-hour cycles of all the plays and a twelve-hour performance overnight in Westminster Abbey.

Much of my job was looking at staffing, finances and structures as we moved from the old building to the new building. It was a real ‘detail’ job – I learnt a lot about contracts and negotiation, and how all aspects of an organisation are interrelated.

The Bush also had a brilliant team ethic. It was a place where everyone really pitched in, meaning you could sometimes find yourself wielding a paint brush or a hoover.

Y Touring (now Theatre of Debate) was my first management job, and a big step change for me.

Y Touring toured new writing, usually about social or ethical dilemmas, predominately into secondary schools. Not only did I learn a lot about the practicalities of touring, but it was the first job where I really had to think about money and fundraising. We had to raise all the money for our productions, as we didn’t get any funding from Arts Council England.

Because we mostly toured to schools, I also learnt a lot about the interaction between arts organisations and the education sector. Working closely with schools presented quite a challenge – they often had increasingly inflexible timetables and we had to find ways to adapt to fit them.

While I was at Y Touring, I also had the opportunity to do a two-month secondment to Battersea Arts Centre, helping to produce a festival. This gave me a great opportunity to learn how a much bigger arts organisation worked, as well as giving me insight into festival producing.

Eleanor Lang is Executive Director of Cheek by Jowl.
www.cheekbyjowl.com