When music is no longer the afterthought

For many years ‘music for theatre’ wasn’t even recognised in the Olivier or Evening Standard awards, but the tide is turning. Paul Clark sees the increasing confidence and ambition of sound and music, even in ‘well-made plays’. 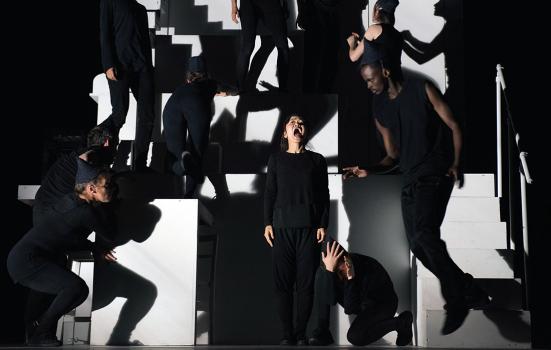 I write music for stage productions, mainly with Clod Ensemble, the company I started with director Suzy Willson, where both music and movement are at the heart of each piece. I also collaborate with other directors and organisations in opera, theatre and live art at many different scales from fringe productions to large scale international work.

Back in the 1990’s when I started, there were three main professional gigs for a composer in the UK:

When I say non-category, I mean it literally. Industry awards are sometimes a useful barometer and for years there was no music category in the Olivier or Evening Standard awards, as there was for design, lighting or costume or sound design.

Moving up the agenda

British theatre has a long tradition of text based ‘well made plays’ and understandably music is not always top of the director’s or audience’s agenda. But despite – or perhaps because of – the lack of consensus around what a theatre score is or could be, musicians and sound designers have, especially lately, been busy making productions with music central to the aesthetic of the piece.

I have made dozens of pieces with Clod Ensemble which are definitely not a musical, an opera or a play, but which have a musical score at their heart. Under Glass (2007-2017), for example, was a promenade surround-sound installation with dozens of speakers spinning the score throughout the space, and all the lighting changes digitally choreographed to the music. In On The High Road (2019), eight dancers, one actor and three singers share the stage, to an electro-acoustic soundscore.

Hybridised forms like these are flourishing and it is now increasingly likely that you will find a musician or sound designer present throughout a rehearsal process – something which was rare to see ten years ago. A lot of it is to do with the music creation and playback technology. With the miracles of a humble laptop, I can now achieve in a lunchbreak what might have taken me several days only a couple of decades ago.

Crucially, this speed gives a musician or sound designer the opportunity to quickly experiment and make propositions early in a rehearsal process. Younger directors are used to asking for something ambitious, which they can immediately try out in the rehearsal room and embed it into the bones of the production. This is leading to the music-infused forms we see now, especially on the fringe, where theatre, music and perhaps dance exist on stage together and one is not simply in service to the other.

There are hundreds of examples to be found across and between the different performance silos. Heiner Goebbels is an obvious example of someone making theatrical experiences rooted in sound and music. In a piece like Stifter’s Dinge, an installation with multiple-player pianos, he managed to create something that felt theatrical without having any (human) performers in it. The tradition of music being embedded into a theatrical experience is stronger in continental Europe, especially in Germany, where there is little adherence to the naturalistic aesthetic still prevalent in the UK: the music can serve whatever purpose suits the show.

And it is in the world beyond the ‘well-made play’ that most of the action is. Here in the UK many performers who wouldn’t have originally considered themselves composers are writing their own scores. Artists such as Melanie Wilson, who began as a theatre performer, are writing pieces that feel like operas. Bourgeois and Maurice, a duo with their roots in cabaret and drag, are now writing musicals.  Younger performers such as Figs in Wigs and Rachael Young are weaving experimental sound art into their performances. Some of Hofesh Schechter’s performances are as much a gig as a dance performance. ‘Gig Theatre’ has become a sub-genre of its own, with bands like Klanghaus, classical music ensembles such as Manchester Collective and artists like David Byrne or FKA Twigs all reaching into the theatrical toolkit to re-imagine concert experiences.

Beyond the ‘experimental’ world you can see the increasing confidence and ambition of sound and music, even in ‘well-made plays’.  Certainly, when I wrote music for Katie Mitchell’s Cleansed at the National Theatre there were detailed musical sequences and a continuous underscore for what was essentially a classic play. This didn’t feel radical. It was just what the production needed and we were given the time and budget to deliver it.

Music seems no longer to be an afterthought, or emotional wallpaper, but a celebrated, vibrant, central and serious element of our performance language which can push theatre and live arts in interesting directions to create something new.

Paul Clark is a composer and co-founder of Clod Ensemble

When music is no longer the afterthought
Extravagant acts