Angus MacKechnie explores our complicated relationship with cultural buildings. Is it time for a change of attitude? 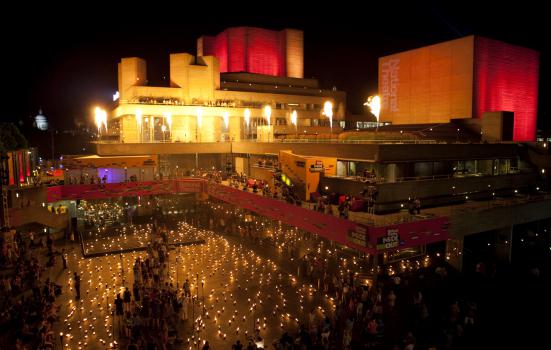 'Concrete Inferno' by The World Famous at the National Theatre's Watch This Space Festival, 2012
Photo:

It feels like there’s a big downer on cultural buildings. The notion of constructing something for culture that has walls and doors and requires people to cross a threshold, is deeply unfashionable. Big capital projects, once a mainstay of British cultural development and the backbone of the national arts infrastructure, are no longer seen as the core element they once were.

This seems to hold particularly true of buildings for the performing arts. With museums and galleries there is an acceptance that oil paintings, dinosaur bones and royal jewels need a roof to offer protection. But where there is a live interaction between audience and artist, where there is participatory involvement and where work is striving to be as accessible as possible, there is more ambiguity about the value, appeal or even necessity of a dedicated building.

In the UK our slightly bumpy relationship with cultural buildings is due in part to an over-enthusiastic building programme in the past. After the Second World War and the formation of the Arts Council, there was an extensive construction programme to place theatres in towns and cities across the country.

This reached its height in the 1960s, but the times when a medium-sized town could support a full-time repertory company to fill its stages have long since passed, and the audiences that were once happy to flock to an un-starry, local production have virtually disappeared.

So in 2015 we can go to Leatherhead and Farnham to find abandoned theatres named after actors who inspired them to be built: Thorndike and Redgrave, ghostly names, fast being forgotten.

The 1970s saw the rise of the multi-disciplinary arts centre, responding rather bluntly to the shifting demands of the audience. More catholic tastes, international influences and new moves towards wider participation meant that buildings needed different facilities and a different relationship with their audiences.

The arrival of a culturally indifferent government under Margaret Thatcher meant that many of these relatively new buildings found themselves without the financial support to keep them filled with any culture at all. At this point, the arts sector had little entrepreneurial experience to move ahead in such altered economic times. The virtually non-existent role of the professional arts fundraiser suddenly became central to any cultural institution that wanted to survive.

The bigger building-based organisations began snapping up the available private and corporate support. Rooms in galleries rapidly began to acquire names of their philanthropic supporters and anti-establishment playwrights found their productions being underwritten by banks and insurance companies.

Most of this wasn’t new. The idea of cultural patronage is a long tradition. For centuries individuals have chosen to give their cash and lend their names to artistic endeavour. Elizabethan gentry supported the dubious world of plays and players, the Victorian magnates of the industrial revolution began building museums and galleries for the edification of the populace. So easily do we refer to the Tate as a cultural institution that we forget it bears the same name as our sugar.

But philanthropic money loves a building. It loves something solid that you can engrave on. It loves a plaque, a name above the door, a legacy. So if we’ve now built enough buildings, we need new ways to convince our supporters to continue to part with their cash. Existing institutions can be renamed, previously unadorned rooms, terraces, corridors, seats, walls or paving slabs can be transformed into sponsorship opportunities. But such ongoing investment seems to fly in the face of how we really feel about buildings.

The brilliant Welsh and Scottish redefinitions of what a national theatre can be (without being a physical theatre) have led to some radical debate about just how necessary a building is to a major cultural organisation. Being fleet of foot and without geographical constraint has clearly allowed these two companies to stretch out and embrace new audiences and new theatrical forms, both essential if our cultural landscape is to grow and thrive.

The building becomes the focus

Here I have to remind myself that I spent more than 30 years working at the National Theatre in London, a major cultural organisation which is largely defined as a very solid, very recognisable, very concrete building. I remember visiting shortly after it opened, with its posters confidently announcing ‘The New National Theatre is Yours’. It’s a building that was boldly designed with radical ideas to make it open, welcoming, egalitarian and inclusive. As a child, it seemed like a vast playground, full of places to hide, staircases stretching in all directions and carpets to roll around on.

I liked its brutalist simplicity, which saved all the colour and light for the stage. I liked the way the terraces provided better views higher up where you paid less for your ticket. I liked the way the architecture encouraged the unfussy, casually dressed audience to lounge around on the floor. On the stages, the work was inspiring and modern, attracting criminal prosecution for indecency and brazenly attacking the establishment.

To my eyes, it was the opposite of those tired repertory theatres with their be-suited spectators watching dusty productions of pallid plays. But I was aware that my perception of the National Theatre wasn’t everybody’s. It was described as intimidating, unwelcoming, cool and unfriendly, the opposite of everything it intended it to be.

And herein seems to be the problem. As soon as the building goes up, it is the building that becomes the focus. It seems that a building can turn a good idea into a hostile institution.

There are reasons for buildings. On a very basic level, culture still needs offices, workshops, rehearsal rooms and laboratories. But more interestingly, people visit institutions with the spirit of a religious pilgrimage. They literally travel across the globe to walk into Shakespeare’s Globe.

Entering the doors of a major gallery, there is often a breathtaking sense of scale and awe; children marvel and gasp at that sense of occasion and magnitude. But it is near impossible to ensure that every child has that experience and if they do, to make sure that it isn’t just a one-off.

For a long time, my work at the National Theatre focused on audience engagement, which was largely about unearthing the new audience. I used to find this a difficult brief, as a new audience is such a fluid quantity, lending itself to so many definitions. For someone who was happy working within a building, it is somewhat ironic that for ten years I was programming the work that went on outside. But that is where I found I was engaging with that elusive new audience, and without a doorway to enter or a ticket to buy, I was constantly thrilled by the endless diversity.

My personal mantra was that we demanded nothing in return. If they happened to buy a coffee or a beer or even a ticket, this was a bonus but not a requirement. I wanted to make sure I stayed true to the early principle that the National Theatre is yours, whoever you are. In lean economic times, I watched people working out how to have very cheap, very full summers, sitting outside watching a show before packing the kids up and dashing off to the next free event somewhere else – often looking exhausted from taking in too much free culture.

Having work that literally burst out through the doors and on to the street felt like a perfect illustration of the outward-looking intention of a building that might be perceived as formidable. If we are coming out to you, hopefully you’ll feel you can come in to us. I used to enjoy being gently subversive with the famous brutalist architecture, finding shows and installations that played with the building itself.

I worked with artists who covered the concrete in wet laundry or draped knitting from the top of the building or appeared to set the whole place alight with thousands of candles. I worked with video artists to project rave music mixes on the walls, showed a 12-hour Andy Warhol film in its entirety on the side of the building and placed 20 jugglers over all the terraces, sending a cascade of balls from the topmost point of the building down to the riverside.

These were playful ways of redefining a well-known building and giving it a different, unexpected identity, a form of temporary architectural realignment. But it was my love of the building that allowed me to play with it so freely, and I wanted to be sure that it was sending out the signal that this was not an unapproachable cultural megalith. If we are to keep our cultural buildings, this has to be the message we send out in order to justify them, to open up and develop the work they do, and to secure the diversity of our cultural future.

The Clore Leadership Programme is a not-for-profit initiative, aimed at developing and strengthening leadership potential across the cultural and creative sectors, particularly in the UK. It awards its flagship Clore Fellowships on an annual basis to exceptional individuals drawn from across the UK and beyond, and runs a choice of programmes tailored to the leadership needs of arts and culture professionals at different stages of their career. This provocation paper has been produced under the aegis of the Clore Leadership Programme. Click here for the complete version of this paper.

Artists on the front line
Walls, doors and thresholds

On the high and low roads