The gender divide amongst artists exhibited and sold is not inevitable, and new research into Artfinder’s online community proves it, says Jonas Almgren. 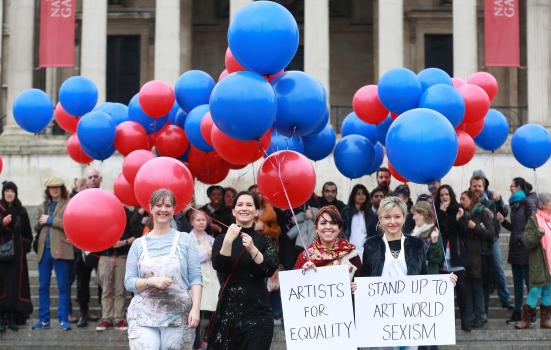 Earlier this year, Artfinder published a gender equality report. It was an investigation into the differences in gender representation between the high-end art world and our own marketplace, where the gender balance of artists is 48% men and 52% women. Artfinder is a community of 10,000 independent artists all over the world. We have 350,000 pieces for sale on the site and have known for a long time that our artists have pretty much a 50/50 gender balance. What we didn’t realise was just how bad things are in the high end.

From 2011 to 2016, just two in 100 of the top lots sold by living artists at auction were works by women. Of 2,300 artworks in the National Gallery, only 20 are by women, and none of the top ten richest living artists in the world are women.

Artfinder’s own almost 50/50 gender balance isn’t something we did consciously, which in many ways is why we feel it’s so important to talk about it

In the UK, Whitechapel Gallery does about the best, with 40% of its solo exhibitions being by women, followed by Tate Modern at 25%. In the US, the female representation for solo exhibition figures are around 20% for MoMA, The Whitney and The Guggenheim in New York and LACMA in Los Angeles. Permanent collection figures are even worse, with just 7% of the work at MoMA being by women in 2015, up from 4% in 2004.

A primary cause for this unbalance is the burden of history. Much of the art shown in galleries and museums is by artists who are long dead, and the product of a world unrecognisable from our own in so many ways, not just the inequality of opportunities for men and women.

Control of the art market

But something is changing and there is a clear reluctance in the high end to acknowledge that. In 2015 German painter Georg Baselitz told The Guardian: “The market doesn’t lie. Even though the painting classes in art academies are more than 90% made up by women, it’s a fact that very few of them succeed. If women are ambitious enough to succeed, they can do so... But up until now, they have failed to prove that they want to.”

This statement from Baselitz is seriously misleading. It is a fact that very few women succeed at the high end, but is it a fact that the art market doesn’t lie? A market shaped by a small number of global gatekeepers is always going to reflect the beliefs and assumptions and best judgement of those running it – historically dominated by men – and one in which women are still playing catch-up.

The art market might not lie explicitly, but that doesn’t mean that it fairly reflects the talents and quality of work being produced by all artists, or offers an equal start line from which all artists have the same opportunity.

Artfinder’s own almost 50/50 gender balance isn’t something we did consciously, which in many ways is why we feel it’s so important to talk about it. Had we spent years carefully crafting a gender equal marketplace, that would in some ways invalidate our message, because just like the high end we would have built a world in our own image. But we didn’t do that.

Instead, we created a democratic and open marketplace. And it just so happens that when you remove those gatekeepers and offer entry and opportunity to everyone equally, around 50% of artists in the market are women. In our case, those women sell more work, sell it faster and sell it for a greater total value than men.

Women sell nearly 40% more art, and of our top ten best-selling artists of all time six are women and four are men. This seems to be proof that female artists are out there, that they want to sell themselves and that they are doing just that.

Interestingly though, although women’s work sells for a greater total value, their price per artwork is around £100 lower than men’s. Does that mean our women are underselling themselves? Or that in a world where they have complete control over their pricing and how they sell themselves, that they are more realistic or more savvy?

We hope it’s the latter but it’s very hard to tell. When we told our women about these numbers, most were surprised by the price difference – and maybe it has encouraged a few of them to increase their prices.

The big question is whether the changes we are seeing will filter through into the wider art world. It’s a difficult question to answer because of the lack of reliable data, and there is no definitive study on gender representation in the world’s museums and galleries.

Curator and writer Maura Reilly collects figures by visiting galleries and museums and physically counting how many works are by women and how many by men. That’s something that all of us can do and part of our campaign is encouraging people to go out to their local institution and count how many of the works are by male and female artists and tweet using the hashtag

It’s an issue that won’t be solved overnight, but the only way to make inroads is to keep talking about it.