Taking art out of the box

Biennials have emerged as a key influence in contemporary exhibition-making. Shwetal Patel and Sunil Manghani explain how a more informal approach to art opens up new experiences and audiences. 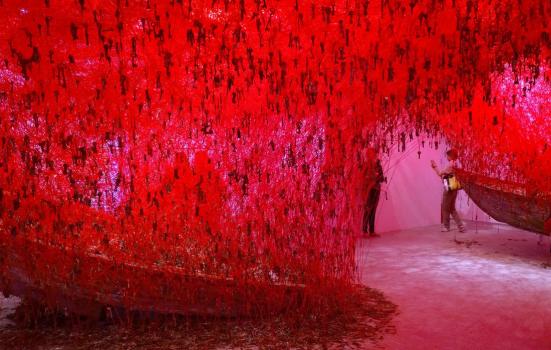 The Japan Pavilion at the Biennale di Venezia

Why make art eventful? Isn’t it enough to go to your local art gallery or simply look at artworks via an app? The answer is, quite simply, no. Art and creativity are uniquely bound up with what it means to be human. We make things, we share things, we reflect on things. And we make things again. Art is always eventful, always moving. Yet perhaps we are too adept at placing art in a box, including placing it (and cataloguing it) in museums.

The many and wonderful galleries and museums at our disposal around the world give access to all sorts of artworks, histories and archives. Rooted in the practices of the Enlightenment, which spurred not only our thirst for knowledge, but also the methods for unlocking, maintaining and regulating it, the collections of today’s museums offer a vital resource, helping us to relate to cultures, ideas and history, to maintain our cultural heritage, and simply to take pleasure and inspiration.

Museums and galleries have come to be seen as important institutions within the broader fabric of our public sphere - sites where we can think freely, exchange ideas, and raise questions and issues. Yet, equally, it has long been known that the art world can be elitist, exclusionary, and difficult to understand.

If museum and gallery exhibitions have for the past century been the medium through which we access and receive art, then today it is perhaps the biennial exhibition that is the medium through which new forms of art and artistic practice are introduced. Crucially, biennials (which also go by the Italian word ‘biennale’) have become an important device for taking art out of the box, placing it in new contexts and reaching new audiences.

A shift to biennials

The shift in influence from museum to biennial developed slowly in post-war Europe, and was shortly followed by a second wave of biennials outside the continent, notably with the advent of the São Paulo Biennial (founded in 1951). During this period of economic growth and globalisation, certainly through to the 1960s, artists were primarily shown in museums and galleries. Works were created in the knowledge that they would be displayed, consumed, and contextualised in such institutional spaces.

Yet, in parallel to this growing institutionalism of modern art, the avant-garde were becoming restless within the confines of the museum space, and began to break away from ‘the static atmosphere of the museum’ by organising their own ‘happenings and concerns’.

Today, biennials have arguably emerged as one of the key markers and drivers of contemporary exhibition-making. They open up not only new audiences for contemporary visual art, but also the very conditions in which we come to view art - although it can equally be be said that they sometimes fall into the trap of the few setting trends and tastes for the many.

Speaking in 1971, Harold Szeeman, one of the first self-declared independent curators, observed that artists were working with a new purpose, principally engaging with social and political concerns. He stated (somewhat prophetically at the time) that "artists are no longer interested in getting into the museum, but want to conduct their activities on a wider stage, for example the municipality".

Today, with well over a hundred biennials taking place across the world in any given year, we have become ever more familiar with this format. Australian art historian Chris McAuliffe alludes to the emotive powers of the biennial format: “Because each biennale is a brief, one-off event (usually of about 12 week’s duration), visitation is driven by an intensive promotional ‘call to action’. Increasingly, marketing strategies focus on emotive effects, emphasising the biennale as an ‘experience’ rather than as a formal cultural affair.”

Canny organisers amplify these emotional effects with unusual venues (abandoned factories are a favourite), hands-on and interactive artworks, and the placement of striking sculptures or installations in familiar public spaces.

Of course, not all biennials need to be large in scale or follow these now well-trodden tropes. Not all need even to be described as or called biennials. But what we should keep in mind is that art can always be innovative, experimental, and eventful. Whether we crave spectacle or political action (or both), art can still move us, if we are willing to be moved by it - and it can redefine what we can do and be in the process.

Shwetal Patel is a researcher and Sunil Manghani is Professor of Theory, Practice & Critique and Director of Doctoral Research, both at the Winchester School of Art, University of Southampton.

This article is an adapted extract from ‘How to Biennale? The Manual’, a practical guide to making your own art events, written by Shwetal Patel, Sunil Manghani and Robert E. D’Souza.

Taking art out of the box