Settling scores, creating stories and taking risks - Gary Lagden saw many parallels between the worlds of theatre and rugby. But would these communities themselves agree? 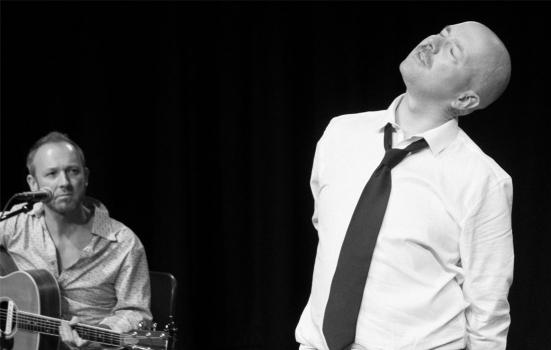 I was born and bred in Port Talbot and trained as an actor at RADA. Since graduating I have worked in community and inclusive theatre and recently wrote my first play, Fly Half. It’s about the trials and tribulations of a rugby player from industrial south Wales, as well as the characters that surround his home town team.

The play was first performed in Aberavon Rugby Club's bar in Port Talbot in the autumn of 2017. Afterwards, an 81-year-old ex-steel worker, rugby player and self-proclaimed non-theatre goer, said: “I looked around at big beefy guys with all tears in their eyes, and I was one. If you look around at this small rugby club of ours, you will see faces of astonishment. None of us expected to see so much passion.”

It has been vital to the performances we’ve done in rugby clubs to get the support of the chairperson and staff of the club. We’ve had fliers and beer mats made displaying all the key information. Local press helped, as did the usual social media outlets, but it was actually turning up and meeting the staff beforehand that ensured an audience and reassured the committees that the performance would relate to their members and be of a high standard. We wanted to tell a good story and be present in the hallowed rooms.

As for whether it will encourage rugby fans to go the theatre elsewhere, Hugh, originally from Merthyr, travelled from Nottingham to Leicester to see Fly Half and brought friends. He said it was the first play he had seen in 15 years. I also know the clubs want the play back and are open to the idea of other shows in their venue, which I think is a win whichever way we look at it.

The main aim of the play was to create a quality piece of theatre that could explore the connections between the experiences of regular rugby fans and storytelling theatre. Director Geoff Bullen and I have always thought that there is an invisible but strong bond between rugby and narrative. The ups and downs of a match seem to relate so well with the personal stories of the individuals in the crowd.

In Wales, rugby union has a working-class heritage. It was a way of expressing yourself after a hard week down the pit or in the steelworks. You could play against your bosses on a level playing field, scores could be settled, and tales created that become folklore.

The fly half position in a team can be seen as the creative heart, the improviser and the brains, and I wanted the characters to reflect the essence of being brave, playing with flair and risk and ultimately going for it by 'running with the ball'. This was key to the play's structure.

What was unexpected has been the many theatre-goers turning up to a rugby club to watch the show Two seemingly unconnected communities meeting for the first time to watch a play and share a drink afterwards has been one of the highlights. The stories shared after the performance are a vital element of this process: a true part two of the experience.

Gary Lagden is an actor and writer.
http://garyolag.simpl.com
Tw @FlyHalfThePlay