Greg Klerkx believes that everyone has a story to tell, which he proved with a digital literacy project in Portsmouth. 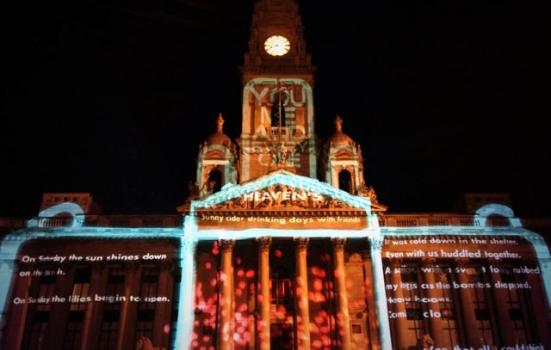 Convincing ordinary people that their stories can be a literary inspiration is a challenge, yet one that can yield huge rewards in terms of literacy, confidence and community cohesion. These ideas were at the heart of ‘You, Me & Everyone' (YME), an ambitious project that took place earlier this year between May and October in Portsmouth. YME was conceived and produced by ReAuthoring, which seeks innovative ways to connect writers and audiences. The project was core funded by Arts Council England (ACE) and Portsmouth Council, with further support from the Portsmouth Cultural Trust and New Theatre Royal.

Since ReAuthoring was founded in 2010, it has focused equally on writers and audiences. We have a particular interest in writers who are not performers, or whose writing is not easily performable. Writers we have worked with have subsequently incorporated installation, photography and audio/video, and more performance-oriented techniques in their engagement with audiences. They have also gone on to work collaboratively at festivals. The result for writers has been greater confidence in their ability to promote their work as well as fruitful explorations of new forms of writing.

What would it be like to gather as many stories as possible from a community, filter them through local writers and then create a massive, interactive public display of the result?

Our writers frequently find themselves working with ‘found’ audiences: people who do not expect to discover literature in the course of their day-to-day lives, or who may not feel any meaningful connection with writing or even storytelling. Our work has happened in bus shelters, on beaches, in cafes and pubs, and in other non-traditional places and spaces. Whatever the setting, we pursue an ethos of exchange: audiences not only receive stories and performances, they contribute to them as well.

To this formula, YME in Portsmouth added scale: what would it be like to gather as many stories as possible from a community, filter them through local writers and then create a massive, interactive public display of the result? We wanted to gather stories in live settings but also digitally, the latter being a particular challenge in Portsmouth. According to Portsmouth Council, the city has one of the lowest digital engagement profiles in the UK.

One of the strengths of the project was the breadth, range and innovation of our story-gathering. To gather stories, YME writers rode local buses for a day, canvassed pub-goers, walked the high street and even stayed overnight in a 24-hour Tesco store. Working closely with New Theatre Royal allowed the project to engage hard-to-reach communities, including refugees and asylum seekers through the Haslar Visitors Centre, as well as schoolchildren, elders and minority cultural groups. Bestselling author Neil Gaiman, who spent his childhood in Portsmouth, also contributed to the project.

In the end, we gathered over 1,100 stories or story fragments such as: “I remember the pier fire too. I was there with my little brother and it was really scary.” We queried our contacts at ACE to see if they were aware of any other projects that had engaged so many people as contributors to a ‘local’ literary project; we also scoured the web for references. Based on that research, we felt confident and proud to describe YME as the UK's largest-ever crowd-sourced community story project.

The stories gathered became the inspiration for 36 separate pieces of original writing, with writers encouraged to move beyond their core form and experiment. The result was poetry, flash fiction, flash plays, even limericks. “My biggest surprise was discovering that I can write poetry,” said project writer Annie Kirby Singh.

Both the ‘inspired’ writing and the original stories and fragments from the community were ultimately given to digital artist Anthony Head, a veteran of creating artworks that use powerful digital projectors to illuminate grand structures. His canvas for the final event was the neo-classical façade of the Portsmouth Guildhall, which is 60 metres at its widest point and stretches nearly ten stories high to the top of its clock tower. “The Guildhall is a complicated building, full of columns, windows and carved details,” he said. “The challenge was to make a captivating artwork that also allowed people to be able to read and engage with the stories.”

A common approach to outdoor projections of this kind is to make a video film or animation, for example, a ten-minute piece that is automated and loops. For YME, Anthony created a piece of software that enabled him to scroll and combine the stories live during each projection event, while also mixing them with visual elements. This meant that in theory the display could be infinite, never exactly repeating as stories were called in as Anthony and audience members chose.

The final work was displayed over the last weekend of October. Audiences saw beautiful new writing about their community interspersed with the original, often equally beautiful everyday stories that inspired the project writers. “I’ve never seen anything like this,” said local teacher Kelly Boyland, who contributed a story from her teenage years and encouraged her class to contribute their own stories as part of their literacy work. “I thought this project was really inspiring,” said Sarah Cheverton, who runs the Portsmouth Writers Hub. “It shows that it is possible to engage large numbers of local people in a simple and powerful way.”

For us the lessons are still coming through. One surprise was the success of the project Facebook and Twitter campaign, which were built around the hashtag #youmepompey, and have spurred discussions with civic leaders about how to adapt the YME digital strategy and ‘feel’ to their own digital engagement efforts. But the biggest lesson is already clear: when people are given permission and space to tell their stories, the results can be truly spectacular.