Restrictions can be an inspiration for designers

Ryan Dawson Laight had to costume virtual productions from recycled garments, self-printed fabric and actors’ own wardrobes. Here he shares how he’s adapted and flexed his skills for these testing times. 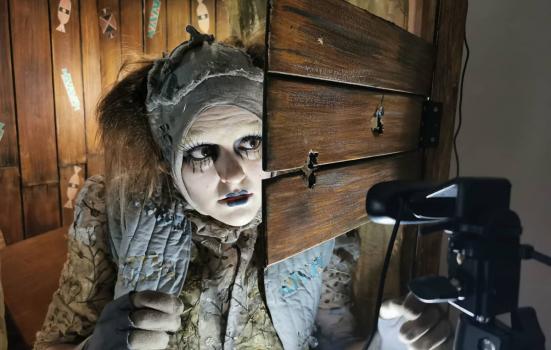 Like everyone else, my entire workload disappeared off a cliff edge in March 2020. In some respects this was a blessing in disguise: prior to this I had taken on too much, juggling multiple projects and working to the point of nervous exhaustion. I enjoyed slowing down and having time to refocus and recharge. Of course, lying in the sunshine in my garden was not sustainable long term and with time I wanted to do what I do best – create work. I was lucky enough to be working with Oxford-based Creation Theatre, which made the bold decision early on to move all its work online for 12 months.

The Tempest was chosen as the first online piece of work to be produced with Big Telly Theatre Company. In these very early stages, I was costuming people from their own wardrobes. The actor would open their wardrobe on a Zoom call and I would choose what was appropriate from there, trying to create theatrical (if not always terribly inspiring) costumes. When I look back on the five shows with Creation and Big Telly, I see we were doing something different, creating really interesting work that has evolved over time. I was taking back control over the distanced environment and over some elements of my usual theatrical practice: creating completely realised little worlds. For Grimm Tales For Fragile Times And Broken People, the most recent piece of work, I had actual small sets built for the actors to live in. The actors were so excited; they all videoed the delivery vans arriving. Imagine having a tiny theatre delivered to your house at a time when most actors were unable to act! I was delivering a playground to ignite their storytelling.

I wanted to do something for myself that also gave other people the opportunity to see what I do. I was looking to engage young designers - in fact any designers or makers that would like to look at the design process in a different way. This idea became “Backstage Design Workshop”. I didn’t know how the project would be received but thankfully it’s been a great success. People have joined me from all over the world, from a student designer in a cupboard in Athens to a swimsuit designer in Florida and her husband, Tiger. As well as hopefully providing and education and some artistic distraction and for the participants, Backstage Design Workshop gave me an opportunity to examine, develop and hone my own process in an unexpected way.

In the brief moment when we could suddenly work in person again, Chichester Festival Theatre’s large scale Christmas show was able to happen against all odds. It was tough, but they had everything in place to ensure we were well supported and looked after, including onsite Covid officers. The plan was to deliver Pinocchio with two casts of 40 children as a fully Covid secure production directed with social distancing in mind. It was thanks to this rigour that there were no Covid outbreaks in the company. There were also practical restrictions to the standard design process; shops were closed so we did a great deal of recycling and repurposing. This is a usual part of my process but the challenge of costuming a large-scale production almost entirely out of recycled garments actually enhanced the aesthetics. During this current lockdown, I worked with a graphic designer to design and print fabric – again, no fabric shops were open. The restrictions imposed upon us all have forced me to work in different and unexpected ways, realising my final designs through a whole new process.

Currently I’m working with National Youth Dance Company on another large-scale project involving more than 30 dancers. Because of the restrictions, they aren’t able to be in the same room and rehearsals have been fully virtual. Whilst you would think this would make designing more difficult, seeing each body move in isolation has been more useful than sitting in a studio for an afternoon just to catch short snippets.

The curtain will always rise at 7.30pm, virtually or physically. There will always be the same excitement and pressure to deliver my work. As we tentatively reopen, there are lessons we can hold onto moving forward. For me, this testing time has nurtured greater collaboration with colleagues to deliver the very best work possible, no matter what the restrictions are.

Ryan Dawson Laight is a designer for performance.

Restrictions can be an inspiration for designers