From an all-male ‘CarMen’ to a gay-themed Tosca, Robin Pietà reveals how Secret Opera is helping opera to shed its stuffy, elitist image and boosting LGBT representation in the industry. 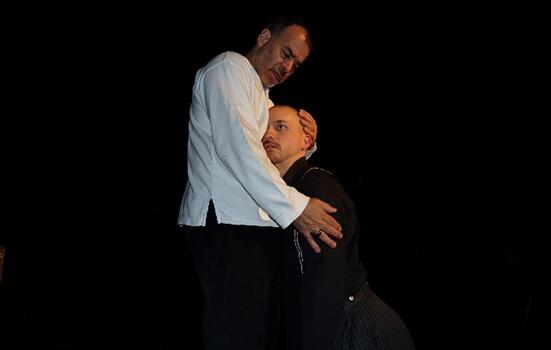 For some time now opera has been experiencing something of an image problem. While smaller opera companies do their best to dispel the well-trodden ‘elitist’ and ‘stuffy’ stereotypes by offering updated and pared-down productions in churches, underground stations and swimming pools, many bigger international houses have experienced a downturn in ticket sales over the last decade.

Despite cheaper tickets being offered at the larger London opera houses, opera attendance is dropping. The feedback from audiences is rather surprising. It’s not the singing, nor the set or costumes. It’s down to how believable we performers are in their characterisation. In other words, as opera singers, we need to be better actors, communicating emotions and situations that the audience can relate to and understand.

With nearly all operatic roles being heterosexual, the sensibilities of LGBT artists and audiences have always been our concern

Secret Opera is a pop-up repertory and training company, which since 2013 has put on over 150 performances in London and around the UK. With nearly all operatic roles being heterosexual, the sensibilities of LGBT artists and audiences have always been our concern. In 2014 we developed The Gender Project to respond to a clear lack of representation within the industry.

Our first and most important aim is to reimagine opera: to challenge traditional gender stereotypes by casting according to the vocal suitability of the singer rather than by gender.

Recently, we completed a full, traditional production of Madama Butterfly with a male soprano, Paul Bork, in the title role. As a classically trained singer, the innovation resonates with his own career: “The sense of ‘other’ has always been a cornerstone of my life, whether its relation was ethnicity, sexuality, gender conformity (or lack thereof in my case), or even singing. Whether repertoire choices or career viability, I have found virtually all of my soprano life to consist of legitimising roles I am asked to sing or convincing colleagues that I can be an asset rather than impossible to cast. My persona on stage (and sometimes off) has always trodden the line between genders… I hope that one day people can take their focus from what is (or isn’t) between my legs and actually hear me sing.”

Our second aim is to recognise and highlight the place of LGBT relationships in history and culture, even though they are not openly acknowledged in the setting and plotlines of most operas.

This links closely to our third aim of casting operatic heterosexual relationships as homosexual or lesbian to show that love and devotion are not limited to traditional perceptions. Often LGBT male and female singers have to ‘act’ being heterosexual in traditional opera, and we want to allow them to bring their own experiences and orientation to the same roles.

Until there is a body of operatic work that explores LGBT relationships, the most exciting and creative route open to companies that operate on a shoestring is to take existing works and see if they can be presented as such. These thoughts led to the development of an all-male chamber version of Bizet’s ‘CarMen’.

Set in the gay community of liberal 1920s Spain, José is the central character in an all-male reworking of the tragic opera. Sexually confused and dominated by a strictly religious upbringing imposed on him by his widowed mother, José’s journey could also be said to reflect the turmoil and tragedy still faced by too many LGBT individuals.

In our all-female ‘The Trousered Traviata’ many felt that having ‘Mother’ Germont was much more successful than ‘Father’ Germont in the context of the story. We are currently developing Tosca as a gay-themed production with a male lead and Otello, in which we highlight the bisexuality of Iago.

We have also just begun a consultation that will lead to presenting a mainstream opera as a loving, lesbian relationship, subject to the same prejudices and pressures as social inequality did when those operas were written.