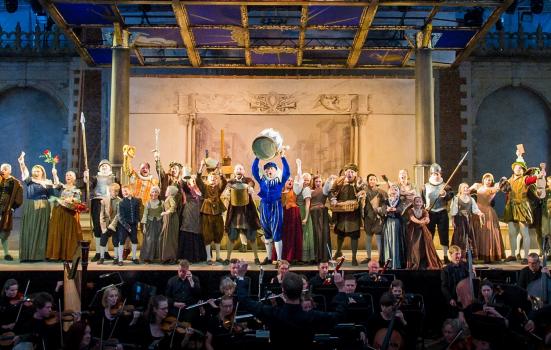 A performance of La Bohème at Opera Holland Park in 2016
Photo:

I don’t think I’m making an unreasonable claim when I say that Investec Opera Holland Park (OHP) is considered the most accessible among the larger summer opera companies in the UK, but I still think a confusion exists when it comes to the definition of ‘accessible’.

Opera is not inaccessible, neither as an artform in itself, nor in the public’s ability or willingness to pay to attend it. Our challenge is to persuade whole swathes of the population that they may like it – people, we should bear in mind, who may pay significant sums for other forms of entertainment.

However, it is true to say that we must reduce the risk element in trying opera out, as well as catering for the less well-off opera lover, by providing inexpensive ways to see it. At OHP our accessible ticket schemes account for 12% of our total capacity, ranging from free to £18 tickets. Beyond these ticket schemes, we do not discount our regular tickets.

Our first accessible ticket scheme at OHP, introduced over ten years ago, was free tickets for those aged seven to 18, including an accompanying parent for those under 16. This was joined soon after by an equivalent scheme for patrons aged 60 and over, aimed at mobile, active retirees who are not flush with cash.

In total 1,000 free tickets are given to young and older audiences per season, and both schemes are fully subscribed every year. Many parents have told us that introducing their children to opera for free has ensured their family enjoys opera before they invest in more expensive tickets.

In 2009 we introduced our INSPIRE tickets – over 2,000 tickets per season at just £18 each. These are good seats with unobstructed views and they sell out completely within a few hours of going online. Individuals are limited to four tickets per season, but this means a person can see the entire OHP season of four operas for just £72.

This year we have introduced a new last-minute ticket scheme for staff of London’s NHS, fire, ambulance and police services. It offers two-for-one tickets for any available seats in any price bracket, after 7pm on the day of a performance. We decided to begin this scheme with the emergency services for several reasons, but essentially it is just our way of thanking them for their dedication and rewarding hard-pressed service personnel. We may roll it out to other professions and services over time.

OHP is usually near capacity on the day so we can’t guarantee tickets will be available but we expect that those who qualify will check our website before coming. At least they can sit outside in the beautiful gardens and still hear the opera clearly should they want to.

A very important principle to us is that we should not try to be too prescriptive about who receives the free tickets and £18 INSPIRE seats. Our intention is to bring in a variety of people, not just the economically challenged, and to grow our audience base. We also want people to try out new repertoire, especially as we have a reputation for rarities.

There has been some debate about whether those who don’t deserve the cheaper tickets take them up, but we are wary of overly engineering our schemes. We regularly survey our ticket scheme users and the last data we received on the INSPIRE £18 tickets was enlightening.

Users cover a wide age range but a good number are retired (39%). Economically, 45% earn under £35,000 per annum. 43% said they could not afford a ticket at a higher price bracket and would be unlikely to buy more expensive tickets.

Over 53% said they were introducing a first-time opera-goer as their guest. As for motivations, 75% said that their reasons for applying for the INSPIRE seats were economical and 14% said they were exploring an unknown opera. So, we are as certain as we can be that the scheme is not being abused.

Price is not the problem

There is some consternation among the opera industry that despite accessible schemes, such as ours as well as other houses, the wider world’s narrative on opera continues to focus on elitism and expense. The problem is not price. It is a factor of course, but research has shown that opera is on average cheaper than West End theatre or even Premier League football.

The bigger problem stems from the public’s misconception of the artform and its representation in the media. As opera companies, we can but continue to provide access in economic terms, but as a nation we need to do far better when it comes to cultural education.