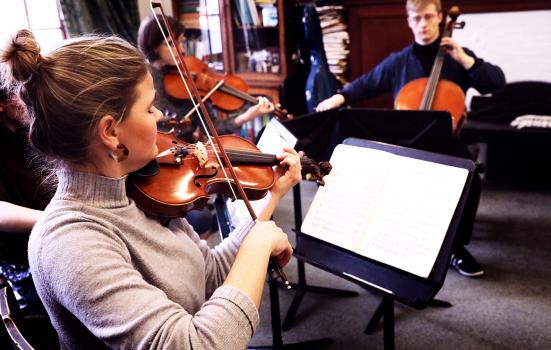 "A whole cohort of young artists now sees their future in the balance"
Photo:

I am one of the lucky ones. Alongside my freelance work as a singer and writer – of which I have none for the foreseeable future – I have a part-time post in Artist Development at the Royal Academy of Music. It’s a role that supports young musicians to nurture all areas of their artistry and abilities in preparation for sustainable careers in an ever-changing profession.

Having undertaken PhD research into how classically trained singers might gain more agency and creative autonomy in their professional lives, I believe passionately that self-knowledge and artistic adaptability are key for long-term survival in the performing arts.

Yet it is difficult to frame positively the catastrophic halt of the music business to final year students about to make the leap into their chosen profession. Young performers, conductors and composers are now left in a state of suspension, with uncertainty not only about when they will complete their final assessments, but also about the long-term viability of the arts organisations they want to work for.

A whole cohort of young artists now sees their future in the balance, though in truth, those futures were in the balance long before the current crisis. The scourge of Covid 19 has simply served to highlight the unsustainable precarity of life for many in the performing arts, and the fragility of the structures within which we work. So with the UK live arts in stasis, it’s time to reflect and to find a way of forging a better future for the next generation of (mostly freelance) performers.

Ever since our repackaging as the ‘Cultural Industries’, sector growth has led to a squeeze on funding, with too many organisations vying for dwindling resources. The word ‘creativity’ has become synonymous with doing more for less, in a profession stretched beyond its capacity. Survival for the less heavily resourced of Arts Council England’s (ACE) National Portfolio Organisations (NPOs) has meant offering as much ‘product’ as possible, for as little outlay as possible; survival for artists has meant working for incrementally lower fees, in real terms, in tandem with more hours of labour. ‘If I don’t do it, someone else will’ has been the pervading fear in the back of many artists’ minds.

Even before factoring in the enormity of the current crisis, the continued viability of our working practices has looked shaky. For years now, most arts organisations in the subsidised sector have been underpinned by a hidden army of adjunct subsidisers – the freelance artists who jostle to work with them. In my own recent work with NPOs I have been selected for prestigious music residencies that have offered no remuneration, and for which I have had to pay additional musicians out of my own pocket; I have developed theatre work over a period of time, leading to full production, for which I have never received a writer’s fee. I have done this willingly, in order to have my ideas brought to life in the public realm.

The artist’s need to find outlets through which to express themselves places them in a uniquely vulnerable position in the workplace. Musicians and creators have leapt to fill the void left by mass closures of recent weeks, transferring their output to online platforms, finding new ways to share their work, delighting the virtual world with their imagination and heart. While the new skills musicians and actors are honing on these platforms might prove invaluable for their futures as versatile artists, this comes with the caveat that nearly all the wealth of ideas and content has been offered for free. The urge to connect and adapt, to keep visible in order that we are not forgotten, is a form of unwitting self-exploitation, obviating the need for others treat us more fairly.

Now, with everything at a standstill, we have the time to question the accepted structures, in which salaried employees of arts organisations, however underfunded, have held the livelihoods of the freelancers in their hands.

When live performance begins again, the performing arts landscape could look very different. It will be smaller, and even less resourced than in the past. Some opera companies, theatres and orchestras may not survive, and the buildings that house them will be slow to return to anything like normal function. The current ACE strategy of supporting artists in the short-term will mean fewer reserves with which to bail out the behemoths.

With this in mind, I will be telling students at the Academy (by video meeting) that this is their chance to lead the charge towards a recalibration in working practices. The current crisis has shown us that music transcends circumstance; that when the structures around it are paralysed, the musicians continue to find outlets through which to express their music. The fact that their talents have continued to be so widely shared and appreciated demonstrates how much audiences, whether live or virtual, need and value what we do. It is the art they want, not the buildings.

If ever there was a moment for musicians and creators to slough off the despair generated by years of feeling undervalued, it is now. The public will be waiting for artists to conjure up the music and theatre for our times, wherever there is a spare patch of grass, well-ventilated room or online platform to set up shop. This is the time for a more DIY, artist-led approach, in which the makers and doers are front and centre, and unafraid.

I am not suggesting this is the path to riches - at least not in the short term - but by encouraging the new generation to dare to do it for themselves, we can subtly shift power away from the arts organisations, towards the art, and towards the artists who make it. That would represent a different, but no less valuable source of riches.

Interesting, but I do need to query the sentence "survival for artists has meant working for incrementally lower fees, in real terms, in tandem with more hours of labour." Fees for orchestras are determined through collective bargaining with the MU, and in relation to freelance orchestras, fees have not fallen below inflation tracked back to 2001.