Despite an incredibly difficult time for arts and culture in London, Justine Simons says the return of visitors to our world-leading cultural attractions is one of many reasons to feel optimistic. 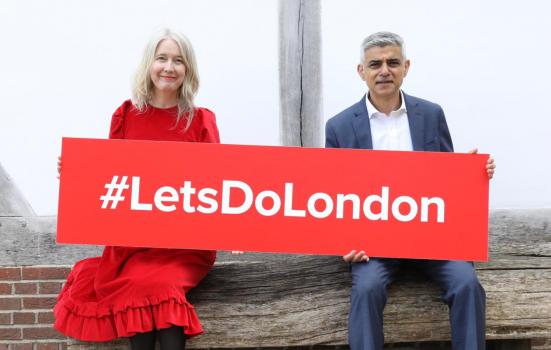 In the arts world, we’re all familiar with the term Renaissance - an incredible period of rebirth that brought rapid change and transition and inspired generations to come. And it’s true that new artistic movements, styles, ideas very often take shape as a reaction against major moments in history – poverty, economic crash, politics or war. So despite the massive challenges faced over the last year, as we start to see a path open up to post-pandemic world, could we dare to dream of a new creative renaissance?

After months of lockdown, our galleries, museums, exhibitions and festivals are finally reopening their doors to do what they do best: inspire us, entertain us and bring us together again. London is a powerhouse of talent, invention and creativity and this is exactly what we need to drive our recovery – not just in London but across the UK. Because when London succeeds the whole country benefits. So I’m proud that in the newly re-elected Mayor of London, Sadiq Khan, the arts have a great ally.

He genuinely believes that culture is our DNA in London and key to our success as a global capital. This was a message that was sent loud and clear when, together at Shakespeare's Globe, we launched his second term with the biggest domestic tourism campaign the capital has ever seen. It was an apt location, deliberately signalling the importance of culture.

Our Let's Do London campaign sees an unprecedented number of organisations and venues coming together to promote the capital. The Royal Albert Hall, London Zoo, the Science Museum, Tate, Southbank Centre, the Royal Opera House and the National Theatre are just a few of those involved, alongside a whole host of food and hospitality businesses.

Breathing creative energy into our public realm, David Hockney redesigned TfL’s iconic roundel ‘Hockney Circus’ in a special artwork as part of a takeover of Piccadilly Circus station. Yinka Ilori will take over some of our best loved streets with his gorgeous colourful designs and Es Devlin has planted 400 trees in a new a living forest at Somerset House for this year’s London Design Biennale.

It doesn't stop there. Night times will come alive at Shakespeare’s Globe with Midnight Matinees where performances start at 11.59pm. An outdoor film festival will be curated by BAFTA and the British Film Institute. Into the autumn, we can look forward to welcoming back our much loved and missed major creative festivals, such as London Fashion Week, Frieze London, the London Design Festival, and the 65th BFI London Film Festival.

Together as a city we are pulling out all the stops and writing a new chapter in the story of London’s resilience and renewal. Let’s Do London is both an invitation and a call to action – we want Londoners and domestic visitors to rediscover this great city, to build confidence, help audiences return – and critically boost the economy and support the many jobs across the whole cultural ecosystem, front and back stage.

And while we have a big focus on the hard-hit centre of London, over in east London East Bank is taking shape and will become the largest culture and education district in over 150 years. As the new home for Sadler’s Wells, BBC Music and the V&A as well as University College London and University of the Arts London's London College of Fashion, it will bring new types of jobs and opportunities to the area.

Then we have the new Eastbrook Studios that will be the capital’s largest film studios, boosting the local borough and London’s growing film and TV industries.  While linking London, the North Kent Coast and South Essex is our Thames Estuary Production Corridor, a series of large scale, state-of-the-art creative and cultural production centres across the estuary, creating thousands of new jobs.

Next year Lewisham will take centre stage as London Borough of Culture 2022. It will celebrate the borough’s rich history of trailblazing, using music, dance, public art and more to amplify voices and create a lasting legacy to inspire positive change, with a focus on the climate emergency.

Culture is essential to recovery

Some people will always say that culture is as an optional extra in the midst of the vast challenges we face. But that’s just short-sighted. Culture is essential to our recovery and the success of our city. It was creativity that saw us through lockdown – as Londoners painted pictures, sang and watched their favourite shows online – and it is creativity that will help drive our recovery.

But for all the £billions our creative economy generates, the tourism it attracts, the awards it wins and the soft power it brings on a world stage, we know that the sector is fragile. The pandemic has laid this bare and at City Hall we have worked hard to protect it during these difficult times.

Our £2.3m Culture at Risk Business Support Fund has helped some of the most at-risk small businesses within the culture and creative industry, our Culture at Risk Office has worked with more than 715 new cases since the pandemic started, and our Pay It Forward scheme helped businesses offer customers the option to buy goods and services in advance. And we are working with freelancers to develop the first freelancers charter to improve the poor working conditions that the pandemic has laid bare.

So can we dare to dream of a new creative renaissance? We can indeed. Now London is reopening, culture is again centre stage. Now is the moment to work together and send the message loud and clear to Londoners and people across the country that we’re ready. Ready to entertain, inspire and enthral once again. Let’s do London everyone!

Justine Simons OBE is Deputy Mayor for Culture and the Creative Industries.