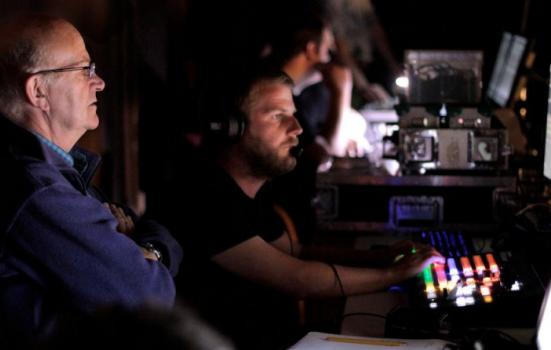 Live streaming ‘Waiting for Godot’ at Miracle Theatre in 2013
Photo:

The discussion of business models within the arts and cultural sector has grown in importance over the past few years. The fall in public funding for the arts (a fifth in real terms from 2007 to 2014) has meant that there is an increasing focus on earned income from other sources. The arts and cultural sector has shown some signs of being able to adapt to this challenge. Earned income, according to the National Campaign for the Arts, increased by 10% over the past two years. That is a healthy rate of growth but there is a growing opportunity in terms of where some of that revenue can be earned in relation to the exploitation of digital technology.

Research, which we did with Arts Council England and the Arts and Humanities Research Council as part of the Digital R&D Fund for the Arts, indicates that between 2013 and 2014 the percentage of arts and cultural organisations that felt digital was important or essential to their business models grew by 17% to over half of them. Those organisations were correspondingly more willing to innovate and try new approaches. There are a number of leaders within the sector that have embraced these approaches more than others. The Tate’s 2013 Digital Strategy emphasised that revenue could be built not just from conventional areas, such as ticketing and online shopping, but that a number of innovative approaches could be explored, such as multimedia tours to visitors’ devices and new approaches to fundraising through an analysis of the optimum point in user journeys to request donations.

The fund has explored a range of business models that could further the sector’s ability to rely on its own dynamism and enterprise, for both large organisations and smaller ones looking to carve out a niche for their work. The fund has also attempted to provide a space in which the ability to fail would not constitute a problem for the organisations. This has proved critical in the current funding environment when the stakes are even higher for project failure. The models and projects put forward sometimes fit into activities that are already taking place within organisations, while others have explored new business strands.

The benefits of familiarity with the arts and culture sector are clear. For a number of the business models the technology wasn’t necessarily cutting edge, but by focusing on the cultural sector organisations have had a marked advantage.

Art Fund, for example, looked at the possibilities around aggregating museum ticketing, in particular for museums and venues which do not sell advance tickets to exhibitions. This would in turn allow regional museums to track their income more efficiently, and build up a source of data about their visitors to market themselves to their key audience. While the technology is not cutting edge, Art Fund’s position within the sector led to a level of trust which could be exploited.

Similarly, Meyouandus trialled the use of interactive screens within arts venues to broadcast a mixture of programming and creative content. The technology used here is broadly available, but its status as a company with a track record of working closely with arts organisations means that it is now exploring options to grow a business arm for the work. Its early exploration suggests that building a library of interactive artworks that can be loaned or toured between venues to generate revenue could prove a viable approach.

In these instances the projects have brought pre-existing innovations and approaches into a business product where one did not previously exist. Having a familiar name, or being able to speak the language of the sector, has led to a potential market advantage in comparison to relative outsiders to the arts (larger commercial organisations).

A theme emerging from other projects is the ability of digital to target larger audiences than the core work would allow, thereby expanding revenue. Miracle Theatre, a small touring theatre in the south west of England, examined ways to increase its revenue through the creation of ‘theatre for screen’ productions. Rather than the B2B approach, this constitutes the arts sector reaching out directly to the consumer as a potential source of revenue. One of its productions ‘Tin’ was broadcast in 229 screenings across 15 cinemas, the equivalent of a three-month tour. Monetising this experience, so that the returns are higher than the production costs, is difficult though and not a simple bolt-on to the normal theatre experience.

Along with working exclusively within the arts, the organisations supported by the fund have also made interesting connections in other areas, particularly across education. NYMAZ, a youth music development charity, has explored one-to-one music tuition to remote settings through online technology, trialling the approach in North Yorkshire. It has the potential as a business model if it is picked up by a high number of schools in rural areas, and early indications are that there is interest from music education hubs in the UK to continue the trials.

One-to-one mentoring also forms the basis of the work that the Ministry of Stories does to develop an e-mentoring platform for creative writing called Story Engine. While its R&D work did not lead to a commercial roll-out, the results indicate that the platform, where children write and upload stories for comment by a dedicated group of mentors, allows for a kind of creativity that is not usually fostered in the classroom. A business model could look at white-labelling Story Engine and rolling the product out into schools, although this would still be predicated on commercial support from sponsors or a major funder. Branching out into education funding as another possible revenue stream also decreases the reliance on arts sector funding.

Having sufficient development funding to bring these ideas to commercial fruition remains a challenge. While many have proof of concept, with regards to innovative ideas and the potential customer or audience base, it may take another leap of faith to devote the necessary resources and time to capture the commercial opportunities.

Sam Mitchell is Research Manager in the Digital R&D Fund for the Arts at Nesta.
artsdigitalrnd.org.uk

This article, sponsored and contributed by the Digital R&D Fund for the Arts, is one in a series of articles on the theme Making digital work.