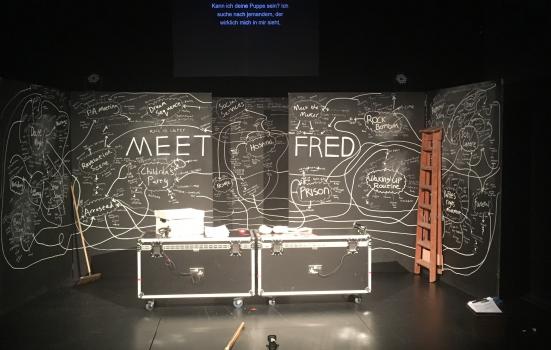 Germany is strategically an important country for Wales. It is our top trading partner, accounting for nearly 20% of exports, a total of £2.93bn in the last year alone. While the UK negotiates its exit from the EU, Wales is keen to demonstrate how art and culture will continue to connect people, particularly young people, to Germany after Brexit.

Wales is keen to demonstrate how art and culture will continue to connect people, particularly young people, to Germany after Brexit

The British Council’s UK/Germany season is a dynamic year-long programme that makes connections between the diverse communities and cultures in both countries. It aims to enable artistic dialogue and showcase and celebrate the most innovative and thought-provoking work face to face and in the virtual realm.

Our Head of Arts at the British Council in Germany put us in touch with Brit Magdon, Artistic Programme Director at the Societaetstheater in Dresden. Brit is the Director of the festival series Szene:EUROPA, which focusses on a different European country each year, with the stated aim “to get to know our European neighbours better and to communicate artistically about a common new Europe”.

Following initial discussions with Brit where she briefed us on the type of work she would like to programme, we invited her to see the Wales in Edinburgh programme at the Fringe festival last summer. Here she had an opportunity to see some of our most exciting performing arts companies, all supported by the Arts Council of Wales (ACW) and the British Council.

Brit then came to Wales in January to find out more. She saw more new work in Cardiff and held in-depth conversations with companies whose work she had previously seen in Edinburgh. After two days she was convinced there was a wide enough range of work that could be shown and that an eclectic mix would allow audiences in Dresden an introduction to the scope of work being made in Wales, and to the wide-ranging talent and innovation of our artists.

From this, we supported Brit and her team to programme the festival, helping with everything from securing the companies, to raising funds and negotiating travel arrangements. The entire team worked tirelessly to bring everything together for Szene:WALES in Dresden, a week-long festival between 27 April and 5 May.

The best of Wales

Gary Raymond in Wales Arts Review commented: “It would be a brave soul indeed who predicted bringing these shows together would work as well as they have done, but the German audiences have embraced the bombast, and have seen work that is without doubt worthy of this international stage.”

The curated programme allowed us to delve into our Welsh roots through the canonical text of The Mabinogion, and to showcase contemporary Wales and life through the eyes of young people. Naomi Wild from Adverse Camber said: “It was fantastic to see such a diverse range of work that celebrated the spirit and creativity of Wales.”

We are grateful to our friends in Germany who made such a success of our inaugural Welsh Performing Arts Festival, as well as to our valued partners at Wales Arts International and ACW. Dresden’s Societaetstheater has already commissioned us for a second season this autumn and we hope to build on that and replicate it in other parts of Germany too.