The magic of rural touring

Volunteer promoter Tom Speight writes about the joys of hosting professional performing arts right on his doorstep as part of a rural touring scheme. 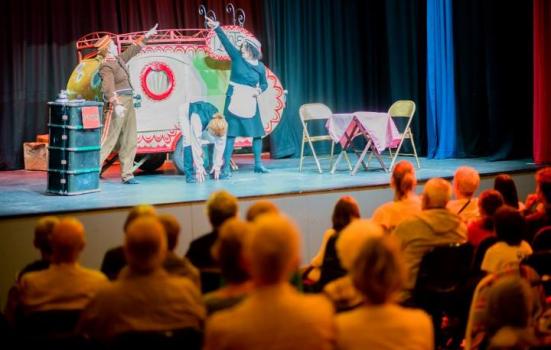 It’s the day of the show and I’ve got no stage. I’ve told the landlord of the Duke of Cumberland to expect more orders tonight. I’ve switched the heating on. I’ve counted out the chairs. I’ve loaded the lights into the back of my car. And I’m waiting for the performers to arrive at my hall, The Watson Institute, in Castle Carrock, a North Pennine village in the shadow of Hadrian’s Wall.

The kitchen storeroom doubles as the dressing room, the hall is nice and warm, there’s a wonderful expectant buzz in the room

This time it’s Bucket Club, a two man, two woman troupe who, along with their technician, are on tour from Farnham Maltings. Their play, sourced through the Highlights rural touring scheme which covers the north of England, is called Launch Party and is about ambition and the wrench of leaving home to live out your dreams. Perfect territory for rural touring.

But I’m worried about that stage. And the clock is ticking.

There are currently 28 rural touring schemes across the UK. Last year they put on almost 3,000 performances to a combined audience of over 300,000 people. Professionally run, they rely on volunteer promoters like me, in village halls and community centres, to share their passion for live performance and community engagement to make events happen.

The National Rural Touring Forum (NRTF) is the membership organisation for the schemes, promoters and companies involved. It runs its own showcases, enabling schemes and promoters to network and see diverse, high-quality work that is suitable for rural touring. In fact, Launch Party was showcased at the NRTF conference last year and then picked up by some of the schemes.

It also funds visits to arts festivals and, via its website and regular conferences, it provides introductions to rural touring for artists and companies, as well as advocating for the joys of rural touring. It’s currently involved in a brand new, three-year project to get more dance into rural areas.

Back to The Watson Institute. I discover on arrival that the play has been designed to be done in traverse. My stage fears subside. But delivering the show lengthwise is a first for my hall, just 12m by 5m. We work together to see how we can squeeze it all in.

The hall is a beautiful, idiosyncratic building; pink sandstone with a mock turret on one outside corner. It was built in 1897 as a reading room by the well-to-do of the village. It’s now the place where the calm of pilates or the click of indoor bowls shares space with the mothers and squealing toddlers or murmurings of parish council meetings, depending on which day of the week it is.

I dutifully set out 56 chairs along the two sides of the hall while my visitors set up their gear. They’ll be fed back at my home before the show. We’ll deal with the vegetarian request and house two of them for the night afterwards. I’ve found two friendly local families to help house the others.

The role of the promoter is a varied and wonderfully testing one. We’re all volunteers. Latest estimates put the number at almost 1,700, providing well over 100,000 hours of promoting time.

Des George has been doing it in the small harbour village of Aberdyfi on the edge of Snowdonia for 16 years and collaborates with Night Out, the Welsh scheme, in Neuadd Dyfi hall, a former cinema.

“It just seemed a good thing to do. I don’t really know why I started doing it,” says Des, a semi-retired 67-year-old businessman. “I enjoy putting things on, it brings people together. We do six or seven shows a year and we put on a village panto too. We sometimes make money on the show but that’s not the motivation. It provides a good night out for the village, it’s good for the village, and it helps us get grants for improvements too.”

Time to open the big wooden double doors. I know most of the audience. My home number has doubled as the box office. Some promoters shift tickets online too. People sit down and immediately start chatting to one another. They’ve either brought their own drinks or got them from the pub. Some places run bars and raffles.

I put on about six shows a year, mostly but not all through Highlights. I’ve gained in confidence and know what I’m doing. The kitchen storeroom doubles as the dressing room, the hall is nice and warm, there’s a wonderful expectant buzz in the room – just like there is at any professional venue. And then we’re off.

Twenty-three-year-old Becky Demmen grew up in the village of Antingham, north of Norwich, and was just 14 when she started to promote shows. Creative Arts East, the scheme in East Anglia, ran a project called Bright Sparks which supported teenagers at school to take on the responsibility of organisation and delivery.

“I’d always been involved in amateur dramatics,” says Becky, “but this was the first time on the other side, real event managing. Then my friend and I got a taste for it and wanted to do it again.” They went on to deliver another show. “Suddenly we were doing everything, we had strong ownership, it was really exciting, I remember people walking in and thinking, we did that!”

Becky has since completed a degree in Performance and Media and is now a freelance creative and visual artist and has returned to make films for Creative Arts East.

Launch Party turns out to be a fabulous evening as the show develops its themes. It wonderfully transforms the village to being the actual place where the characters are really from with clever local references. There’s live music, cheese wotsits, audience participation, party poppers and rapturous applause. The performers have to take a double bow before the lights go up.

And then the bit that always warms me. A big chunk of the audience stays behind to help clear up. This is their venue as much as it is mine. This is their pride as much as it is mine. I just happen to be the one who has accessed the system to bring the shows to our village through the magic of rural touring that nationally brought in well over a million pounds last year through the box office.

Tom Speight is a rural touring promoter and board member of the National Rural Touring Forum.
www.ruraltouring.org
Tw: @Ruraltouring, @tomspeight

The magic of rural touring