Life after Covid: who will survive? 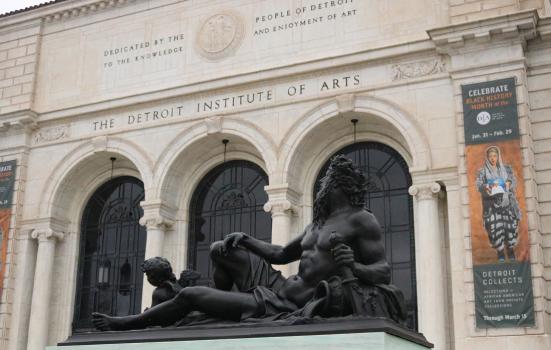 Detroit: the collective payroll of the regional arts and culture sector is around $10m per month

As the nonprofit arts sector and self-employed arts workers reel from the financial devastation of COVID-19, funders, at this very moment, are left holding a very hot potato. At this precise moment – literally in the next few weeks – they will be forced to make difficult choices they have never had to make before.

Should they continue supporting the same organisations they give grants to year after year, or shift focus to other, more vulnerable organisations? Should support of institutions be prioritised above support of self-employed arts workers? Should funding be prioritised for keeping viable nonprofits going, or for salvaging the assets of those whose only option is insolvency? Or, should capital be preserved for supporting the eventual ramp up of programming activity amongst those fortunate enough to survive?

Arts funders, working together, can be strategic in defining and deploying the kinds of capital that will provide equitable relief and opportunity to the sector as a whole.

Given the structural forces that marginalise most artists to the gig economy, it would be unconscionable for funders not to prioritise the basic needs of artists, creative directors, stage technicians and other gig workers whose livelihoods have been “cancelled.” Among the most vulnerable are teaching artists.

It is equally unconscionable that unionised artists on generous contracts with big institutions experience minor hardship whilst artists working as independent contractors lose their livelihoods. And there will be a reckoning for senior executives and artistic directors making the fattest of salaries; a 50% reduction in compensation for people making over $250,000 per year would pay a lot of artists.

The precise mechanisms for getting relief to artists must be worked out quickly. Unemployment benefits for the self-employed would be a start. Last week the Norwegian government voted to give independent freelancers 80% of their average income and allocated $26m to Arts Council Norway to cover loss of income for artists – just for the months of April and May.

Beyond relief we must consider if this is an opportunity to start a groundbreaking new work program for teaching artists and other artists working in community contexts, akin to the depression-era Work Progress Administration. Initially this might involve paying artists for virtual engagement with children and other community members, as the National Arts Centre in Ottawa has already begun doing, but could evolve into something much larger.

Could funders take up the cause of mitigating the harm stemming from layoffs? In Detroit alone, the collective payroll of the regional arts and culture sector is somewhere in the region of $10m per month. No one has that kind of capital. Even if the work stoppage were to last only three months, with sudden (and improbable) rehiring of all staff, there is still not enough capital to address even a fraction of the need.

Should stronger organisations with cash reserves be passed over for short-term assistance precisely because they’ve done a good job of preserving cash? This raises yet another set of thorny questions for organisations with endowments and board-designated reserve funds. When is it prudent to deplete long-term capital funds to reduce short-term hardship? When is it irresponsible? Should foundations penalise organisations who’ve demonstrated good capitalisation practice?

The amount of capital required to stabilise small and mid-sized organisations is an order of magnitude lower than the amount of capital required to stabilise large institutions. For the health of the ecosystem, it seems that stabilising small and mid-sized organisations should be a priority. As many of them rely on volunteers for all or some of their capacity, they may, in some respects, be more resilient than larger organisations with higher fixed costs.

It is possible that many organisations with fixed assets like buildings, long-term leases, and collections of art and artifacts will face a difficult choice between insolvency and selling or abandoning some of these assets. If electric bills cannot be paid and security guards must be laid off, our cultural infrastructure will be in jeopardy. The amount of capital required to secure facilities and collections would seem to be relatively small, but there might also be new opportunities in a softer market to acquire facilities at low prices.

A strong argument can be made for allocating capital for asset preservation, both to prevent loss of assets from foreclosures and insolvency sales, and to take advantage of rare opportunities to strengthen the sector's infrastructure.

Capital for gearing up again

Understandably, the sector is currently focused on managing down costs whilst keeping customers engaged. But the financial risks are also great on the upside of the recovery, when decisions about re-hiring staff, committing to venues, and making large deposits on artistic programs must be made in a highly uncertain environment. Over-estimating demand and moving too quickly could be disastrous, as cinema operators in China are learning this week.

As the sector moves into post-virus recovery mode, getting started again will require capital. The need will vary significantly from organisation to organisation, and might be addressed through a loan program with a generous pay-back timeline. It would be short-sighted of funders to deplete resources on short-term survival and show up at the recovery party without sufficient capital to re-animate our museums, galleries and theatres with high quality programs.

In many respects, cultural production can be understood as an ecosystem. In one important respect, however, the analogy fails. In natural ecosystems there is birth, competition for resources, and regular dying and repurposing of nutrients. The cultural sector has been prolific at birthing and vigorously competitive for resources. But we are lousy at dying and regeneration, lacking the structural mechanisms for end-of-life interventions short of insolvency. Thus, one might argue, the sector is long overdue for a mass extinction event.

With only a few months of cash on hand, at best, most arts groups live perpetually on the brink of extinction. There will almost certainly be a large number of insolvencies, perhaps hundreds or even thousands. The question funders must ask over the next few weeks is whether to allow these insolvencies to wend their way through the insolvency courts, or whether they might create a different pathway through the re-organisation process that does not require insolvency or dissolution. Putting themselves into voluntary administration might offer a structural alternative to some organisations who are out of cash but not laden with too much debt or encumbered by fixed commitments that require insolvency to resolve.

Or, large institutions might be funded on a case by case basis to take temporary responsibility for small organisations in their communities that are facing insolvency. Staring down their own massive shortfalls, it seems unlikely that leaders of large institutions will see this as a time for outreach and generosity to other, smaller players in the ecosystem. Regardless, funders might offer incentives to large institutions to support a system of trickle-down stewardship, as a local strategy for stabilisation and recovery.

Using capital to prevent insolvency will help to preserve assets, but there are many other reasons why a pool of capital is needed to assist solvent organisations with the inevitable restructuring, re-envisioning and wholesale re-invention required to deliver programs in the post-COVID-19 environment. Imagine, for example, if health officials begin lifting restrictions on public gatherings incrementally. First, gatherings of 100 are allowed. Then, a month later, the limit is raised to 250. But what if the 250-person limit persists for nine to 12 months or even longer? If I were a theatre or an orchestra right now I’d be thinking hard about a new, if temporary, business model in which small ensembles play in smaller venues around the community. Even in good times, new business models require capitalisation.

If anything, what we are witnessing now is a painful lesson in the downside risk of allowing an entire sector to delude itself about what a healthy balance sheet looks like. To their credit, funders have worked hard over the past 10 years to promulgate good capitalisation practice. We might not have predicted that a pernicious virus would destabilise the sector, but we most certainly understood the extent of vulnerability fueled by good intentions but pervasively weak financial discipline. The writing was all over the wall.

It is not only funders’ financial capital that is needed now, but also their intellectual capital, political capital, and social capital, and specifically their ability to influence public policy and to leverage resources from government and amongst individual philanthropists for the good of the sector.

After 40 years of community cultural planning it is time to go back to the drawing board if we have no contingency plans for stabilising and then re-capitalising a local arts sector after a crisis. There are valuable lessons to be learned from previous disasters – 2001 (9/11), 2005 (Katrina), and 2012 (Sandy). If anything we are learning that disaster preparedness is not just the ugly stepchild of institutional planning but a capitalisation issue at the sector level that must be addressed through policy, both public and private.

What seems obvious is that the long and capital-intensive process of re-building the arts sector after COVID-19 will be for naught if it merely restores organisations to the same precarious under-capitalised situation that they faced before it. Somehow, we must come out of this with an entirely new appreciation for the role of capital in protecting both artists and nonprofits from risks that are both predictable and unpredictable.

For arts funders, the moral dimensions of the COVID-19 crisis are heartbreaking but unavoidable.

Who will survive? Should women and children be given the first seats on the lifeboats, or is it every man for himself? Which cultural assets should be preserved and which should be allowed to perish? When is it morally justifiable to send large amounts of money to national institutions with privileged access to philanthropic resources?

Thinking both equitably and strategically about capitalising the sector at this moment in time will require funders to look at the sector through an ecosystem lens and make distinctions between threats to individual actors and threats to entire species.

The first step will be committing to a collectively-adopted framework for deploying capital into a highly-stressed sector, with one eye on the short-term and the other fixed on a horizon not yet in view, but considerably brighter.

Alan Brown is a principal of WolfBrown, a Detroit-based research and consulting firm serving the arts and culture sector. This article has been adapted from his original paper, A Sector in Peril: Philanthropy’s Role in Responding to COVID-19

Life after Covid: who will survive?