If I were 22: David Jubb & Tobi Kyeremateng

Battersea Arts Centre’s Artistic Director David Jubb offers advice to those just starting their careers, whilst his colleague Tobi Kyeremateng shares tips that she has recently put into practice. 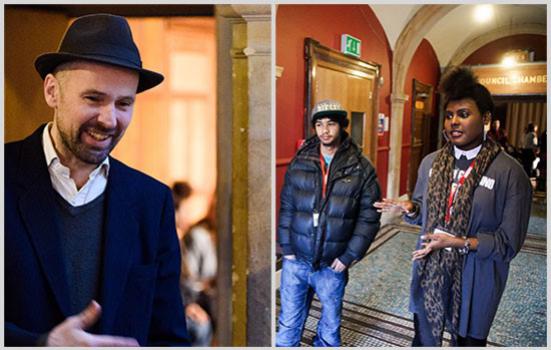 After I went to college at the now defunct Bretton Hall, I was a quiet postman, a committed milkman, an enthusiastic school teacher, an eager college lecturer, an angry post-grad student, a young parent, a knackered night-shift worker, a bad theatre director and a proactive venue manager. I was 30 when I became a theatre-producer at Battersea Arts Centre. It’s easy to look at the previous ten years as a bit of a mess. But actually, each of the jobs I undertook taught me invaluable stuff that has fed in to my work and my approach as Artistic Director of Battersea Arts Centre. So I would say to my 22 year old self, don’t worry, work hard and enjoy life, and be conscious that you might be searching for a career that you don’t even know exists yet. Stay creative in your approach and trust, as the renowned arts and education advisor Ken Robinson would say, that you will find your element.

I’ve always struggled with numbers, but this is now a fundamental part of my job and life in general. I arranged meetings with some of the producers at Battersea Arts Centre to run through a breakdown of their budgets and how things work; how are things formatted? What do certain things mean? How do you plan a budget? What are the things you need to think about? These are all valid questions that I know I can ask in a supportive environment. I also made myself a mock-budget at home that gave me a taster of what it is like to plan one on your own. Something I also found useful was thinking about budgeting creatively. I was never interested in the mathematical and logic-driven side of things, so I considered a budget as an alternative timeline to whatever I was planning – I found it a really interesting way to track a project and what was happening from start to finish.

As a consequence of doing a few different roles, I think I have constantly felt like I am busking it and that any minute the proper – milkman, teacher, director – is going to tap me on the shoulder and ask me to step aside. But since getting older, I have talked to people much older than me, and they still feel like this. In fact, in my experience, they are invariably the people whose work I respect more than some others. Perhaps it’s because they are prepared to show their vulnerability which means they are still learning. In my experience, women are much better at this than men, especially after the age of 40. So this advice is especially for 22 year old boys… don’t become a bore and sit back on your own assumed knowledge. Stay open and vulnerable and listen to others more, especially women.

For me, networking is the most awkward and daunting thing ever – I just never know what to say. To give myself a bit of confidence and stop myself from rambling on, I try to come up with three things I’ll say that will hopefully carry a conversation. These tend to be: Introduce myself, ask them something about them/their organisation and sourcing a way we can stay in contact.

When I was a nervous producer at Battersea Arts Centre, I met Joseph Seelig, founder of the London International Mime Festival. He nicknamed me Smiler Jubb. This was because when he met me the first couple of times I didn’t smile once and stayed quiet. My nerves stopped me opening up. Then after a couple of meetings, I never stopped smiling. He’s a funny man is that Joseph Seelig. Like any young person, I had ideas and a fresh viewpoint but I was too nervous to let go and say what I thought. I often recoiled into myself until I trusted the person I was with. So, 22 year old self, chill out a bit. Practice saying stuff more, say it to the dog if necessary. Because the sooner you become a bit more confident, then the sooner you’ll start smiling.

Tobi, your wise words, at the age of 20, demonstrate that we should all take more advice from young people rather than old farts like me. Your thoughts are relevant, practical, smart and empowering. I totally agree with you about budgets; even if we’re not in love with budgets, we are almost all in love with stories, and budgets can tell a great story. I could try and add something to your great networking tip: perhaps ask a few colleagues what they would say about you and your work, if they were talking to someone else about you. This might give you the basis of some objective and confident material about yourself that you could also use in that networking moment. For example, I would say that you have got a passion for finding emerging talent and you have a great eye and ear for identifying artists with a fresh perspective and voice.

I think sometimes we forget the people higher up have also had their own personal journeys, filled with luck, mistakes and learning. Reading your advice has given me an insight into your journey which, I guess, is kind of reassuring in a way – there’s a process to this. A lot of what you’ve said and experienced are things I’m thinking and worrying about now, and it’s OK to admit we’re not going to just wake up one day and be that thing we want to be. We have to find ourselves there – and maybe that’s one of the best things about it.

No right answers
If I were 22: David Jubb & Tobi Kyeremateng