I may be lying down but I'm not lazy

Raquel Meseguer triggered a security alert when she lay on the floor at the Southbank Centre. She shares the work she has been doing ever since to help arts venues become more welcoming to those with chronic pain. 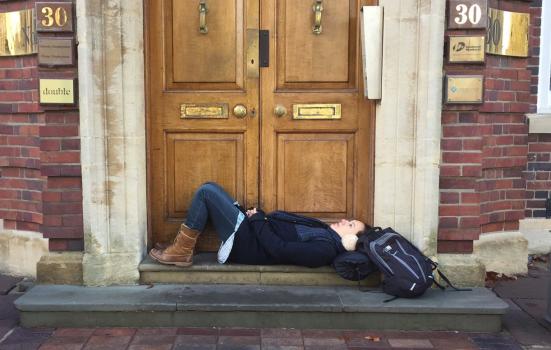 What does it take to become a cloudspotter? It may sound a romantic notion, but it’s a term I use for the thousands of people in the UK living with chronic pain from conditions that mean they need to rest and lie down at frequent intervals. I was a contemporary dancer, and one half of dance theatre company Lost Dog, when in 2007 I slipped a disc, leaving me with debilitating neurological symptoms. After a ‘time in the wilderness’, I began thinking about creating performances that explore chronic pain and interrogate the kickback I get for lying down in public spaces.

For me, some of my best thinking time is when I’m resting, so it’s about valuing rest as a form of contribution

I felt compelled to make this work following an incident in 2016 where I triggered a security alert by lying down on the floor at the Unlimited Festival at the Southbank Centre. If lying down wasn’t understood as an access issue in a space that is positive towards disability, then how was the prejudice to be countered?

Underlying cultural assumptions suggest that lying down during the day means you must be lazy. You’re enacting something very vulnerable and making yourself an easy target for negative responses. It prevents me from being in the world in the way that I’d like to be.

Working with the Bristol-based Unchartered Collective (made up of creatives, all of whom experience persistent pain), I sent out a survey to the disability arts community across the UK. I received 99 responses from individuals with a wide range of impairments, telling their stories of attempting to lie down in public spaces.

There were some shocking stories. It was heart-breaking to hear from someone who has for many years been lying down on public toilet floors, among the smells and the liquids, as her coping mechanism for being out in the world.

From the breadth of detail in the survey I identified a universal need. The reality is that lots of people police themselves, and some go to extremes to ensure they are not seen to have different needs. The stories could be summed up by one respondent who said: “The world is simply not designed for me. Or rather I am not designed to be in the world,” confirming my sense of a general cultural prejudice towards rest and the idea of not being productive all of the time.

A Crash Course in Cloudspotting

The stories from the survey form the foundation for A Crash Course in Cloudspotting, an Unlimited R&D commission. The audio-visual installation consists of two pods next to each other – one for lying down and one for sitting (or for wheelchair-users).

In real-time, it will create a link to people needing to rest in the moment, to convey the idea that when we lie down we can still contribute. In a symbolic way, it’s about shedding light on an aspect of human behaviour that is surrounded by shame. For me, some of my best thinking time is when I’m resting, so it’s about valuing rest as a form of contribution.

The idea of re-imagining public space to serve more people and challenging etiquette and modes of behaviour has caught the imagination. BBC Radio 4 Four Thought recorded a programme in November documenting the project and this will be aired very soon. My approach has been to look for playful solutions as to how venues might accommodate people with a requirement to spend time horizontal while ‘resetting’ and ‘recharging’.

One idea is that reception areas in venues provide a ‘reserve table’ style sign that reads ‘Resting in progress’, to make people aware that someone is lying down with intention and not as a result of being a social nuisance. I find that when I’ve the energy to explain to people, saying something like “Do you mind if I lie down, I have a condition” things go smoothly. But I don’t always have that capacity to communicate clearly with patience, and that’s when I hear abusive comments.

Another idea is that the back row of an arts venue has the cultural connotation of a space where a little naughtiness is permitted. So, if you need to stretch or stand up and move around during a show, you can go in the back row without disturbing other audience members.

The project hopes to encourage a more fluid use of public spaces that accounts for people’s differences. To that end, Unchartered Collective plan to trial a map of resting spaces in Bristol, hosted by Theatre Bristol and participating venues, in the hope that more public spaces will sign up to be a resting venue. We plan to develop the programme through workshops in venues across other cities to expand the map of resting spaces.

Raquel Meseguer is Founder and Director of Unchartered Collective.
disabilityarts.online/author/Raquel-Meseguer

A Crash Course in Cloudspotting (the subversive act of horizontality) installation is on display at Ovalhouse in London from Monday 29 January to Saturday 10 February. And there will be workshops and events throughout the year.

I may be lying down but I'm not lazy