A festival for all the senses 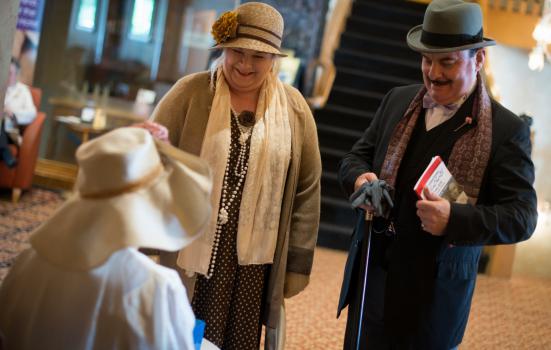 From the early 2000s Torbay has hosted an annual Agatha Christie Week in September. This happy ad hoc mix of vintage-style events, murder mysteries, heritage transport rides and talks extended the holiday season and grew larger each year. But Torbay also had ambitions to build a better arts infrastructure and develop cultural tourism. So in 2013, Torbay Council and the English Riviera Company sought and secured two years of funding from Arts Council England to transform the Agatha Christie Week into a major literature festival with international appeal.

The first International Agatha Christie Festival was held in 2014. Its Director, Tracey Guiry (CEO of Literature Works), invited contemporary crime writers to form the core of the festival while maintaining the traditional events as a fringe programme. On being appointed Director of the festival this year (the 125th anniversary of the birth of Agatha Christie) my challenge was to extend the artistic and literary programme further, incorporating two weekends to engage local people, while also retaining the support of die-hard fans, for whom a visit to Agatha Christie’s birthplace is an annual pilgrimage.

Local artists working in different forms are more aware of each other, mailing lists and social networks have grown

Agatha Christie’s life, literature and legacy were my core themes. Christie’s work is generally well-known, but I wanted to engage broader audiences through presenting multiple perspectives on the experiences, influences and impacts of an extraordinary woman who was also a musician, wartime volunteer, pharmacist, photographer, archaeologist, world traveller and collector. A turning point in my programming was the discovery that 2015 was also the eightieth anniversary of the Royal National Institute of Blind People’s (RNIB) Talking Books for the Blind service, an accessible literature initiative born out of a surge in the number of people blinded by conflict in World War One (Christie’s ‘The Murder of Roger Ackroyd’ was among the first recordings). Supported by the RNIB, I devised a theatrical ‘live documentary’ which was audio-led and often tactile. At various moments, the audience were plunged into darkness or asked to dip their hands into a bag to feel their way towards relevant items. The evening was a success with both sighted and sight-impaired attenders.

However, my reflections during the process of researching the event became significant, encouraging me to move away from the literary festival’s familiar panel talks and book signings and look for ways to engage audiences with a wider variety of sensory, learning and communication preferences. I wanted to find ways of engaging people who were not traditionally bookish through accessing the whole body and all the senses. So there were talks by Christie scholars and celebrity authors, but feedback reveals that many of the festival’s most popular attractions had a sensory twist: touching and smelling potent plants in a garden, smelling and tasting food in Christie’s own kitchen, thinking and writing at a Christie-esque ‘sturdy table’ with an inspiring view, walking by the sea and sitting on a lawn to enjoy a play, just as young Agatha did in the same spot. We also commissioned artworks that offered ‘mystery’ by unsettling, arousing curiosity and providing new perspectives on familiar experiences: a murder mystery dinner whose format shifted towards immersive theatre with food and an evocative ‘son et lumiere’ in the Torre Abbey gardens.

The newly formed Torbay Culture Board is pleased that the festival made a healthy start developing a more robust arts infrastructure and building an audience for cultural tourism. Over 5,000 tickets were sold, another 5,000 people attended free events and many non-attenders engaged online through projects such as 125stories.com. Disparate venues and organisations from theatres to hotels are now more likely to collaborate. Local artists working in different forms are more aware of each other, mailing lists and social networks have grown, and although more needs to be done to develop local awareness, the professional PR efforts ensured that the festival sparked a huge amount of global media coverage. Torbay is well set to establish itself as a cultural destination.

The challenge now, in more austere times, is for the festival board’s to find the necessary public funds to build on what has been achieved so far. I wish them well.

A festival for all the senses