Creating a production that allowed a young and inexperienced disabled British Asian actor to play an authentic character was a rewarding challenge that led to a rich experience for everyone involved. Pravesh Kumar tells the story. 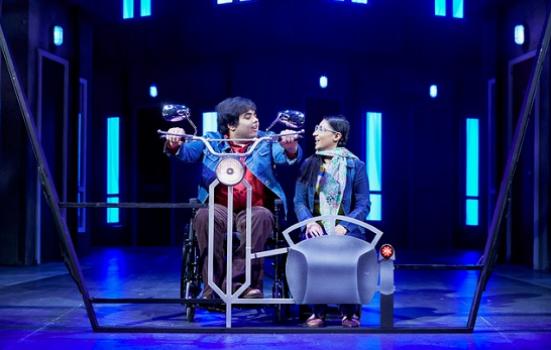 I established Rifco 20 years ago with a group of friends, among them Gurpreet Kaur Bhatti. The motivation for this came from the fact that there was rarely anything onstage that reflected our experiences of Britain.

Since then the company has been producing plays and musicals that reflect the contemporary British Asian experience. The company has gone from strength to strength, each year touring bold and ambitious pieces of work that encourage our audience to engage with conversations around taboo subjects such as honour, age, arranged marriage and sexuality.

The production Dishoom! was borne from a desire to tell the story of a British Asian boy growing up with a disability at a time of a national divide over immigration during the rise of the National Front. Rifco’s work always begins by reaching out to the community to engage with their stories and this was no different. I wanted to place a British Asian actor with a disability front and centre. As a company we wanted to embrace the Creative Case for Diversity holistically, pushing our resources and approach to inclusivity beyond ethnicity.

We created the conditions in which all actors could contribute equally ... and launched the career of an artist who might not have had access to this profession

Having commissioned Gurpreet, we put a casting call out for our actor, wanting to create an authentic character whose disability led the narrative. Via Twitter, our Casting Director Sarah Hughes chanced upon Bilal Khan, a young man living with Cerebral Palsy, still studying at school and with a dream to be the next Doctor Who. The story began to take shape of a boy spending his last summer with his group of friends, realising his inner superhero.

The casting process can be challenging due to the limited pool of British Asian actors across all age ranges, so we often cast younger, less experienced actors. This enables us to champion their development and Bilal was no exception. Over a period of nearly a year we invested in preparing him for the stage, working with him on the script and his acting craft. We also engaged a specialist vocal coach to develop his posture and vocal technique from his wheelchair and funded a training course with RADA.

Supported by consultants Access All Areas, the producing team met with Bilal and his mum to establish his personal and practical needs in rehearsal and on tour. This was his first time entering the workplace away from his family and school SENCO support so we felt we had a duty to address his emotional needs. We recruited a Creative Enabler, whom we termed ‘Buddy’. This person was there for his pastoral care, working with him backstage and responsible for driving him from venue to venue. The designer and production manager ensured the set incorporated wider access and egress, and the costume design was refined to reduce changes. We collaborated with our venues on tour to make adjustments backstage, utilising lifts, moving dressing rooms and creating accessible green room spaces.

As the project unfolded it became clear that our budget for access would be stretched due to our determination that our production would be led by this central character’s needs, so we turned to Access to Work (ATW) funding. The outcome of this application was positive and we were awarded around 96% of our total spend on Bilal’s support. The pressure on personnel resource was sizeable, not only in the maintenance and submission of the ATW application, but providing day-to-day support to the actor and the company, and the accompanying transport and accommodation logistics.

We are enormously proud to have conceived a production with disability its heart. We created the conditions in which all actors could contribute equally, told a story that needed telling and nurtured and launched the career of an artist who might not have had access to this profession due to ethnicity and disability. He left the project with an agent and a place at drama school. We would encourage all theatre organisations to conceive programmes that embrace diversity beyond just casting diverse actors. Diverse-led ideas are critical.

Our Arts Council England relationship manager Dipak Mistry summed up the success of the production. “Rifco have taken bold and ambitious steps in this production to work in a creative, entrepreneurial and challenging way to bring together a compelling and exciting show. The result is a much richer and accessible arts experience for all people. Rifco have proven that working in this way frees the artistic ambitions and develops exciting conversations with partners and the audience.”

We look back and see the enormous amount we achieved and how we are richer as a team for strengthening our approach to embracing diversity and inclusivity across our productions, audience and artist development.

Dishoom! by Gurpreet Kaur Bhatti was directed by Pravesh Kumar and was a co production between Rifco Theatre Company, Watford Palace Theatre and Oldham Coliseum.