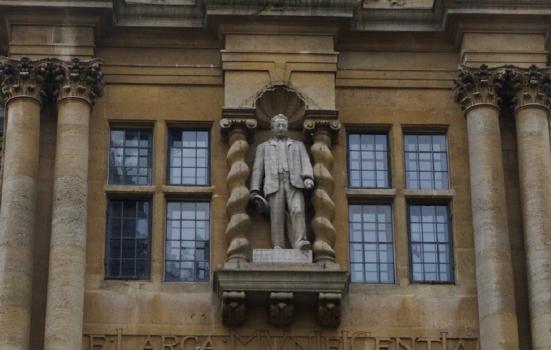 Lord Mendoza, the UK Government’s Commissioner for Cultural Recovery and Renewal, has a decision to make.

As Provost of Oriel College, he is waiting for the recommendations of an independent Commission of Enquiry on the future of the statue of Cecil Rhodes on the façade of Oriel’s Rhodes Building on Oxford’s High Street. In light of protests against commemorating this substantial donor to the college because of his imperialist past and racist views, Oriel’s governing body has voted to remove the statue, but is waiting for the outcome of the independent inquiry before potentially applying for the necessary planning permission.

But what is the value of this work by Henry Alfred Pegram, installed in 1911? Help is at hand.

The DCMS has been worrying about how to express the value of culture for nearly 20 years. On the one hand, the value of culture is precisely that – cultural. It’s about the experience of aesthetic, moral and emotional responses that cannot be directly expressed in economic terms. On the other hand, culture exists within a market economy and has economic effects. The difficulty lies in translating one meaning of value into the other. It is only when cultural value is expressed in economic terms that the DCMS’s funder – Her Majesty’s Treasury – can be confident that culture gives value for money. At present, the Treasury’s Green Book, its bible governing economic policy decisions, has no specific guidance on the matter.

The new DCMS document suggests the answer is to treat culture as a capital asset: the built environment, landscapes, archaeology, collections, performances, and performance spaces are assets that produce goods and services from which benefits flow. Some of these can be monetised as people buy tickets but other assets are public goods – entry-free museums or, for instance, the statue of Cecil Rhodes. It is a listed heritage object which can be seen at no cost (let us put to one side questions of aesthetic merit).

Although the document proposes ways in which the value of the Rhodes statue might be calculated – the asset’s life, the length of time during which its benefits will flow, usage of the asset, and the quality of the services it provides (bearing in mind that heritage assets often increase in value over time) – since it is free to see, calculating the monetary value of its benefits is difficult. To do this, the document must fall back on what is known as contingent valuation; this is a proxy for actual money changing hands. The most familiar methodology is a “willingness to pay” survey asking people how much they would pay for something – such as a heritage “experience” – if they were obliged to, or what compensation they would expect if it were taken away from them. Other methods calculate the travel time and cost it would take to visit the asset in question, its influence on local house prices, or the wellbeing the experience engenders. It would be interesting to know if Henry Pegram’s work has a positive or negative value in these respects.

How did the Culture and Heritage Capital Advisory Board arrive at its proposed “framework”? The answer lies in a second document, released alongside its 26-page report. This is a “Rapid Evidence Assessment” of culture and heritage valuation studies produced by an outside consultancy. The document analyses no fewer than 171 academic and government-produced “grey literature” studies that address the valuation question. Impressive as the number is, it is limited to English language reports from OECD countries. They were selected by “text-mining”, a form of electronic reading that preceded further human investigation.

This undoubtedly assisted the rapidity of the research, but two of the terms that were used to exclude documents during the text-mining process were “culture” and “value”. The result was an exclusion of all but “economic approaches for monetary valuation of culture and heritage assets”. There are 27 key terms, but “cultural value” is not one of them.

The contribution of the Rapid Evidence Assessment to DCMS thinking is circular. It excludes work that has tried to establish a more nuanced understanding of cultural value. By excluding all but monetary ways of assessing the value of culture, the framework for decision making can only be constructed around monetary values. This may help persuade Treasury to fund the DCMS, but even the Treasury’s Green Book acknowledges that public value concerns “overall social welfare efficiency, not simply economic market efficiency”. This includes cultural “effects” such as feelings of pleasure or pain, grief or ecstasy, that constitute an aesthetic experience – and which make a cultural asset important in the first place.

The most revealing argument in the DCMS report is that if no attempt is made to place a figure on the benefits of cultural assets, no monetary investment will be forthcoming. In practice, this has never been the case. To put a price on the statue of Cecil Rhodes is plainly absurd. If the DCMS is proposing a methodology that aims to be, if not scientific, then at least rational, it must be applicable to all heritage assets, including this listed statue.

It is clear the decision that will be taken about Rhodes’s statue will not be governed by a document such as “Valuing Culture and Heritage Capital”. The decision will be political and, in its true sense, cultural.

Robert Hewison is an art historian and former Professor of Cultural Policy at City University, London.

Great piece Robert - this is such an insane blind ally...