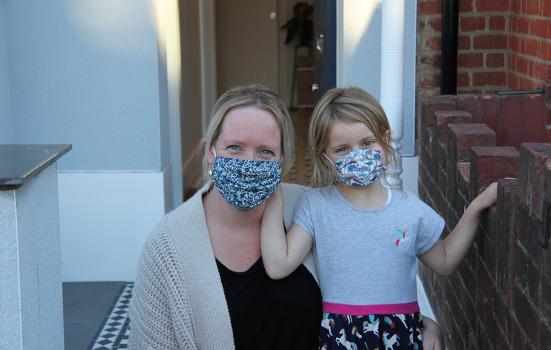 Coronavirus has put every company at risk. While we might not go bust by March 2021, my company needs me. And it needed me in March 2020 more than ever. But I also have caring responsibilities in my personal life and this has been exposed to the max by the pandemic.

I know I am in a fortunate position. Told by an Idiot is a very positive employer. I am in a position of leadership, have job security and live in a dual-income household. Covid-19 has put others in much harder positions.

Wherever you are on the scale, it’s been a dreadful 6 months.

Tear up the game plan

As lockdown began, and with our 2020-21 original plan for a mid-scale tour in tatters, our Artistic Director Paul, and I spent hours urgently mapping how we could re-work our year while retaining company values and USPs. We quickly realised that we would not be hunkering down. We would strive to stay delivering live theatre for an audience in the same physical space, all being together in the moment. The essence of what theatre means to us.

I began work on this plan for the first 3 weeks of lockdown. Or should I say, tried to.

The reality was that no-one in my house was getting much work done. I was becoming of increasingly little value to my own organisation as my four-year old daughter, who is usually in full-time nursery, was also trying to cope with the re-working of her year. Coping mechanisms included wetting herself on my Zoom calls and screaming so loud that no headphones were cutting it. I don’t blame her one bit. The whole situation was horrid and she was entitled to her opinion too.

My husband works for a financial technology start-up and was busier than ever. He is also (not surprisingly in comparison to the arts) the much higher earner. No matter how much scenario-planning we did, there was no getting away from the fact that I had to take the back seat, even though I run a business in an industry facing impending doom.

Reluctantly, and against every leadership instinct, I asked my board to furlough me. Or rather, as so often in a leadership role in the arts, I asked myself how I could make furloughing me work. I created and presented a plan highlighting cost-saving benefits and playing down the chasm created by a missing-in-action Executive Director.

I sobbed when speaking to my Chair about my furlough. I have an experienced staff and an Artistic Director with whom I am in complete synergy, but I was making a choice that didn’t seem like a choice. Nothing took away the sting of having to leave at a time when everything I had been working on was at a precipice. But my 4-year-old has an attention span on any given task – including watching TV before anyone asks! – that is less than 40 seconds unless I am completing said task with her. She was also at a cliff edge.

I returned in July, but here’s the rub: furloughing others on my return was not an option as other employees would need to have been furloughed for 3 consecutive weeks before the end of June in order to claim furlough support. This, seemingly arbitrary, rule has had a huge effect on us. Between March and June Told by an Idiot was peddling fast to deal with the Covid blow-out and the absence of the Executive Director. There were no ‘3 consecutive weeks’ of any other staff member’s time to spare.

July onwards was different in that it was planned (as far as anyone can plan). I was back and furloughing other staff members made financial sense. It would also have offered my staff a well-deserved respite on my return. But we were denied access to this option so, with my financial hat on, I had no option but to furlough myself again, albeit part-time. It was the only way to take continued advantage of the financial support from the government and therefore the most prudent thing to do. But it smarted. Being someone with caring responsibilities smarted.

I chatted to Cassie Raine, Co-founder and Director of Parents in the Performing Arts (PIPA), about my experience. She notes: “It’s been a very difficult time for everybody, but for parents and carers it has been and continues to be a particularly challenging time. From the surveys that we have done, 75% of carers and parents are thinking about leaving the sector. As a sector, when we look to ‘come back’, we need to really consider the needs of parents and carers and recognise the value in supporting them. The value of people who care”.

The pandemic has brought each other’s personal lives to the forefront. There’s no opportunity to ‘leave your personal life at the door’ as, on Zoom calls for instance, we’re already sitting in each other’s houses, one step away from a sleepover. People’s home situations, and in particular their caring responsibilities are no longer invisible. The sector needs to learn from this and take note. The current climate is as good a time as any to re-evaluate the nuances of how we all work together.

On a final note, it’s fair to throw into this conversation that I am a woman. Women have been far more impacted by the pandemic than men across all sectors. The fact remains that men earn more: the gender pay gap among full-time employees stands at 8.9%, little changed from 2018 and a decline of only 0.6 percentage points since 2012. Women are also the ones who remain predominantly the primary carers, and therefore the ones for whom it makes ‘the most sense’ for a family to furlough. Even those in leaderships roles.

And ‘the most sense’, sucks.

Jenni Grainger is Executive Director of Told by an Idiot

As a CEO of a visual arts org with two children under 7, I’ve found myself in exactly the same position. No matter how i tried to organise my time between childcare, home-schooling, looking after extended family, and leading an arts org through the last few months, it felt unmanageable, and I know has negatively impacted my mental health. The constant feeling of guilt for not being ‘present’ enough for either your children - who are experiencing an incredibly difficult time, as we all are - and the continuous demands of the job navigating this current situation, combined with the necessary shifts and demands for change and action within our sector has been overwhelming and exhausting. I would have applied to the Culture Recovery Fund but had zero capacity, energy and time to focus on that type of bid. Following months juggling childcare and work, the deadlines of 21 Aug or 4 Sep, personally felt like it would push me over the edge, where was the understanding or acknowledgement that children were still off school at this time? When I received the round robin email from ACE asking why we hadn’t applied, it simply highlighted the enormous lack of understanding ACE have for women with childcare responsibilities leading orgs at this time. I suspect very few men in similar roles felt they were unable to apply for the same reasons. My own experience, and that of colleagues in the sector has highlighted how it’s largely been women who have had to take on the lions share of childcare during the past few months - and it hasn’t ended. Despite lots of people talking like we’re getting back to ‘normal’ and venues re-opening, I’ve already had one of my children asked to isolate for 14 days due to a Covid case in their school, so again, it was me who had to manage my job and childcare again whilst her dad went out to work. I have questioned whether it’s a situation or sector I can, or even want to continue in, but for obvious reasons, leaving a job with any level of security right now doesn’t feel like a realistic option, so this feeling of guilt will continue and I’ll work unhealthy hours trying to manage both as best I can. Boards really need to understand the additional pressure a lot of women leaders are under right now and support them as much as possible, otherwise I fear we’ll regress even further in terms of gender representation and pay in senior leadership roles.
Hi Louise, Jenni here from Told by an Idiot. I just wanted to respond and also thank you for your reply to my article. It's amazing how guilty I felt writing this article, as I didn't want 'people' to think I hadn't coped or wasn't strong enough, or couldn't hack my leadership position and be a parent. It's wonderful (and yet, not) to hear from others that have been placed in a similar position. The ACE deadlines were insane and I was actually thankful that my company wasn't eligible (due to not being in a position of potential financial insolvency by the end of March '21). Sending sector solidarity - and fingers crossed our children are not asked to isolate anymore...... Jenni x