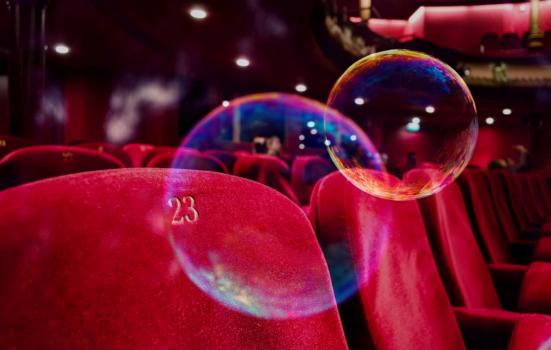 Last month, indie-pop band Love of Lesbian played the Palau Saint Jordi stadium, Barcelona. The concert sold out in hours with 5,000 fans hungry to return to live indoor performance – a greatly encouraging milestone. This test event organised by Festivals for Safe Culture was remarkable in other ways too. Though the usual capacity of the stadium is 18,000, the concert took place in the standing areas only, with no social distancing rules. Admission was conditional on a same-day negative COVID test undertaken at the venue, with the test result and the ticket holder’s ID digitally linked in an e-ticket issued through a compulsory smartphone app. Another requirement – the concert was open only to patrons aged 18-65.

The concept of a minimum age for some arts events is familiar, though not without controversy, but a maximum age is highly unusual. Even though the 66+ age group is probably not the core demographic for indie-pop, testing the safety of an artform by excluding older audience members is an approach that will sit uneasily in the UK, and would probably fall foul of the Equality Act.

Although everyone exploring novel practice to bring back live events is striving to do both the best thing and the right thing – this remarkable restriction is a reflection of the difficult choices to be made in getting back to full houses.

In England, all being well from the middle of next month indoor events can be performed before audiences of up to 1,000 or 50% of the venue’s capacity – whichever is lower. Legal limits on social contact will be removed no earlier than June 21st. Could that mean 100% capacity from the same date? It’s not clear.

According to Arts Council England, the government “hopes” to lift restrictions at this stage pending the outcome of research. Stepping up from 50% capacity in May to 100% in June would be, by some measure, the fastest restoration to full houses of any country in the world. I’m an eternal optimist, but not yet confident this will come to pass and, at the time of writing, arrangements for the other nations of the UK remain unclear.

What’s different about the seated events being placed on sale now for enjoyment later in 2021/22 is the presence of a “known unknown”. For performances from the summer or autumn onwards, it is likely that more capacity will be legally saleable at the end of the sales cycle than there was at the beginning. We just don’t know by how much or when the limits will change.

The solution being adopted by most commercial producers is to put on sale 100% of seats with no social distancing, lobbying hard for the best while planning behind the scenes for the worst. This determination to both safely and quickly get back to 100% capacity is vital to bringing audiences back worldwide.

But projecting confidence to drive confidence involves a finely balanced calculation of risk, with potential fallout landing with the venue that would bear the brunt of customer contact around exchanges and cancellations. So others, particularly subsidised or producing houses with loyal frequent attenders, may hesitate at this approach. So what other option is there?

The innovative approach of selling seats in fixed ‘bubbles’ was a godsend to venues with staff on furlough, using software to facilitate self-service purchase while maintaining social distancing requirements. But it’s time to assess whether they are still fit for purpose.

Fixed bubbles have obvious inefficiencies built in. Customer choice is limited not only by total unsold inventory and availability by price band, but also by available bubble sizes; some bubbles may go unsold even though there is still demand; and social distancing requirements make solo arts attenders expensive for venues to accommodate. This has been tolerable, under the circumstances, but less tolerable is the impact on people wishing to book alone.

At Baker Richards, we have monitored numerous socially distanced sales patterns over the past year, and bubbles of 1 have often been among the first to sell out, have been disproportionately located in higher price bands (effectively creating a ‘single supplement’) and have all too often not been the best seats in the house.

The great strength of fixed bubbles during the pandemic – that they show the purchaser what to expect in terms of social distancing – is now their weakness. As capacity increases, the seats which at first appeared off sale may later be activated and sold, potentially breaching the cultural compact with audiences.

Zoning in on a solution

In Australia, social distancing requirements are set at state level. In New South Wales, when the limits increased from 50% to 75% the permitted gap between households dropped from two seats to one – a nightmare for fixed bubbles.

Sydney Dance Company have demonstrated the clear alternative. Seats are sold in zones, so while customers can’t choose a specific seat, they have a good indication of the area they’ll occupy. Expectations aren’t locked in too specifically, though patrons with access needs can make their requirements known in advance.

Ahead of the performance, specific e-tickets are allocated by the box office, with each zone front-filled. Space is left at the back of each zone to which patrons can move if they feel they need more distance on the day. Sales are ahead of target, feedback is positive, and the model is working.

Sydney Dance Company’s Head of CRM, Heath Wilder, speaking to my colleague David Reece, explained his approach to achieving the 75% capacity permitted and maintaining a 1-seat gap between each party.

“I knew that the only way to do this would be if the average number of tickets per order was 3. One solution would be to have seats in “pods” of 1, 2 and 3, but the maths means that you still have an average of about 66.7% and you lose seats when people don’t fill a pod which means less income.

“So instead, we sold tickets on a general admission basis for each price zone in the house and encouraged customers who had booked in pairs to bring a friend to achieve the magic number 3. Once all orders were in, it was then a big game of Tetris, seating people in blocks in the optimal combination to achieve physical distancing and fill all available capacity.”

The additional revenue from optimising capacity, and the inherent flexibility in this model, more than pays for the additional staff time. What’s more, as people are inherently more comfortable sitting in friendship or family groups, the relaxation of legal social distancing rules presents an opportunity, as in the case of Sydney Dance Company, to encourage people to visit in larger groups. So now is a good time to reassess membership and loyalty schemes. Does yours incentivise members to bring a friend, and offer maximum flexibility if things don’t work out? If not, this is the time to look again at member benefits.

Culture Restart data shows that, between lockdowns in 2020, venues got communication and safety right. Audiences, after attending a cultural event, felt more confident about coming back again. Our work with the Insights Alliance Culture Restart Tracker has shown that venues that set clear expectations AND meet them has played a big part in growing audience confidence.

Continuing to meet this high standard has never been more important. The problem now is that expectations will be set at booking, but then things could change.

Clear communication of what audiences can expect at the venue remains vital, but every bit as important will be the clarity of your expectations of the audience. Collectively feeling safe once again in the presence of 5,000 strangers is ultimately on all of us, whether aged 8 or 80.

What is market research?
Dynamic pricing on trial: guilty or not guilty?
Emotional resilience is the key skill for 2022
Rishi isn’t coming to the rescue
Bursting the bubble: where next for socially distanced seating?
What can – and should - you charge digital audiences?
Maintaining focus in the eye of the storm