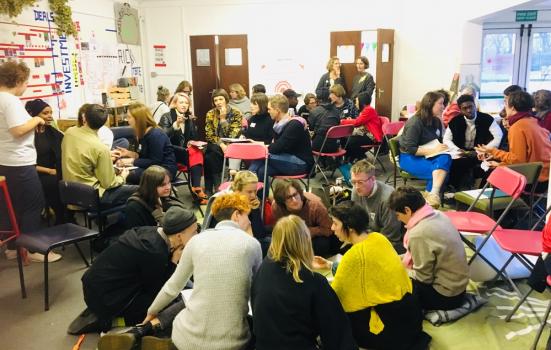 A Migrants in Culture workshop

Migrant cultural workers know what it means to wait for the Home Office’s letter for their visa renewals. We know how it feels to be told that we don’t fit the eligibility criteria for grants because we have not been in the UK long enough. We know what it means to work triple hours to put aside the money needed to pay for our legal status applications - or to rely on friends, family and others for such support. We have first-hand experience of studying for the ‘Life in the UK’ test and finding out that, contrary to the lived memories of our own families, post-coloniality was ‘an orderly transition’.

We have to endure our colleagues’ ongoing disregard for the Windrush scandal as something far from the arts, when it was at the very centre of our private lives. We have to listen to leading arts organisations say ‘we have already programmed work by migrant artists this year’. And we remember the feeling, on 24th June 2016, when the world changed after a referendum whose campaign said we were ‘the problem’. A hostile environment means a culture of hostility in which we make, collaborate and work. We were left thinking that we in the cultural sector weren’t strong enough, that we were overreacting; but then we met others and understood that we should look at migrant-led movements outside the cultural sector and learn from them.

In November 2018 a group of migrants and people of colour working in art and culture started meeting to discuss and share the effects that the Government’s ‘hostile environment’ policy has been having on their lives and work experiences. In the process we formed the action group and support network Migrants in Culture (MiC) and met regularly with other migrant-led grassroots organisers to contribute the skills of cultural workers to the wider movement and to map our shared experiences.

MiC aims to hold the cultural sector accountable to migrants, citizens of colour and all other people affected by the immigration regime in their workplaces and neighbourhoods. As we say on the MiC website: "We live, work and pay taxes in the UK, but have no political representation. We work in economically and legally precarious workplaces, where we are invisible or hypervisible. We refuse to be tokens of internationalism or diversity without a voice in our sector. Together we use our skills and resources to change the way the cultural sector operates." Over its first year of life, the group has been running workshops across England on power and representation, hosting monthly public gatherings, participating in roundtables on Climates of Hostility and sharing personal accounts.

We have also produced research-based evidence of the extent to which the hostile environment, operating at the intersection of migration and race, continues to be invisible yet formative in the cultural sector. This policy, with its set of administrative and legislative measures, was launched in 2012 and later legislated in the Immigration Act 2014 and 2016. It has been operating at a structural level, creating cultures of outsourced border controls and building a deeply unequal, discriminatory and precarious sector for migrants and people of colour. It reproduces forms of discrimination that feed off lack of knowledge of migrant and diasporic communities and basic human rights, concealed by racist and xenophobic cultural policy that leads to feelings of anger, powerlessness and fear among migrant arts workers and people of colour.

The research brought together the experience of over six hundred cultural workers from across the UK.. Respondents talked of negative experiences of discrimination, lack of access to opportunities and the absence of financial, administrative, pastoral and legal support. It also found a widespread lack of knowledge on how the hostile environment operates in the cultural sector.

A new definition of diversity

As Arts Council England is reshaping its new ten year strategy and defining diversity for the sector, MiC aims to extend the definition of diversity to include legal status as a protected characteristic. The group is sharing practical tools for building a cultural sector that creates the right conditions for migrants to secure legal statuses. It is raising awareness of the specific needs of migrant cultural workers, tackling discrimination and racial profiling, creating structures for support, and actively resisting the immigration injustices and the hostile environment policy. It supports organisations and individuals in the cultural sector to create more equitable structures, policies and resources for those who self-identify as migrants, those with experience of migration in their lives, and those who are profiled as migrants, because of the colour of their skin or their accent, regardless of their legal status.

To support Migrants in Culture’s work, join MiC’s Activation Day, ‘Migrants make Culture’, taking place in partnership with the group Keep It Complex on 18 January at Raven Row, London. Or sign up to the newsletter and join a public meeting.