Agenda for a radical restructuring

The arts can survive, but it’s up to arts workers and participants to save and fundamentally change them for the benefit of all. Trade Unions must not allow a ‘new normal’ of devastated culture says John Gillett. 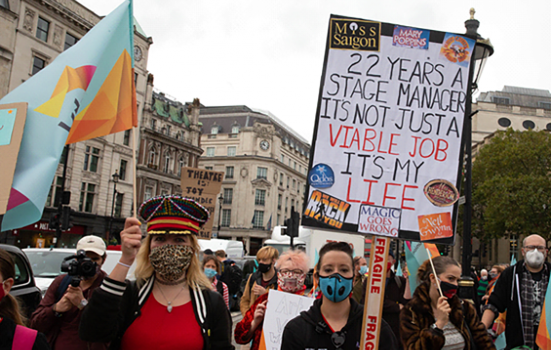 Equity/BECTU/ExcludedUK Panto Parade on 24th Sep protested at inadequate government support for performers and theatre as a whole
Photo:

First, austerity. Now, pandemic. Next, Brexit. None of these inevitably produce cuts, closures and income loss in the arts, but this government, as expected, is making specific choices about ‘essential’ and ‘non-essential’ industries, jobs and services.

These reveal and exacerbate the deep endemic problems within our arts and entertainment industry: the inadequacy of the size and distribution of its public funding, centralised and unaccountable funding structures, continuing inequality, and failure to respect and value creativity in society and jobs in the arts.

The UK bailout for the arts, £1.57bn – just 3% of Germany’s €50bn cultural bailout - is inadequate to keep organisations going.

This matches the disparity in European funding levels before Covid. The UK invested 0.3 to 0.6% of GDP in culture while EU countries provided 0.5 to 1%.1 So, France with a similar GDP and economic system to the UK, spent £9b whilst the UK spent around £2.1b in 2018.2

Germany’s culture minister has insisted that the arts are essential, not just ‘a luxury one indulges in during good times’ – very different from the attitude of our government and media reports, where the arts come third behind hospitality and sport.

The arts enlighten, inspire and entertain in every day of our lives. Through them we understand who, why, what and how we are in the world. They also improve mental health, enhance learning ability and confidence, and create £112b of revenue. The government ignores this essential role.

In the UK the Creative Industries Federation predict a ‘devastating and irreversible’ loss of revenue and 400,000 jobs: ‘a cultural catastrophe.’

Managements at the Tate, National Theatre and South Bank in London have already made the workforces pay with around 1,500 redundancies, and most low income employed and self-employed workers in the arts fall through the support nets.

Things were bad even before the pandemic. Many areas of the UK have little access to arts, are overlooked and not consulted, and in these challenging times deserve to have the stimulus of culture.

Local Authorities supply most arts funding nationwide, but at least 40% of them have lost arts departments due to government cuts.

91% of creative workers have worked for nothing and unemployment is high.

Trade Unions must not allow a ‘new normal’ of devastated culture. We need to argue urgently for:

It’s vital we also continue to promote our policies for a radical restructuring of the arts sector and its funding, as in Equity’s Performance for All and the TUC’s Making Culture Ours.

There are four areas where change must happen:

London has received up to 15 times more funding than other regions, and 82% of Lottery funding. 16 Portfolio Organisations receive over 35% of total ACE funding,) while the number of organisations receiving less than £100,000 pa has halved.

Democratisation of funding and accountability

National funding bodies like Arts Council England, struggling for legitimacy, claim now to promote inclusivity, diversity and relevance but have no means to achieve it. They are centralised, unrepresentative and unaccountable, using undefined and elitist notions of ‘excellence’ and a business model of efficiency to allocate funding, which they dispense and remove without transparency, ticking boxes.

Trades Unions are pushing these policies now; demonstrations are planned; workers are striking; MPs are lobbied collectively and personally; and petitions and surveys are sent to government.

The arts can survive - but it’s up to arts workers and participants to save and fundamentally change them for the benefit of all.

John Gillett is a freelance director, actor, teacher and author who was also a lead writer for Equity’s Manifesto for Theatre (2012) and Performance for All (2019), and the TUC Creative and Leisure Industries Committee’s Making Culture Ours (2019).

Agenda for a radical restructuring