Crises can bring out our best selves: let’s not waste yet another one

Post-Covid, the twin pillars of cultural policy should be social justice and environmental concern – but collectively we have been failing on both counts. Can this pandemic finally spur us on to make a better world, asks John Holden. 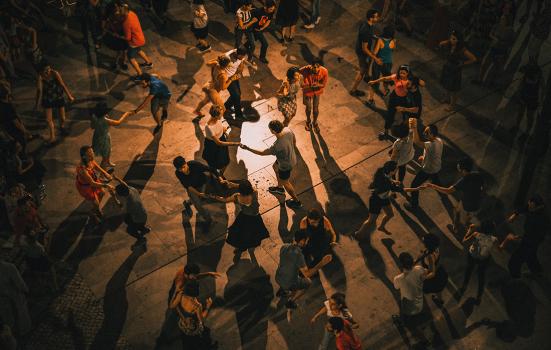 When we are living through a crisis there is always much talk about ‘learning lessons’, because ‘we are all in this together.’ Things will ‘never be the same again’. The clichés get trotted out by politicians and commentators, but the reality is invariably different. We don’t learn lessons – but we do change.

Two things seem to happen after a crisis. First, the shock gives politicians an opportunity to pursue their most outrageous agendas with a vengeance. 9/11 gave Bush and Rumsfeld the excuse to invade Iraq; the financial crisis of 2008 provided cover for ‘austerity’ and the dismantling or privatisation of the public sector. What will it be this time?

The second thing that happens in the wake of a crisis is the acceleration of pre-existing trends. In the cultural sector this is manifesting itself in a number of ways. The older generations are upskilling their technological abilities; the young are using technology to create. The parts of the creative sector that are online, such as computer games and TV, are thriving. While live filming has ground to a halt, animation is booming. Alongside that the do-it-yourself, homemade part of culture is running rampant, from choirs rehearsing and performing virtually (a poor substitute for the real thing, so the technology is bound to be spurred to improve) through to tik-tok, via live-streamed drawing and painting classes. All of this suggests a re-jigging of the mix between publicly funded, commercial and homemade culture, which was happening anyway, but will now be speeded up, often with the help of technology.

In the analogue world, when lockdown ends, how quickly will people rush to concert halls, theatres and cinemas in order to sit next to, and share an armrest with, a stranger? I think it could be some time. On the other hand, we will be desperate to meet those we do know, and we will also be longing to have some fun. In my own little village community we were due to have a dance in the village hall just as lockdown started – nothing fancy, just dancing for free to someone’s playlist with a good sound system in the village hall. I imagine that when we can put that event on again, people will flock to it, and they might be emotionally overcome to see their neighbours all in one big room. That dance will combine self-organised, ‘homemade’ culture with commercial culture (the music will be streamed from Spotify) and public/charitable culture (it will take place in a village hall supported by a local authority, but run and mostly funded by the local community through a charitable trust).

The unthinkable is possible

That shake-up – of more personal creative expression, greater use of technology, and a re-jig of the homemade/commercial/public mix – might be the only way in which things change, but could we at least imagine a different future? Might this crisis be different from the previous ones, and finally spur us on to make a better world? Can we, at last, ‘learn lessons’?

Maybe we can, because we now know that the unthinkable is possible. Before the coronavirus we were told that ‘there is no money’, that governments don’t have much power, that ‘you can’t halt progress’. Now we know that money can be found, or printed; that governments, when they act with our consent, can bring normal life to a halt; that we can stop, and clear the air, and hear the birdsong. Our need for cultural over-stimulation and our voracious appetite for spectacle have been shown to be unnecessary excesses. I hope that many people will, in a cultural sense, have gone deeper rather than wider during their enforced isolation.

But perhaps the most important thing that has happened is a general realisation of our fundamental equality in the face of a pandemic. No-one is immune: not celebrities, not royalty, not Prime Ministers. And who do we all rely on? A great web of our fellow human beings; not only NHS and care-home workers, but farmers and lorry drivers, plumbers and engineers. The penny has dropped in the most unlikely places, with even Cabinet ministers acknowledging that ‘key workers’ aren’t in fact hedge-fund managers, but nurses.

If we can hang on to that awareness of human interconnectedness (and even better, extend it to a visceral understanding of our dependence on, and our symbiosis with, the earth that nurtures life itself), then maybe, in the small corner of public policy that is concerned with the arts and culture, priorities will change. In a post-Covid world, the twin pillars of cultural policy should be social justice and environmental concern. There will be organisations and funders who protest that they already ‘do’ both of those. Of course some individuals and organisations take social and environmental justice seriously, but the data tell us that collectively, we have been failing on both counts.

The possibility of a re-set exists. We can return to basic principles and figure out where we should go next. The proposition is set out more fully in a recent piece written by Robert Hewison and ‘Three Johns and Shelagh’ (full disclosure, I am one of the Johns), where we propose that our arts and cultural system should be built on foundations of Justice, Accountability, Trust and Risk.

One of the cultural ‘hits’ of the pandemic has been a revival of interest in Albert Camus’ novel The Plague. I had the good fortune to study it in depth for French A-level, and came away with a lifelong conviction that, in spite of everything that gets thrown at humanity, and in spite of all our mistakes, somehow or other people on the whole manage to be good. Crises can bring out our best selves; let’s not waste yet another one.

John Holden is co-author of the report ‘ACE in a hole? An alternative cultural strategy for England’

Crises can bring out our best selves: let’s not waste yet another one
Three reasons why ACE’s new strategy won’t cut it
Escaping the catch-22