Autism should be seen as a cultural difference rather than an impairment, says Hayley Williams-Hindle. 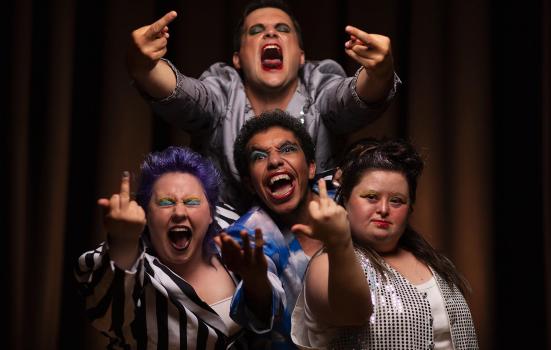 A performance of ‘Not F**kin’ Sorry’ by Not Your Circus Dogs and Access All Areas - a theatre company of learning disabled and autistic artists
Photo:

I’ve just returned from a lovely weekend in Derbyshire. Fifty strangers, all mums, of mixed ages, ethnicity and sexuality, and each of us autistic. The group aesthetic was typically ‘neurodiverse’: rainbow-striped and comfort clothes, clothes that cuddle or spark joy rather than high fashion. Amongst us were engineers, mathematicians, IT workers, musicians, a driving instructor, an HR specialist. Some there were unable to work due to mobility disorders, mental ill health, or weak executive functioning skills (which allow us to plan and execute tasks), and many others were struggling to find their niche in workplaces that rarely recognise the potential economic benefits of brain difference.

We laughed, drank, smoked, sat alongside each other in silence and discussed controversial topics – politics and religion – with cooperation and passion. It sounds unremarkable, perhaps. But the primary diagnostic criteria for autism includes ‘persistent difficulties with social communication and social interaction’, so the success of such a gathering is intriguing.

Recent studies have validated what autistics have known all along: a double empathy problem exists. In other words, the difficulties that define autism happen particularly when communication is between neurodiverse and neurotypical individuals, but not when it is within groups of all neurotypical or all autistic people. From this perspective, the deficit is not wholly autistic; we may not ever be fluent in your brand of human, but most often you’ve not even considered learning ours. Approximately one in 60 people are autistic but, as is so often the case, the narrative is defined by the majority.

We may not ever be fluent in your brand of human, but most often you’ve not even considered learning ours.

Humans have retro-fitted ape brains with long-standing instincts for in-group tribalism, and the sophistication we display in embracing initiatives for inclusion and diversity has developed in spite of those instincts. Recognising when our personal differences are cultural differences dampens our fear of the unknown and keeps our curiosity high. Think of how, for instance, we Brits are tribal about our respect for the sanctity of a queue and the correct way to make a cup of tea - heaven forbid the Americans boil water in a microwave.

Autism can also be understood as a cultural difference. There is a hidden curriculum of social information that is not directly taught but that we assume everybody knows. It’s this we have in mind whenever we say things like “it’s just common sense”, “that’s obvious” or “I shouldn’t have to tell you this”. The autistic cultural code is defined primarily by an absence of such rules. You may talk to me and not once catch my eye, and I won’t assume you are rude or dishonest, as most may. 68% of hiring managers say lack of eye contact is the biggest mistake at an interview, but for autistic people, that gaze can be confusing, intense and acutely uncomfortable. If you make an assertion that others think is blunt or rude, I am more likely to give you the benefit of the doubt and be curious.

Not understanding unstated rules or customs can make the world a confusing and frightening place for autistic people, making those of us who are not neurologically wired to automatically ‘get it’ feel isolated. But the other side of the coin, autism is neurological egalitarianism. Autistic people hold less intrinsic bias against others and, like other neurodiverse populations (dyspraxia, dyslexia, ADHD, dyscalculia, Tourettes) are more likely to operate from values of fairness and justice, rather than hierarchy and unquestioned loyalty. If you want to build diverse work teams, it’s a great idea to have a couple of autistic people on your hiring panels.

There is sound reason that autism is considered a disability. Sensory differences and anxiety make life very difficult for many. But let’s be clear: learning disability, though often co-occurring, is not autism. Arguments like Tom Clements’ that suggest the ‘neurodiversity movement’ is not inclusive of autistic people with learning disabilities conflate two separate issues. Non-verbal autistics also have much to contribute to this discourse.

A diagnosis is a luxury; it isn’t essential for neurodiverse communities to extend a welcome to you. Online and in-person autistic spaces provide an unofficial cultural translation club to parse social meaning for each other. Although heritability is not disputed and austistic genetic markers are being identified, diagnostic criteria are still unhelpfully based on behavioural observations. In the UK, the ignorance around presentation, especially in females, and the lack of affordable, available diagnostic services leaves many people stranded and feeling like aliens in a foreign land – Morks with no Mindys to guide us.

As a sector, we are getting better at making adjustments for neuro-disability, as is our legal obligation under the Equalities Act. Many venues now reliably offer ‘relaxed’ performances with raised lights and breakout spaces. There are also more neurodiverse artists being programmed. Frustration remains though; we’re not all artists. Many of us are administrators, marketing specialists, bookers, producers, technicians, customer service professionals, and all the other vital roles that go to making a public event a success – it’s these people who are rarely part of the conversation about autistic inclusion within our sector. Commitment to properly representative workforces requires joined-up thinking across all teams and stakeholders. Otherwise, recent strides made in public and artist engagement will ring a little hollow.

The fact that, even in 2019, 86% of diagnosed autistic college graduates are unemployed, presents us with an immediate challenge to embrace. Learning ‘autistic’ is a great place to start.

Hayley Williams-Hindle is a Clore Fellow 2019, a brain and behaviour change practitioner, and coaching and neurodiversity advocate.

When the best response is an angry one
Learning ‘autistic’