Part of the furniture

Dance company Motionhouse’s partnership with a furniture manufacturer is as close as it gets – they work side by side. Louise Richards explains how the unusual collaboration developed. 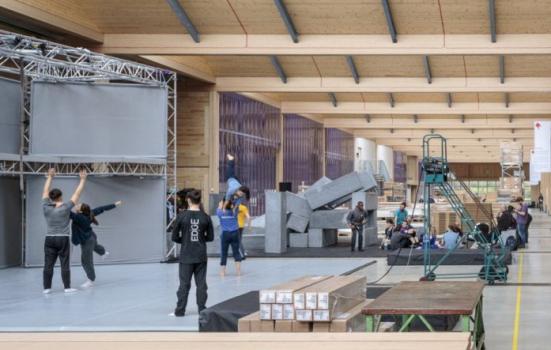 Motionhouse first met furniture manufacturer Vitsœ in 2013 when its directors were invited to Leamington Spa in Warwickshire by the then MP, as they needed to move the company from their London base to bigger premises. Kevin Finnan, our Artistic Director, met the directors, which was an important part of their decision to move to the town. They took the view that if a dance company that tours the world could thrive in the town, then so could a furniture company that ships products around the world.

A space to rent

There was a site available not far from our base in Leamington, and Vitsœ started making plans to construct its ambitious new building there. As they were planning the move, we kept in touch. During one of our meetings, Mark Adams, the Vitsœ managing director, mentioned that the building would be larger than they needed, and they were considering the idea of looking for a like-minded non-competitor to rent the space.

At the time, we were based in a warehouse about a 20-minute drive from our studio in Leamington, which was not fit for purpose, so the idea of moving to a beautiful new space so near the studio was very appealing. And so the idea was born.

Mark Adams and Vitsoe's Creative Director Jennie Moncur are long-time dance enthusiasts, and had always loved our work, so they were enthusiastic about the idea of us sharing the space – as were Kevin and I. It’s a wonderful building, with lots of natural light and ventilation, and at six metres in height, it works beautifully as a rehearsal space for us. We all knew there were risks involved, but all four of us were excited about the potential to explore the potential benefits to both companies that the cohabitation would bring.

We applied for a Capital Grant from Arts Council England to support the move and were delighted when in June 2017 we were awarded a grant. The legal side of things was relatively straightforward to sort out, because we all believed in the project and wanted it to work. We have a licence to use the space for five years with a rent below market value, which we’re very grateful to Vitsœ for. We moved into the space in January this year and are now finalising the technical installation.

Being in the space has changed how we work and how we create and rehearse. The building is inspiring and a wonderful space to be in. But more than that, Vitsœ's ethos, the creative community that has been formed, and the partnership we are building are stimulating, ground-breaking and visionary.

A dance company rehearsing in a furniture factory is a unique model, and when people visit they are amazed. We don’t know of any similar models, so there are no precedents to draw on or compare with.

But this is not to say that there are no challenges: we all went into the partnership with our eyes open. As it’s an open space, we knew that noise (music) might be an issue, and we’ve worked with Vitsœ to find solutions that work for us all. We tell the Vitsœ team when we will need louder music and they let us know when they have meetings when we need to be quiet. It’s about being honest and open with each other and having a dialogue to find solutions.

One of Mark and Jennie’s wishes when they designed the building was that everyone working there should eat together. Meals are prepared daily in the on-site, professional kitchen, and eating together has really helped build a sense of community and for both companies to understand each other.

The Vitsœ staff enjoy seeing what we are doing and we invite them to come and watch rehearsals. This summer, when the whole company was in Romania creating our large-scale outdoor show ‘Lumen’ for the lead-up to the TM2021 European Capital of Culture celebrations in Timișoara, some of the Vitsœ staff missed having us there.

An important part of the partnership is that each company has become an advocate for the other: we talk to each other’s visitors, our dancers have performed at Vitsœ events, and we recently hosted our thirtieth anniversary gala dinner there.

So far so good – both companies go about our business of creating dance or making furniture and then either shipping it or performing it around the world. My advice to others would be to not be afraid to take a risk and try out a new venture. But there must be a regular open and honest dialogue to make any such partnership work.

Part of the furniture